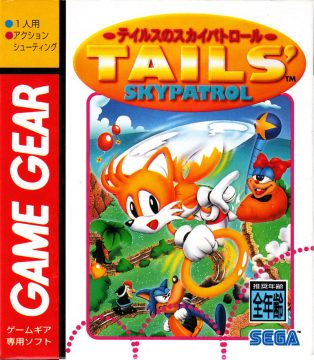 In the middle of all these 8-bit games were a couple of spin-offs based around Miles “Tails” Prower, the fan favorite character who debuted back in Sonic 2. These two games are among the more unusual entries in the series, as they were not only spin-offs based on a character besides Sonic, but they also played very differently from any Sonic game that came before or since.

The first of these games was Tails’ Skypatrol, a Game Gear exclusive that never saw release outside of Japan until its inclusion as an unlockable in Sonic Adventure DX. The game was developed by Japan System House (JSH)/Biox, a studio who worked on various 8-bit SEGA games during the 90’s (although credit was also given to SIMS, another studio in a similar vein, it’s ambiguous as to how much involvement they actually had, due to the abundance of pseudonyms seen in the game’s credits).

Tails’ Skypatrol has gotten a reputation for being one of the hardest games in the franchise, and an extremely difficult game at that. But while it can definitely be imposing and unfair at times, there’s actually a method to its madness, and underneath lies a pretty decent game.

Tails decides to head off on a little trip, and stumbles across an island that is currently under terror from the evil Witchcart. Alongside her henchmen in flying machines Focke-Wulf, Bearenger and Carrotia, she’s planning to take over the island and has turned everyone who opposes her into crystals. With nobody else in her way, Tails is the only one who can stop her!

Tails’ Skypatrol is a horizontally scrolling game where your goal is to get to the end of the level and defeat the boss lurking there. Tails is always flying, so the only way you can fend off enemies is to throw your ring at them. You can avoid obstacles by moving up and down, and can slow down and speed up by holding left or right respectively.

Unlike other Sonic games, you don’t need rings to keep you alive. If you get hit by enemies, you’ll start careening towards the ground, but you can mash one of the buttons to recover. In fact, the only things you have to worry about are keeping your flight meter replenished by collecting sweets, and avoiding the environments, which kill you outright.

This aspect of the game is where a lot of the criticism regarding Skypatrol comes from, mainly because of how unforgiving it is compared to other Sonic games. Trying to recover can be very tricky, especially if you were close to the ground when you got hit. The sweets can be pretty rare, and missing them can lead you into a dire situation where you have to kill yourself to get back to the previous checkpoint (which, incidentally, is a bell that you can miss) and recover your flight meter.

Accentuating this is the strangeness of Tails’ hitbox. Normally, character hitboxes are roughly the same size as the character’s sprite or model, but Tails’ hitbox seems to be significantly smaller than his sprite. What this means is that you can survive attacks that make contact with Tails’ sprite, but not his hitbox, and similarly fly right through items you were sure you’d pick up. It makes it difficult to figure out how to approach the game, since you can’t even trust where the hitbox is on the character.

There is a training area at the beginning of the game, so you think this would be the place to teach you how the game works and let you practice until you get it. Unfortunately, the area does a poor job at explaining anything; simply throwing various level gimmicks at you without much explanation; and it’s very easy to die despite the lack of enemies.

If you manage to survive the training area, you’ll be tossed into levels where you now have to deal with swarms of enemies that can easily overwhelm you if you’re not careful. These levels also like to surprise you, often resulting in cheap tricks that kill you without warning and forcing you to go back. It can be very frustrating, and it’s not at all surprising why Skypatrol is looked upon so harshly.

But here’s the weird thing: it’s actually not that bad a game. Yes, it can be very overwhelming, but you can eventually get used to it. If you keep pushing forward, and try to understand the game on its own terms, it becomes clear that there’s something to enjoy.

For a start, the game can be surprisingly forgiving. When you die, you automatically recover a good chunk of your flight meter, which gives you a better chance of making progress than you might have previously had. You have unlimited continues, and you only start at the beginning of that particular level when you run out of lives, so you don’t have to constantly replay previous levels.

Despite the cheap tricks, the levels offer up a good bit of variety. There’s different types of enemies that the game will use to test your ability to dodge and attack at the right time, from those with projectile attacks, to objects that fly in one straight direction, to enemies that fire in multiple directions.

The level designs often change between open environments to fly freely and tight corridors to keep you on your toes, and it provides a nice ebb-and-flow that makes each stage more interesting. These can even apply to the overall stage progression, with Metal Island being a lot more free and open-ended than the cramped Ruin Wood, before being followed up by the very tricky Dark Castle.

This all complements the core mechanics, which work pretty well. Despite the odd collision detection on Tails’ end, there are no other bugs or technical mishaps to be found. The controls are quite good, ensuring that you’ll be able to dodge and fire without much hassle. And while it’s not especially great, the gameplay is competently designed, and even rather compelling. In fact, it can be fairly easy to get into a zone where you brainlessly mash the ring at enemies and obstacles, while carefully thinking and moving to avoid the various hazards. It’s a strange state of mind, but it’s nevertheless satisfying to get into.

That said, there are still a couple of things that are lacking, difficulty be damned. The bosses all consist of chasing a flying enemy and attacking them till they go down. Each one has different attacks, but there’s not enough of a difference to make them anything more than repetitive.

The game is also really short. There are only five levels, which take roughly a few minutes to beat, and that’s it. No alternate routes to take, no difficulty options to change things up, no secret bosses to discover; nothing. There isn’t even a high score board to keep you coming back to better yourself or beat others, even though there is a points system in the game that it could easily complement.

Despite this, Tails’ Skypatrol manages to be a fairly endearing game, and the presentation is partially to thank for that. Graphics are bright and colorful, with a variety of backgrounds to keep things interesting, a smooth framerate that ensures the game’s playability, and adorably cartoony character sprites.

Meanwhile, the music’s a decent effort, focusing on simple melodies that convey a feeling of watching cartoons for very young children, which fits well with the game’s tone. The music was done by Chikayo Fukuda, whom fans of CyberConnect2’s games will recognize as the woman behind many of their soundtracks, such as the Naruto: Ultimate Ninja Storm series, the .hack games, and Asura’s Wrath.

Tails’ Skypatrol isn’t for everyone. People who aren’t expecting this kind of Sonic game, or can’t push past the obtuse training stage, will still be frustrated. And that’s okay, but it is possible to figure out how to approach the game, and the end result is a decent romp that’s worth checking out for fans of Tails and the curious.

The characters from Tails’ Skypatrol would appear in the Archie Sonic the Hedgehog comics near the end of its run, debuting in issue #276. Witchcart was now known as Wendy Naugus (Wendy supposedly being a nickname that came from the fandom), the twin sister of recurring villain Walter/Ixis Naugus, with Focke-Wulf, Bearenger and Carrotia as her loyal Witchcarters.

There’s actually an interesting story behind the development of Tails’ Skypatrol. According to the lead programmer (currently going by the pseudonym of Alice Kagamino), the game originally began as a launch title for an unknown, unreleased handheld system that was aimed at a younger audience with an educational focus. Tails didn’t appear as the player character or in any other capacity, since this game was intended to be an original work.

Although the game was fully completed, the handheld system ended up being cancelled. Luckily, it turned out that the Game Gear had very similar specs and the same resolution, so it was decided to remake the game there. It was at this point that Sega, having been visited by the business side of JSH, requested Tails be added to the game. A few extra things were included thanks to the increase in available ROM space, such as the training level, demo scenes, and redrawn character sprites.

Porting the game was quite difficult, to the point where Kagamino was hospitalized during development, but it was eventually completed. This new game was called “Boon Boon Kabun“, and was compatible with both the Game Boy and Game Boy Color. While the game was even shown to Nintendo, it had to be scrapped due to what Kagamino could only describe as “contract reasons”.

A translation of Alice Kagamino’s recollections of working on Tails’ Skypatrol, alongside other JSH projects – http://gdri.smspower.org/wiki/index.php/Talk:Biox

A forum thread looking into the credits of various JSH/SIMS projects, which led to Tails’ Skypatrol being considered a JSH project – http://www.smspower.org/forums/9383-WhodunitJSH