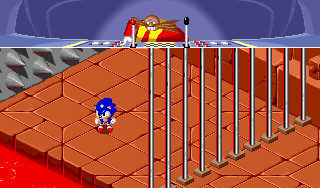 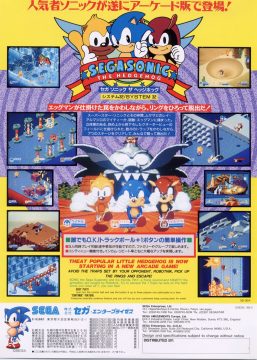 Sonic the Hedgehog was revealed to the gaming audience in 1991, and defined Sega for years to come. However, there was one major issue – the first game was developed for the Genesis, and while that helped cement the popularity of the console, Sega had been an arcade developer first and foremost. After all, Sega owned many arcades in Japan (and some in America), and if they wanted to use their blue rodent mascot in what was arguably their home turf, they needed a Sonic arcade game. Accordingly, they developed SegaSonic the Hedgehog on the System 32 board in 1993, which became one of the most obscure games in the series’ canon. The somewhat unusual title is due to the fact that Sega temporarily lost the trademark to the name “Sonic” and called him “SegaSonic” for a brief period to make him legally distinct. 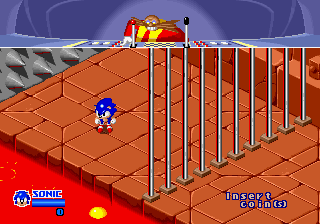 This game is unusual in many ways, one of which is how it breaks away completely from the console Sonic games, and instead is based around the “speed” aspect of the character. The game begins with Sonic being captured by Robotnik, but he quickly escapes his clutches and begins a long dash to freedom. You’re constantly being pushed forward throughout the entire game as you outrun disintegrating platforms, avoid flowing lava, or get chased by vehicles that threaten to skewer and/or squash you. There are barely any enemies and only one encounter that could even qualify as a boss battle, which essentially is a fast-paced obstacle course. There are seven stages in total to traverse, ranging from Volcanic Vault, to Icy Isle, to Desert Dodge, all the way to Eggman’s Tower.

In addition to Sonic, there are two other characters – Mighty the Armadillo, who showed up in again Knuckles’ Chaotix, and Ray the Flying Squirrel, who has unfortunately been largely forgotten from the Sonic pantheon. Both showed up again in Sonic Mania Plus in 2018. This is the first game (or any piece of media, for that matter) that gave a voice to Sonic and Robotnik. Here, Sonic’s is played by Takeshi Kusao, who’s most famous as the voice of Trunks in Dragon Ball Z.

Three people can play at the same time, though all of the characters play identically. It’s one of the only Sonic games that features a life bar, as you take damage from getting hit or falling off the screen. Collecting rings will restore your life meter a little bit, and you get a score bonus if you collect enough of them in a stage. 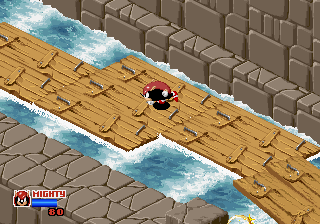 The view is displayed from an isometric perspective, with the characters being controlled by a trackball. Spinning the ball at different speeds will change how fast your character runs, but considering the pace of the game,  there’s little incentive to move slowly most of the time. The only other button allows you to jump.

The trackball controls are probably the single biggest reason why the game was never ported. They’re hard to adapt to another controller, especially without being significantly reworked. Further, one of the major selling points of the game comes from the excitement of spinning the trackball while outrunning something – that’s completely lost when you just hold a direction on a controller. It’s playable on MAME with the appropriate accessories, but getting it to function with even an analog controller is difficult.

Even then, the controls are a little twitchy. You can’t change directions in mid-air once you jump, and the perspective makes it a little difficult when trying to latch onto certain things, like swings. Additionally, like the Genesis Sonic games, your character will teeter on their toes if they come too close to the edge of a platform. You can’t just jump, however, as your character won’t respond. You need to spin back or in another direction and then jump, which can lead to frustrating deaths if you’re not quick enough.

Outside of the controls, though, SegaSonic the Hedgehog is one of those games that definitely feels like it was developed to be an arcade game. It’s mostly one big, long roller coaster ride, and pretty much involves just jumping and dodging stuff. What’s there is incredibly impressive, too, providing a constant sense of panic as you smash through jail bars, climb up mountains while avoid bursting water spouts, or otherwise just run like hell from danger. It’s also somewhat shallow, though, and doesn’t really lend itself to replay, with the game being over in roughly 15 minutes. Further, while it’s possible to attempt to one- credit-clear the game, the fiddly controls make this extremely difficult to accomplish, and there’s not much in the way of technique or strategy. Generally two or three screw-ups will kill your character, and there are no extra lives. 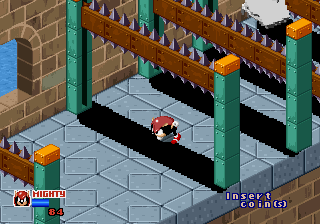 Still, the fast pace and tightly designed levels are impressive. The intensity of constantly being on the run is something that the 16-bit Sonic games were never really able to feature, either, and only became part of the core gameplay in the 3D titles, like the killer whale chase in Sonic Adventure, or the dash from the 18-wheeler in Sonic Adventure 2. In some ways the isometric perspective could be seen as a prelude to Sonic 3D Blast, though that game was structured like a more traditional console game. All in all, it’s a fun experiment.

It’s unclear if the game was ever distributed outside of Japan. However, some enterprising hackers actually found sprites in the ROMs of the Dr. Robotnik design used in the ABC Saturday morning cartoon, implying that it was going to be released in America as a tie-in with the series. There’s also some translated English dialogue hidden in the ROMs.