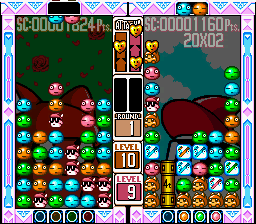 This game takes Ufouria‘s premise to create a blatant Puyo Puyo clone with Hebereke characters and Popoons instead of Puyos, which are almost identical anyway. The only real difference is that you have to match three balls instead of four, and garbage blocks (character heads) are destroyed by putting one Popoon of the same color near them.

The very rare arcade version tells a story similar to the first game: Hebe finds himself again in the strange world and meets his former friends who need to be beaten, plus other enemies. Every time one of them is defeated, they become a new selectable character, with their own special moves and garbage block patterns. Special moves mess with the opponent in every thinkable way, including forcing the Popoons to drop at high speed, obstructing the visuals and inverting the controls. The final boss is not Unyoon anymore, but a shadow clone/evil twin of Hebe for some reason. 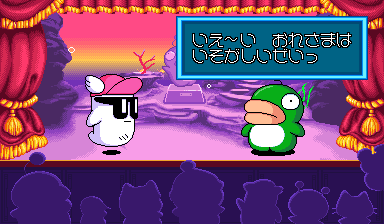 The SNES port removes the most interesting feature, the ability to play as different characters, but adds a 1-vs-1 mode and Elimination Mode, which is structured as a tournament in which up to 8 players (human and CPU-controlled) can take part. For some reason the score is reset to zero every time a new match starts, it doesn’t even keep track of total points.

One of the music tracks is a techno piece suspiciously similar to 2Unlimited’s “Get Ready For This” (even more so in the SNES version). This is the first game where the characters are voiced, and, while it’s funny at first to hear Hebe and O-Chan’s sugary voices, Sukezaemon’s refined speech and Jennifer’s manly grunts, the sound bits are repeated too many times and quickly become annoying.

There is not much more to say, apart from the fact that the title is pretty hard even at lower difficulty levels, the same problem that Puyo Puyo had in solo mode since the computer already knows how to perform big combos. 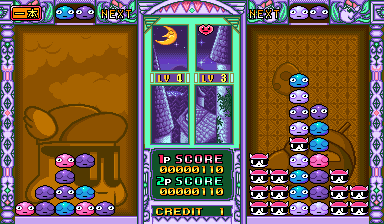