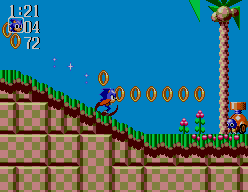 1993 was a big year for Sonic when it came to multimedia ventures, but it was relatively quiet on the games front. While the SEGA CD add-on got the cult classic Sonic CD, the only other games released were spin-offs. One of these was Sonic Chaos: the first original Sonic platformer for 8-bit systems, and the last Sonic platformer to be officially made for the Master System. It was made by Aspect Co. Ltd, who continued to mimic the Mega Drive games in aesthetics and gameplay. While this leads to a unique game mechanic, Sonic Chaos ends up being less exciting, and less frustrating, than before.

In his latest scheme to conquer the world, Dr Robotnik has decided to start going after the Chaos Emeralds, powerful gems hidden within South Island. He’s already gotten the red Emerald, which has caused the others to vanish into another dimension and South Island to start sinking into the sea. Sonic and Tails arrive on the scene, and set out to stop Dr. Robotnik by collecting the other five Emeralds! 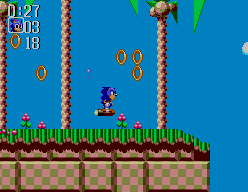 Sonic Chaos is another 2D platformer, but once again, it makes a few changes to the gameplay. Sonic’s gotten a couple of new moves: the Spin Dash from Sonic 2, which allows you to charge up a rolling ball from a standstill, and the Super Peel-Out from Sonic CD, which gives you a quick burst of momentum at the cost of leaving yourself vulnerable. Two extra power-ups are introduced: the Rocket Shoes, which blast Sonic off through the air in a straight line, and the Pogo Springs, which allow you to bounce up to higher platforms.

The levels are brand new, but with only six zones this time around. Starting off in the tropical paradise of Turquoise Hill Zone, you’ll travel through Gigalopolis Zone’s urban nightscape, and then the strange construction site in Sleeping Egg Zone. For the game’s second half, you’ll have to deal with Mecha Green Hill Zone, an industrialized mess in the style of the Bad Future levels from Sonic CD, the half-submerged ruins in Aqua Planet Zone, before facing Robotnik inside the Electric Egg Zone.

You can now play as Tails, who has the ability to fly for a limited time by holding up and pressing jump from a standstill (fun fact: this was the first time you could make Tails fly in any Sonic game), but lacks the Super Peel-Out. He can’t use the Rocket Shoes either, and he lacks another one of Sonic’s traits – the ability to access Special Stages.

The Chaos Emeralds are now hidden within the Special Stages, and the only way to access them is to collect 100 rings in a level. When you do that, you automatically beat the level (a good way to prevent players from repeating the level and getting all the Emeralds at the beginning) and are taken to a platforming challenge of some kind, which you must clear in order to get the Emerald. 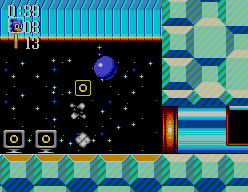 Having to collect 100 rings to reach the Special Stages drastically changes the dynamic of the gameplay. Instead of speeding to the end, you have to explore the levels for ring chains or boxes hiding in secret areas, but you also have to be careful when it comes to enemies or hazards. It’s a welcome change of pace for the series, and one that the level design capitalizes on.

Stages are now designed with a very open mind-set, allowing you to easily go back and forth between various routes and areas in order to find enough rings. The few gimmicks that are introduced, such as roads you must constantly run along or Sonic 2-style corkscrews, force you to use your speed appropriately to grab the rings. There’s all kinds of nooks and crannies cleverly hidden about, teasing you to try weird things to find them without losing your rings.

However, this change comes at a cost, and that’s the pacing and length of the levels themselves. There’s so much emphasis placed on exploration that there’s no space to design lengthy, tightly paced levels that have a sense of progression. If you’re not collecting the rings, perhaps because you have all the Emeralds (which are fairly easy to get, seeing how there’s only five of them) or you’re playing as Tails, you can beat most of the stages within 30 seconds.

This leads to Sonic Chaos being one of the easiest games in the series, and this extends towards the boss battles. While they are competently designed and can be a satisfying challenge, thanks to finally being able to collect rings in their stages, they have obvious weak spots that can be very easily exploited. Seriously, three of the bosses can be beaten by just bouncing on their head and remaining still – even the final boss is victim to this to a degree! 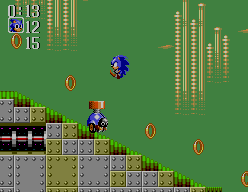 While the gameplay is nowhere near as irritating as Sonic 2 could be, it also lacks the occasional bouts of clever puzzles and challenging platforming. At least there’s a good incentive to replay the game, with the ability to play as two characters and having to collect enough rings to reach the Special Stages, but that’s about it. It’s otherwise just inoffensive, for good and ill.

Sadly, the presentation is on the same level of quality. The graphics are a bit more impressive, with more detailed sprites and improved backgrounds, but the complex visuals result in a framerate that’s prone to slowdown.

Meanwhile, the music, composed by Kojiro Mikusa and Masayuki Nagao, is only decent. The tunes are adequately composed and fit the levels relatively well, but only a couple of them stand out enough to be remembered after more than a minute. Interestingly, the song that plays in Mecha Green Hill is a remix of the song used for Green Hills in Sonic 2’s 8-bit versions, which most will recognize as the basis for the Japanese theme tune for Sonic CD: “Sonic – You Can Do Anything.” 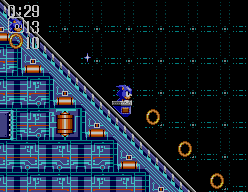 Sonic Chaos is by no means a bad game, but it’s not a particularly great game either. It’s a functional platformer that’s only worth checking out if you’re really into 8-bit Sonic games, or have an interest in a traditional Sonic platformer with a bigger focus on exploration.

A couple of changes were made in the Game Gear port. The title screen, menu, level card, and score tally screens have been completely remade to fit within the smaller resolution. Meanwhile, the music for Turquoise Hill, Sleeping Egg and Aqua Planet has been rearranged to have a fuller mix, with more interesting melodies and other minor changes. Meanwhile, Gigalopolis (now renamed to Gigapolis) has been given a brand new song, which feels more appropriate to the setting and stands out. Most amusingly, a correction was made to Tails’ real name in the credits, which was originally misspelt as “Miles Power” on the Master System.

Bosses have been tweaked to be less exploitable, but take less hits to defeat. The latter change seems to have been done to compensate for the removal of most of the rings in their stages (some of which have been slightly tweaked in terms of layout), which otherwise makes them more difficult. However, the biggest problem is that the game’s levels have not been readjusted to fit within the smaller field of view, meaning that hazards and enemies frequently come out of nowhere and many sections force you to take leaps of faith.

Oddly enough, the Japanese Game Gear version makes a few more changes, such as a different font for the level cards, and a combination of Master System, Game Gear, and slightly tweaked layouts of each version for the third acts in most of the zones. But in terms of gameplay, the Master System version of Sonic Chaos is the best one to play.

A fan remake is currently being developed by a team led by YouTuber A+Start (known for his Son of a Glitch and Low Poly series of videos). Developed with the custom made Crimson Engine, the remake is a dramatic re-imagination inspired by the 16-bit games, but particularly Sonic Mania both stylistically and mechanically. At the time of writing, it’s been in the making for at least a year and a demo was released for the SAGE (Sonic Amateur Games Expo) 2018.

A link to download the SAGE 2018 demo of the fan remake – https://sonicfangameshq.com/forums/showcase/sonic-chaos-turquoise-hill-demo.228/