After a relative lull in games, Sonic returned to the gaming scene in a big way in 1994. The main series returned to the Mega Drive with Sonic the Hedgehog 3 and Sonic & Knuckles, while SEGA’s 8-bit systems got THREE games. Two of them were spin-offs, but the third was another original platformer that turned out to be pretty notable.

Sonic the Hedgehog: Triple Trouble was the first Sonic platformer developed exclusively for the Game Gear, and it not only featured Knuckles’ 8-bit debut, but it introduced the relatively obscure treasure hunter Fang the Sniper (known in the west as “Nack the Weasel”). At first glance, it seems like a direct sequel to Sonic Chaos, even going as far as to be called Sonic & Tails 2 in Japan, but it’s a big improvement over its predecessor. In fact, it’s one of the best Sonic games on the Game Gear.

The story is much the same as Sonic Chaos in its basic concept: Dr Robotnik has gotten one of the Chaos Emeralds, and it’s up to Sonic & Tails to collect the rest. However, a couple of new players are introduced: Knuckles the Echidna, who has been tricked by Robotnik into believing that Sonic & Tails are up to no good, and Nack the Weasel, a treasure hunter who lives in the Special Stage and seeks the Chaos Emeralds to sell them off for a big price. Things have just gotten complicated!

Sonic Triple Trouble is another 2D platformer based on the series’ standard gameplay, with a set of completely original levels. You start off in Great Turquoise Zone, yet another tropical paradise, before you’re whisked away to the enormous railway at Sunset Park Zone, and then have to find your way through the sprawling rainforest known as Meta Jungrila Zone.

For the game’s second half, you’ll be dashing down the snowy hilltops of Robotnik Winter Zone, trudging through the aquatic mazes in Tidal Plant Zone, before taking on Robotnik deep within the industrial bowels of his Atomic Destroyer Zone. Once again, you can play as either Sonic or Tails, but a few things are different.

Sonic has a new power-up: a snowboard that allows him to cruise down the snowy mountains of Robotnik Winter. Not wanting to be outdone, Tails gets one too: the High Speed Helitail, which functions in the same way as Sonic’s Rocket Shoes. Tails can also use the Sea Fox, a submarine that allows him to more easily explore the depths of Tidal Plant. Both characters have gained the ability to curl into a ball when launched from a spring or recovering from a hit, which makes the gameplay a bit more dynamic than before.

Sonic and now Tails can access the Special Stages, which are a mix of platforming challenges where you have reach the end before time runs out and psuedo-3D Tornado challenges where you have to collect a certain amount of rings. The latter are pretty terrible, since you move very slowly and the lack of a detailed background makes it difficult to tell where you’re meant to be to collect the rings.

How you access the Special Stages has also been changed. Hidden within each level is an Emerald Monitor. If you hit the monitor while holding over 50 rings, a sparkling trail appears above you, and you jump into the trail to get to the Special Stages. This change encourages a different kind of exploration from Sonic Chaos; instead of just collecting a certain amount of rings, you also have to explore the levels more intently in order to find the Special Stages.

This can seem imposing at first, considering how you’d typically lose all your rings when you get hit, but the health system has been tweaked to be more forgiving. Now, you only lose 30 rings if you get hit by an enemy, or 50 rings if you’re hit by spikes (which are thankfully rare).

This change is likely responsible in part for the drastically improved level design. Instead of creating big open stages for the player to explore at the cost of any sense of rhythm or flow, the levels have been tightened to allow for more exciting stages that introduce and develop ideas, while still giving plenty of room for exploration.

Stage gimmicks like the carts in Sunset Park or the water bubbles in Tidal Plant (returning from Sonic 2‘s 8-bit counterpart) add variety without being obnoxious interruptions. Shortcuts to previous areas and secret passages leading to power-ups or item boxes are hidden throughout the levels. Stage designs gradually increase in challenge and trick the player, but in a way that feels fair and never cheap. In short, it’s the closest that Aspect have ever come to emulating the structure and progression of the Mega Drive games, and it’s easy to see why they kept trying to do so when the end result is this good.

Bosses are fairly easy, but they have a greater variety of strategies than before and do a good job at testing the player’s knowledge of the game’s mechanics. With two playable characters and six Chaos Emeralds to get, there’s enough incentive to keep coming back and replaying the game.

However, it isn’t perfect. When you return from beating a Special Stage, you lose all of your rings, which makes it easy for you to get killed while finding your way back (thankfully, the frustration is reduced by the return of checkpoint monitors). Also, considering how big the game is, it’s odd that there isn’t a password system to get back to where you were. While previous games didn’t have one either, it’s only an issue here due how much bigger it is.

The graphics are a bit of a mixed big. On the one hand, there is a much better use of art direction to create distinct moods, with the color palettes in levels being unique enough that they’re almost comparable to those seen in Sonic CD. However, the push for even more detailed characters and level tiles means that the framerate slows down much more noticeably than before.

The music, composed by Yayoi Wachi (as well as Kojiro Mikusa, who made an unused Sonic Chaos music track that would be remixed to create the fan-favorite theme for Sunset Park’s third act), is a remarkable improvement over previous soundtracks. The tracks are now composed to reflect the level they’re in (e.g. the xylophone-like backings in Meta Junglira Zone, the mechanical percussion of Atomic Destroyer), there’s a stronger use of melodies to create unique moods, and an overall more memorable, compelling sound that makes for one of the best Sonic soundtracks on the system.

Sonic Triple Trouble carries a feeling of Aspect finally having come into their own and figuring out the best way to recreate Sonic‘s 16-bit adventures on less powerful hardware, and is absolutely worth checking out if you’re a fan of the series. 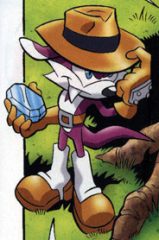 Sonic Triple Trouble would be the first of the 8-bit titles to be adapted in the Archie Sonic the Hedgehog comics, in the form of a 48-page special issue named after it. Taking place after issue #27, the game’s plot is retold in the first of three stories, though expanded upon to develop the universe of the comic. Nack the Weasel was introduced in this story, and would go on to become a recurring villain over the course of the comic’s run.

Given the game’s ability to closely emulate the Mega Drive games, it makes sense that someone would eventually take this to its logical conclusion with a 16-bit styled fan game. Developed over the course of five years by a large team led by composer/programmer Noah Copeland (which includes regular HG101 artist Dee Liteyears), Sonic Triple Trouble 16-Bit expands on the original game with entirely new level designs, completely redone Special Stages where you face against Nack in psuedo-3D stages, and the ability to swap between Sonic and Tails at any time.

In addition to this, you also get the elemental shields from Sonic 3 & Knuckles, the Drop Dash from Sonic Mania, unlockable characters with unique abilities that can be experienced in Free Play mode, and a competition mode with races & fights that can be played on your own or against another player. There’s even a story mode for this competition mode, with unique cutscenes for each of the characters! 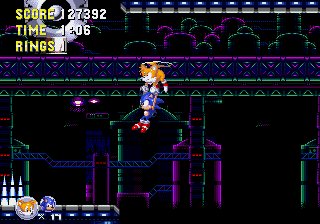 It’s a feature-packed game for sure, but one that earns it by having the core game be so solid. The level design displays a good understanding of pacing, with stages shifting naturally between slower platforming and high-speed thrills. The power-ups from the original are largely kept to single stages, utilizing them as unique gimmicks such as flying through the air on Rocket Shoes or navigating an entire level with the Sea Fox.

Presentationally, it’s a treat. The graphics keep the original colours while embellishing them with greater detail and suggesting a sense of progression through new backgrounds and changing colour palettes for the second act. Meanwhile, the music rearranges the original compositions with influences from the Mega Drive games (e.g. Robotnik Winter taking cues from Ice Cap Zone), resulting in a soundtrack that mixes the best qualities of both. It’s also worth praising the game’s commitment to presenting the story mode as a continuous experience, not using any loading screens and seamlessly transitioning between every stage.

Triple Trouble 16-Bit isn’t a superlative remake that overwrites what the original was trying to do and accomplished. Both are equally valid works worth checking out if you want to see people successfully make a Sonic game styled after the Mega Drive classics, whether on less powerful hardware or as a pure passion project.