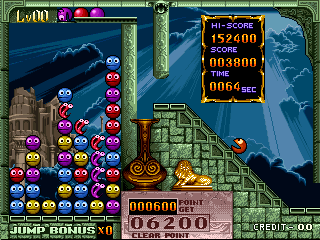 Atlus was primarily a console developer, though they dabbled with some arcade releases. After the shoot-em-up BlaZeon and the fighting game Power Instinct, they put out a puzzle game (undoubtedly inspired by the success of Puyo Puyo) with the fairly humorous title Oh My God! 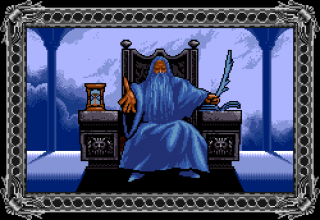 Oh My God! is a drop style puzzle game, where you control chains of falling ball creatures. You can move the chains up down, and side to side, but you can’t make them go through where another ball is, making it kind of like the classic game Snake. The goal is to line three or more balls of the same color in a row, making the balls disappear. Rows can be horizontal, vertical, or diagonal. Not all rows will be apparent while maneuvering your chain of balls, so if you have a row lined up, you can see the ball creatures making terrified faces below. If you take too long, the chain will fall faster and eventually lock in place. You can also hit a button to instantly drop the chain where it is, which is extremely useful.

Things get trickier, though. On the side of the screen, you can see little ball creatures slowly crawling up a slope and into a huge urn. Your chains come from that urn, and once that ball falls in, your chains will be one ball longer. This makes maneuvering chains much more complicated. There is an advantage to this, though. If your chain has three balls of the same color inside it, you can line them up while they’re still in the air. The game always tells you when this happens and will tell you exactly the right way to position your chain in the air. If you can do this, your remaining balls will fall and turn all balls in a vertical row to that color, eliminating it, and possibly some others that were bordering it. Your chain count will also reset back to three. You can also level up by clearing a certain number of balls, which will also reset your chains back down to three. Multipliers are also awarded by having balls fall into more balls and make subsequent three in a row lines. 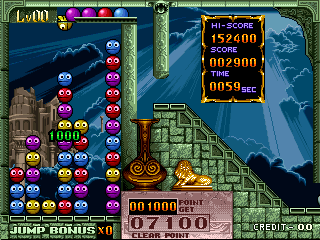 If your balls end up filling the screen so much that you cannot drop them, the game ends, and you hear a voice clip of an audience shouting “Oh My God!” while any ball creatures climbing into the urn smile and put on sunglasses. This partially ties into the story, which involves challenging God. How this involves gameplay is never explained, though the resulting backgrounds are pretty cool. Backgrounds change every 3 levels, all of them having vague biblical themes such as a temple with glowing clouds above it, an idol to the ball monsters, or Earth being destroyed by huge green pillars. Oh My God! never takes any of this seriously, always having a lighthearted feel to it.

2-player mode changes the story and gameplay a little. Instead of challenging God, you’re trying to amuse him by challenging another player. You also dump extra balls on your opponent for scoring combos, similar to Tetris Attack or Super Puzzle Fighter II. The extra balls can fill up your opponent’s screen, but it could provide him with an advantage if they really know how to use their chains right, making gameplay very back and forth. It’s very satisfying to have your friend think he’s winning because your screen is nearly full, until you unload a huge combo on him and win from out of nowhere. 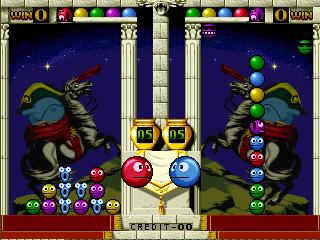 Even though it’s not hugely different from other similar games, Oh My God! can deliver a more than enjoyable experience and proves to be one of the better creative games of its type.

Special thanks to Ryusui for helping translate the story.