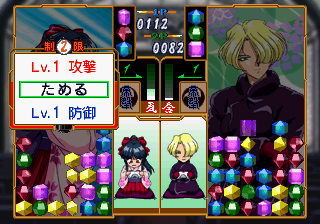 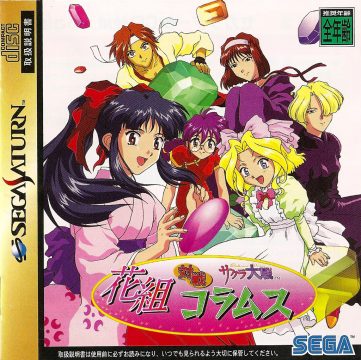 Another apparent cash-grab, this came just a month and a half after the fan disc, in March of 1997 – but the surprise is that this is a pretty well-put-together product. On the surface, it seems to just be the classic falling-blocks puzzle game Columns with a Sakura Taisen theme. (The second “Taisen” in the title has different kanji, meaning “competition” rather than “war”.) Of course, it includes 1-player and 2-player ordinary Columns modes. But then there’s a story mode, in which you choose a heroine and play through normal Sakura Taisen adventure scenes, complete with LIPS dialogues; Columns matches are interspersed with the story. There’s also a “Cinderella mode”, in which you choose a heroine and she competes with the rest of the cast for who gets to play the title role in the Imperial Revue’s performance of Cinderella – as you beat the other heroines, their unglamorous role (such as “tree”) is decided.

There is a fair bit of new material in this game: chibi versions of the characters with controllers, reacting to the match; expressive portraits swapping out behind the Columns gems; dedicated illustrations for the story scenes; and so on. Ultimately, a surprisingly rewarding side-disc. 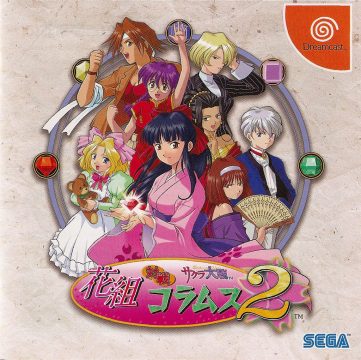 Released in January 2000, this was the first Sakura Taisen title for Dreamcast. It’s basically more of what we saw in Hanagumi Taisen Columns, with a few key differences. First, of course, is that it takes advantage of the new Dreamcast hardware for higher-fidelity graphics and fancier animation. Second, it includes the new characters from Sakura Taisen 2. Third, it offers online play using the Dreamcast modem (though the servers have long been turned off, of course). Fourth, and most importantly, it seems to be the first game to use character art by someone other than Kousuke Fujishima and Hidenori Matsubara. Because of the consistency in presenting these characters in every other context, it really shows. There’s something wrong about seeing the characters you’ve spent so many dozens (or hundreds) of hours with, drawn by someone kinda, but not quite, like the usual artists.

Otherwise, this is quite similar to the first Hanagumi Taisen Columns. There is a main story mode, a mode in which the heroines compete for a lead role, and ordinary one- and two-player modes.