Sega’s 32X shall always remain one of the company’s lowest points in history. Many words have been said on what exactly happened with its launch. One of its greatest flaws, however, was a somewhat mediocre selection of games on offer. Not even Sega’s flagship series came through the add-on unscathed, as shown by the release of this particular title. Chaotix is a massive oddball in the series, and unfortunately, once you get past its general sense of weirdness, there’s not much reason to recommend playing it. It’s far from the worst game in the series, to be sure, but the game’s convoluted history, including its Genesis prototype “Sonic Crackers”, lead to a jumbled mess of a game. It’s honestly somewhat of a miracle it ever came out, but one can assume Sega must have invested far too much into it to simply scrap it. The strangeness begins with the game’s plot, or what’s presented in the manuals for the Western and Japanese versions. The Western plot says that Knuckles is now guarding Carnival Island, a massive amusement park. Robotnik wants the “Power Emerald” that keeps the park running, and he’s also captured Knuckles’ friends that make up the new cast of characters. The Japanese version, however, has an entirely different plot, in which Eggman creates a carnival fortress on Angel Island to use the power of an ancient artifact called the “Chaos Ring”. Neither plot really factors into the actual game, although the “Chaos Rings” do indeed replace the usual emeralds.

Despite the top billing the Western title gives him, Knuckles only gets about as much screentime as the rest of the new characters this particular game introduces. Mighty the Armadillo is an obvious stand-in for Sonic, to the point where his sprites are lightly edited from the hedgehog’s previous games. Vector the Crocodile is probably the most interesting of the lot, with a pair of headphones he’s constantly jamming with. Espio the Chameleon has a pretty fun ability that lets his feet stick to walls and ceilings, letting him run across them freely. Charmy the Bee is the smallest of the cast, but he can fly. Not just in the limited form Tails possesses, but specifically the ability to repeatedly dash in any direction as often as you want, with no limits placed upon it in the slightest. Unsurprisingly, this makes him the superior choice for getting through the game as quickly as possible. The attempt made to innovate on the co-op gameplay introduced in Sonic 2 is where the game starts to break down. After you choose your primary character, you’ll be made to choose a partner character to bring along with you. This engages a strange, UFO catcher-esque minigame, in which you need to use a crane to pick up one of the various characters. Different characters are constantly popping in and out, however, and if you’re unlucky, you might end up picking up one of Eggman’s reformed badniks, Heavy & Bomb. Heavy is as slow and clunky as his name suggests, which makes him a pain to use with the game’s central mechanic. Bomb, on the other hand, explodes when he takes damage, which can more often than not end up harming you, as well. If you end up with a character you don’t like, your only option is to either finish a level, die, or reset the game, where you can try to select a new, hopefully better partner.

Instead of your partner following you around freely, each of the two characters holds a ring, forming a rubber band-esque chain. You can order your AI partner to hold their position (noted by them exclaiming “HOLD!”), useful for having them stand on switches, or for stretching the rubber band’s length far enough that its tension snaps you back in the opposite direction when you stop running, providing an extra boost of speed. You can also grab and toss your partner around, either to attack enemies, or to reach higher ground that would otherwise be out of reach. It sounds good in theory, but the fact that the game has to introduce a tutorial just to explain this particular gimmick should be taken as a rather large warning sign. Indeed, this usually leads to all kinds of frustration. Your partner might get tugged in another direction, which often means you’ll end up losing control entirely as the other character tosses you around in every direction. Other times, he might get caught underneath a platform, which means you’ll be stuck in place until you spend ten rings to recall him back to your position. It gets even worse if you’re unlucky enough to have Heavy as your partner, as it more or less feels like trying to navigate while strapped to a literal ball and chain. In typical Sonic fashion, you can also have a second player control your partner, but this doesn’t make trying to coordinate your movements in any kind of fashion easier than it would be with the AI.

Even despite this added handicap, this entry may well be one of the easiest games in the franchise for several reasons. Should you ever take a hit without rings, you’ll only lose your partner for a few brief seconds, after which he’ll automatically return to you. It’s only if you take another hit without your partner that you actually die. You’ll also die if you call your partner to you so many times that you hit negative two hundred rings, which is so unlikely to ever happen that you’ll have to actually force it to happen. With no bottomless pits or any real hazards to speak of, death would never be any sort of danger even if the game didn’t offer you unlimited lives. It doesn’t help that the levels are usually pretty short, and a lot of them can have massive chunks of them bypassed by throwing your partner in just the right place. The lack of difficulty could be forgiven if the levels were up to the same standard as your usual Sonic game, but even that fails. The zone you’ll enter is randomly selected from a roulette each time you enter the hub, with each zone containing five acts each. The game likely selects your level randomly because it doesn’t take long to figure out that each act of each zone is more or less identical. The layouts might differ ever so slightly, but it becomes increasingly hard to differentiate the further you go. All the levels are also missing the usual series staples like water, loops, or bottomless pits. There’s the occasional gimmick, like having to press buttons that will cause boats to rise up and give you an upwards path, but that’s about as interesting as they ever get.

The game is full of these sorts of half-baked ideas, few of which ever really pan out. One new powerup monitor makes the character that breaks it grow very large. While it makes the affected character invincible, it seems like it’s only there to showcase the 32X’s scaling abilities. The game also has a day/night cycle that cycles out every couple of acts. Supposedly, this actually quite a number of things, like minor changes in level layout, which enemies appear in an act, and the difficulty of bosses. Unfortunately, it’s rather hard to actually notice in practice, given how interchangeable each level truly is, and the roulette making it difficult to intentionally get a specific level so as to confirm such changes. Probably the best new thing to come out of Chaotix is its polygonal bonus stage, which is where the game really makes the most of the 32X hardware. Your character navigates a tube-like 3D dimensional course where gravity is determined by the orientation of the surface they’re currently running on, with the objective being to grab enough blue spheres before the stage loops. While you can loop around as many times as you want before you hit the quota, the big constraint here is that your ring gauge is counting down every second, ending the stage when it hits zero. You can offset this by going in with a large ring count or grabbing some of the rings sprinkled around the stage, but there are naturally plenty of spike balls and saw blades to try and hasten your ring loss, springs and bumpers to waste time bouncing off, and gaps in and around the track that immediately end the stage if you fall into them.

Finishing one of these stages rewards you with a “Chaos Ring”, which have no real benefit aside from giving you the best ending. Miss even one of them, and you’ll be treated to the sight of the final boss, a monstrous giant form of Metal Sonic, hovering over a burning city. It’s rather grim, but the better ending is so short and anti-climactic that the former might actually be preferable. Either way, even with the ability to save your game, there’s so much filler to get through to reach any ending that it’s probably not worth the effort. The graphics tend to vary rather strongly in terms of quality. Some of the new characters, like Vector and Espio look great. Knuckles, however has a new sprite with an overly pink shade an odd looking face that looks more than a little off. Likewise, some of the new zones go from looking somewhat nice, if a little plain, to using the hardware’s color pallete so hard that they come off as more than a little garish. It doesn’t help that the game uses its scaling feature as often as it can possibly get away with, which ends up more often than not looking a little silly. As typical for even of the worst Sonic games, however, the music is usually very good. The theme for the game’s first zone, “Door into Summer”, even received an excellent orchestral remix in Sonic Generations.

Chaotix is worth looking at as a novelty, but it isn’t very good for much else beyond that. It’s very much a Sonic game, but it’s been so distorted that it’s just not particularly enjoyable to play. It’s more or less been forgotten even by Sega, and it’s one of the few classic Sonic games that’s never received a rerelease on an official compilation. While Vector, Charmy, and Espio would go on to make future appearances (Mighty being left behind, perhaps for the blatant resemblance to Sonic noted earlier), their debut has been more or less buried. Given how much of a mess development was, it’s not particularly surprising the game ended up this way, but it’s still a shame to see it happen. 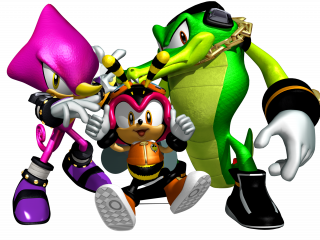 The modern redesigns for Espio, Charmy, and Vector, as seen in Sonic Heroes