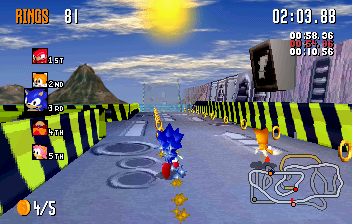 Despite being at the center of the Genesis’ success and popular to the point of ubiquity, Sonic the Hedgehog was comparatively quiet during the Saturn’s short life. Only three games were released, and two of those were ports of his 16-bit adventures (Sonic 3D Blast and the Sonic Jam compilation). The third game was Sonic R, an original racing game conceived by Sonic Team and developed by Traveller’s Tales in much the same way as 3D Blast. While somewhat clunky and very short, it’s also a technically impressive, unique racer quite unlike anything else in the genre.

This can first be seen in how the majority of the racers aren’t in vehicles, but instead run around on foot and can jump – usually with an extra boost like double jumping or gliding. These help the characters navigate the tracks, since each one has numerous routes and shortcuts that can be taken depending on who you’re playing as. While most characters have extra maneuverability, Amy and Robotnik can drive over water without sinking and can boost or fire a missile respectively to even the odds. 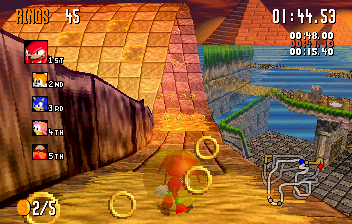 Dotted around the level are item panels, which can give you a temporary speed boost, a water shield to run across water, or a lightning shield to attract rings. Yes, there are plenty of rings to collect, but instead of counting towards your health, they’re used to either give you a quick speed boost on booster pads or open up gates to access shortcuts and secret areas.

In the “Grand Prix” mode, these areas will contain Chaos Emeralds and occasionally Sonic Tokens. There are five Sonic Tokens in each track, and if you collect all five and come in either first, second or third place, you’ll be challenged to a race against one of Robotnik’s robotic racers (mainly clones of the main cast with different attributes, including the memetically spooky Tails Doll). If you win, that racer will become playable. As for the Chaos Emeralds, you can only keep them if you come in first place, and getting all seven will unlock a special character…

These collectibles encourage replaying the tracks to not only unlock more content, but to get better at the game by learning the controls and layouts to grab the collectibles and win the race. It’s a very good idea, especially for incentivizing players to understand the initially unorthodox controls. Despite looking like a 3D platformer and being able to move the character by pushing forward, it’s better to use the acceleration button to move forward while using the control pad for steering left and right, like a standard racing game. You can also make sharp turns with the shoulder buttons, and those should be used alongside steering for corners and the like. 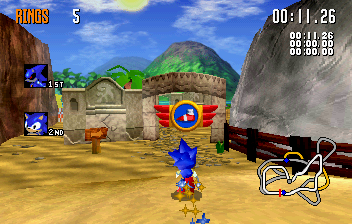 That isn’t to say the controls are perfect. There’s no way to reverse, forcing you to stop and turn very slowly to start moving again – something that becomes very annoying when the collectibles sometimes force you to do this. Characters who can’t jump often become a liability, as they can’t access certain areas and are unable to grab some of the collectibles, making them outright useless on occasion.

However, the controls can be adjusted to despite their reputation, and are worth the effort for a unique racer. While characters are often somewhat loose in drifting, the majority of them are enjoyable to control and offer enough variations in stats to encourage different playstyles. The various mechanics complement each other well, leading to a game that’s easy to enjoy on the surface while containing plenty of depth.

What ties it all together are the track layouts, which are dense with routes and shortcuts in a way few racing games are. More than anything, these work alongside the mechanics to get you to become better by replaying courses, understanding the mechanics and trying out new tricks to set a new record. In a way, getting the fastest time is the real goal – and something that would explain the AI, which is usually indifferent and just has characters running their own paths. This would be a problem in other racers, but it works here since they serve as a walking time limit to encourage you learn the game. 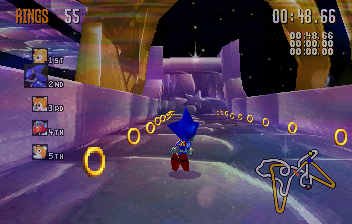 By embodying a philosophy of pure skill mastery, Sonic R not only stands out from the pack, but actually carries the legacy of the Genesis classics into a new genre. (That connection is further strengthened by the fact that the track layouts were directed by Hirokazu Yasuhara, the man responsible for the level designs of those games.) However, it’s also a harder sell than other racers due to its very short length.

There’s only five tracks available; a pitifully small number compared to something like Diddy Kong Racing‘s 20. There are a handful of extra modes to try out: “Time Attack” for both normal and reversed tracks, a “Balloon” mode where you find five balloons scattered around the track as quickly as you can, and a “Tag” mode where you try to tag the other four racers. But while they’re fun diversions that further encourage you to become more familiar with the track layouts, they don’t offer much else. The options for two-player are even more restrictive, only allowing you to race head-to-head in normal tracks and grabbing five balloons.

The small track count came about due to the game’s very short development time, which began in February 1997 (retooled from an F1 game Traveller’s Tales was making for the Saturn) for release in November that same year – giving the team nine months at most to put it together. As a result, it’s perhaps a bit too short despite its enjoyable gameplay, but that’s somewhat made up for by some excellent presentation. 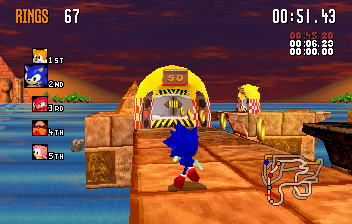 While the character models are very basic, the graphics are undeniably impressive given the Saturn’s difficulty in rendering open 3D environments. A clever technique called ‘12 layer transparency’ was used to fade distant environments in and out, which helped to render the game at a consistent 30 frames per second. It’s even more impressive that the game manages to retain that framerate in 2-Player mode, considering the game effectively has to render everything twice (albeit with a smaller draw distance). Combine this with some nice lighting effects on the characters and the environments, and you’ve got one of the Saturn’s most technically stellar games.

However, the most memorable thing about Sonic R is the soundtrack by Richard Jacques, who previously handled the excellent music for 3D Blast‘s Saturn port. Taking cues from that game’s latter levels, Jacques gives each course a 90’s Europop song full of electronic instrumentation, catchy beats, and vocals provided by singer TJ Davis. While an unusual and incredibly cheesy choice, it’s absolutely vindicated by how every song is arranged and performed with such conviction. If you’re willing to roll with it, the soundtrack is a delight to race (and sing along) to, and one that the series has frequently re-used in spin-offs and other racing games since. 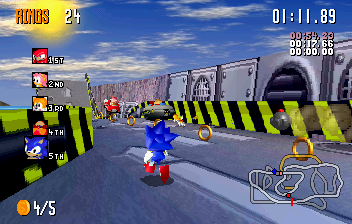 Like many Saturn-era games, Sonic R was ported to Windows in 1998, with numerous tweaks to the presentation. In terms of visuals, the character models were given an increase in detail, the draw distance was greatly extended, and a variety of weather conditions and times of day were introduced to make replaying the tracks more varied. That said, the audio quality suffers somewhat with the sounds being much louder than the music at default and the sound mix randomly changing between courses.

Nothing substantial has been added to the core game, but with customizable controls and network play to race against others online, this is the best version you can experience. However, it’s also very difficult to get running on modern systems. While a later re-release in 2004 is more compatible due to being made for Windows XP, network play was removed and the lighting engine was broken, which left levels looking much blander.

Thankfully, there’s a remedy to this in the form of the fan-made Sonic R Updater, which fixes various technical problems, adds numerous improvements such as widescreen support and includes a Mod Manager with mods such as one that restores the lighting engine. The 2004 version was also featured in the Sonic Gems Collection compilation, making it the easiest way to play the game – it even includes four-player multiplayer as a nice bonus! 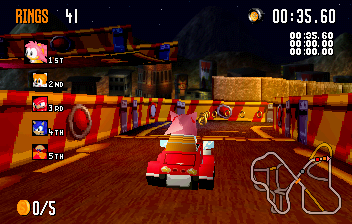 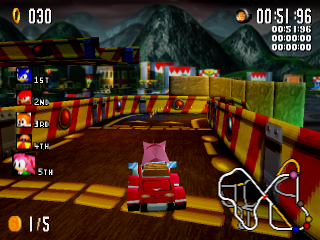 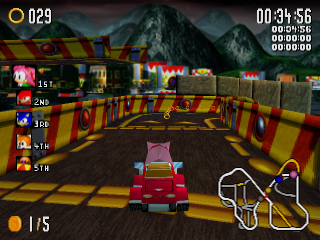 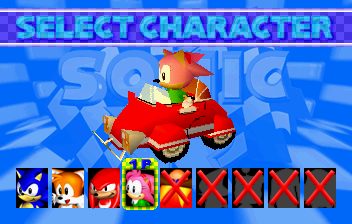 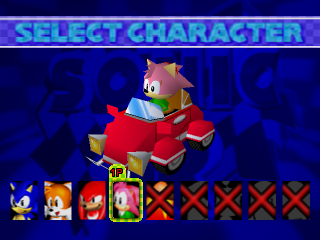 The Sonic R Updater for the PC port – https://gamebanana.com/tools/6325

A video tutorial on installing Sonic R on PC and using the Sonic R Updater, along with some extra information – https://www.youtube.com/watch?v=ChTn2S2DSS4