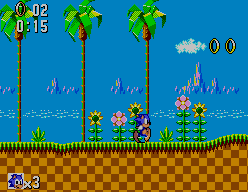 In the early 1990s, Sonic the Hedgehog was everywhere. A series of hugely popular games for the Mega Drive catapulted the character into the limelight, with two concurrently airing animated shows, an American comic AND a British comic, board games, children’s novels, and even a series of otherwise unrelated techno-dance albums promoted with his brand being among the many things that demonstrated how ubiquitous the character had become.

This was especially clear if you owned Sega’s 8-bit systems, the Master System and the Game Gear, where the Blue Blur had 12 games released from 1991 to 1996. These games run the gamut from handheld ports to strange spinoffs to original titles, featuring both underrated gems and justifiably forgotten mishaps; but all of them are worth discussing. 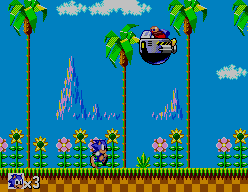 The first of these games was a port of the original Sonic the Hedgehog, released for the Master System and Game Gear a few months after the Mega Drive version. It was the first game developed by Ancient, a studio founded by composer Yuzo Koshiro that went onto to create acclaimed Mega Drive games like Streets of Rage 2 and Beyond Oasis. Sonic 1‘s 8-bit outing might seem like an inferior version of its 16-bit counterpart at first glance, but is actually a great game that knows its limitations and uses them to make a different, but still very enjoyable kind of platformer.

The plot and general gameplay are pretty much the same as on the Mega Drive. The vile scientist Dr Robotnik is kidnapping animals and putting them into his machines to take over the world, and it’s up to cocky speedster Sonic the Hedgehog to stop him. It’s a 2D platformer where your goal is to get to the end of the level, running, jumping, collecting rings to keep you alive, smashing item boxes to get bonuses like shields and checkpoints, and rolling into enemies along the way.

However, there are a few changes in this version, some caused by the limitations of the Master System, and others made in general. For example, the acts in each zone are structured differently: the first two acts are your standard platforming levels, while the third act is a brief platforming challenge before you take on Robotnik in one of his machines (this structure stays consistent throughout all the 8-bit Sonic platformers). Another change is that you now collect the six Chaos Emeralds within the levels, instead of in the Special Stages. These are accessed when you beat the level with over 50 rings, and are simply places to get extra lives and continues by getting as many rings as possible. The controls are a bit different too, being an approximation of those seen on the Mega Drive. 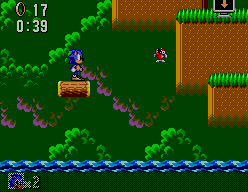 The biggest changes can be seen in the stages, which feature brand new levels. While Green Hill, Labyrinth, and Scrap Brain Zones reappear (with the ROM file containing an unused music track and sprites that imply Marble Zone was planned to feature as well), the rest of the zones are replaced. In between Green Hill and Labyrinth are Bridge Zone, where you travel along winding bridges over a rushing river, and Jungle Zone, where you run up vines and use logs flowing down waterfalls to make your way through. After beating Scrap Brain, you climb up a thunderstorm to get to Robotnik’s airship in the Final Zone.

The level design is considerably less fantastical. The loop-de-loops, s-tunnels, half-pipes, and other surreal designs from the Mega Drive original are absent. In fact, the pinball physics are only put to any kind of use in the Special Stages, perhaps due to the lack of enemies and bottomless pits that would otherwise make them frustrating in a regular level. What this results in is a game that’s much less of a speedy spectacle, but that isn’t really a bad thing.

This is mainly because the level designs instead focus more towards platforming, with some levels even utilizing the more obscure momentum aspects of Sonic’s movement (e.g. the vines in Jungle Zone and Green Hill Zone’s namesakes). In addition, the game’s relatively slow pace allows you to take your time and try to understand the game in order to get through the six zones on offer, which will be quite important since the levels tend to change themselves frequently in structure and focus.

The first act in a zone will introduce new obstacles (falling platforms in Bridge Zone, underwater sections in Labyrinth Zone), while the second act changes things up by focusing on one aspect of those obstacles to make a new challenge for the player (auto-scrolling levels that test your timing and patience, long stretches of water to keep you moving). In fact, that’s the word to best describe this game: a challenge. The changing level designs challenge you to constantly re-adjust to new settings, the platform-centric nature of the game challenges those comfortable with a super-speedy Sonic to think differently, and the bosses will definitely challenge you by forcing you to beat them without any rings in their levels. 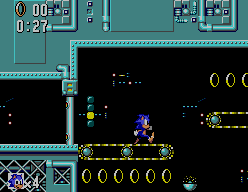 Obviously, this desire to challenge the player doesn’t always work. A problematic change is that when you get hit while holding rings, you lose one giant ring representing them all. While this is understandably done to prevent dozens of rings flying out and bringing the framerate to a halt, the problem is that you can’t get that ring back, leaving you wide open to an easy kill.

Without a way to recover from an unexpected attack or ill-timed jump, having to fight the bosses over and over again when you’re one hit away from death makes them come off as cheap and annoying. Some levels get a bit too devious, such as Jungle Zone Act 2, which has a screen that scrolls upward as you ascend the waterfall – if you fall down, even to where you know there are safe areas, you’ll be killed on the bottom of the screen.

The worst part of the game by far is Labyrinth Zone. While it’s impressive that the game tries to mimic the change in momentum and controls when you go underwater, you become ridiculously slow, with no way to properly jump over obstacles without a good run up. This wouldn’t be so bad, if it weren’t for the fact that the level designs become far too cruel to work with these controls, and how the dreaded underwater timer shows up very quickly and forces you to rush through things before you drown. 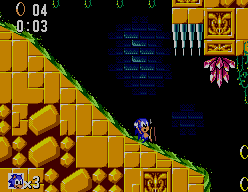 Thankfully, the rest of the game manages to make up for that. The controls might be different, but they’re still very responsive, ensuring that you hit your mark, stop on a dime, and don’t suffer from an accidental death. In fact, it’s admirable how the game manages to recreate Sonic’s momentum and pinball physics in a way that is not only still fun to play, but is considerably better than most future attempts at remaking those controls down the line (Sonic 4, anyone?).

The level designs provide a nice challenge and do a good job at keeping things varied, which makes you curious to see what’s going to appear next. Some of the bosses, despite that one-hit-point problem, manage to play into the momentum system pretty well and force you to think about how Sonic moves and jumps in order to dodge their attacks. Scrap Brain Zone and Final Zone are the highlights of the game, where the levels are even more complex, the traps and enemies even more deadly, and the bosses even more exciting to fight.

It’s also fairly short, lasting a little over an hour. That might sound like a criticism, but it means that the game presents its mechanics, levels, bosses, etc., and uses them to their fullest potential without outstaying its welcome. Plus, it leaves the game open to being replayed without having to commit to a long experience.

This is all backed up by some great presentation. The visuals may be very simple, but are bolstered by adorable character sprites that are easy to see, beautifully minimalist backgrounds, and a very smooth framerate that ensures the game always plays well.

The soundtrack is excellent, with a combination of 8-bit recreations of Masato Nakamura’s tracks and original pieces composed by Yuzo Koshiro (who did the music for most of Ancient’s games) that manage to be just as good thanks to enjoyably catchy melodies, a variety of musical styles, and a great use of the Master System’s PSG sound chip to provide a distinct sound.

All in all, the 8-bit version of Sonic the Hedgehog is a very good game that is worth checking out, especially if you’re a fan of the series who prefers a slower-paced, platforming driven experience.

The Game Gear port is mostly identical to the Master System version, since both systems have very similar hardware, but a couple of changes are made. The game has been adapted to fit within the reduced screen resolution, with Sonic being given a brand new set of smaller sprites (this is the only time sprite changes would be made in the handheld conversions). This also led to the bosses being placed lower down to fit within the smaller field of view. Because of that, you’re able to attack them much more quickly, making most of them a joke (except for Labyrinth Zone’s boss, which is made trickier since you don’t have as much room to dodge Robotnik’s missiles).

Various minor tweaks are made to the level design, most of which serve to make the game a little easier and less frustrating. The biggest tweaks are in Jungle Zone Act 2, which no longer kills you for falling down, and Labyrinth Zone, where the layouts were radically changed to make for a more enjoyable change of pace. These tweaks result in the Game Gear port being the best version of the game. It’s also the most easily accessible version, having been re-released far more often than its Master System counterpart over the years.

While the SMS version of Sonic the Hedgehog is fairly common in PAL territories, the North American version was released only in extremely limited quantities. The ROM and even the packaging itself is identical, the only thing that sets it apart is a unique sticker over the UPC code on the back. That little sticker can take a $10 game and can elevate it to nearly $1,000.