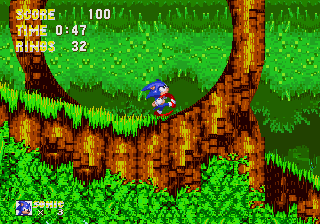 As expected, Sonic the Hedgehog 2 was a massive success for the 1992 holiday season. A sequel was started almost immediately by most of the same team, though it wouldn’t be ready for the 1993 shopping season. (That task instead fell to Sonic CD, developed back in Japan, and spin-off Sonic Spinball, developed elsewhere in Sega Technical Institute.) Instead, it was released in North America in early 1994, February 2, where Groundhog Day was redubbed “Hedgehog Day” for its release.

The Death Egg was damaged at the end of Sonic the Hedgehog 2, but it ended up crashing into a place called Angel Island, where Robotnik seeks to rebuild it. Same old stuff, for the most part, but this game also introduces Knuckles, a red echidna with dreadlocks. Basically Sonic’s frenemy, he’s antagonistic towards the blue hedgehog since he believes he’s in cahoots with Robotnik, but rather than directly confronting him, he mostly just sets traps for him (along with stealing the Chaos Emeralds Sonic obtained in the previous game, to keep them away from the evil Doctor). 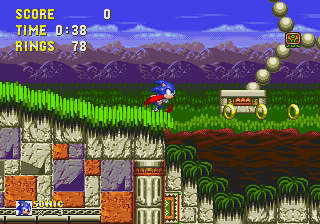 The level configuration takes after Sonic 2, with each Act being split between two Zones. However, there’s now a mid-boss at the end of each Act, taking the form of Robotnik’s other robots. The music also changes in the second act, into a different arrangement of the prior area’s theme, giving the soundtrack much more variety. The acts also lead directly into each other, and many Zones have short transitional cutscenes as well, that give the appearance of Angel Island being one big area rather than discrete sections. For example, Knuckles dumps Sonic down a waterfall at the end of the first Zone, leading to next water-themed area.

The standard shield has been replaced with three different elemental ones: the flame shield protects you from fire and lets you dive forward with a powerful lunging fireball attack; the bubble shield lets you breath underwater and protects you from certain weak projectiles, plus you can use a powerful bouncing attack; and the lightning shield attracts rings and can let you double jump. Even without a shield, Sonic has an extra attack that surrounds him with a small blade when jumping. It’s not much, but lets you hit enemies that might otherwise be slightly out of your range. You can now play as Tails alone, and he has the ability to play, allowing him to explore areas that Sonic can’t. However, he also can’t turn into a super form, nor can he use the shields’ special attacks. The game also features a battery backup save function, which was sorely needed in the old games.

There are two types of bonus levels now. When hitting a checkpoint post with enough rings, you’ll enter a sort of gumball machine, where you can bounce off the walls and get power-ups. Hidden throughout the levels are also gigantic rings, which look similar to the end level ones from the first game. These bring you to a different bonus stage called Blue Spheres, presented from an over-the-shoulder perspective and taking place on a huge checkered globe. Here, you can only turn in 90 degree angles, as the perspective shifts but the player stays facing forward at the bottom of the screen. The goal is to touch all of the blue spheres and turn them red. Touch any of the red spheres (including any of the ones already present on the map) and you’ll be kicked out. If you trace a circle around the edge of any grouping of spheres, you’ll turn them all into rings, which grant extra points and lives. The more spheres you get, the faster the game moves, until you’re making turns with split-second accuracy and the whole world is spinning around at a dizzying pace. They’re incredibly difficult, though a bit easier to manage that the courses from Sonic 2. As with before, beating one of these will grant you a Chaos Emerald; get all of them and you can turn into Super Sonic.

There are six Zones in total: Angel Island, which seems like the same tropical-type zone, until Robotnik’s machines set it entirely ablaze; Hydrocity, another take on the flooded ruins theme, but this time with a lot more speed; Marble Garden, another area made of ancient ruins; Carnival Night, similar to Casino Night but with an amusement park theme; Ice Cap, a snow-themed area; and finally Launch Base, where you square off against Robotnik.

The quality of these levels is mixed – Marble Garden’s kinda boring, plus it’s a little disorienting, with a few sections that you’ll just fall infinitely unless you jump onto a certain platform. Carnival Night also feels like a retread, too. There are also these spinning red and white barrels, which you’re supposed to manipulate by pressing up and down in a rocking motion. The thing is, there’s no hint as to how these are supposed to operate, and many gamers back in the day got stuck here. The levels in general are larger than Sonic 2, which isn’t a bad thing, but some do drag on, and in the stages where it’s possible to get lost, it feels like the ten minute restriction is too limiting. On the other hand, when it works, it works really well. The flaming Angel Island area has some cool effects, and even though Hydrocity isn’t exactly original, it’s also easily the best water-themed level in a Sonic game. Ice Cap Zone is gorgeous too, especially with the crystalline enemies and the cute penguin enemies.

The soundtrack is fantastic, though this time Masato Nakamura has been replaced by a whole bunch of composers. While some include part of Sega’s regular musical team (including Jun Senoue in one of his first jobs at Sega) and Howard Drossin, the roster includes several American producers, including Bobby Brooks and Brad Buxer. Among the most long-running controversies surrounding Sonic 3 is whether Michael Jackson supplied music to the game. They had previously collaborated on Moonwalker, after all, and Jackson was a well-known fan of Sega products. He’s uncredited, though various interviews have pointed to him contributed to the game in some manner, plus there are some stylistic similarities to Jackson’s music, particularly the use in some digitized samples. Brad Buxer did collaborate regularly with Jackson, which can account for the similarities. (The most prominent being the end credits theme sounding a lot like the song “Stranger in Moscow”. The Ice Cap zone song is also almost identical to a song called “Hard Times” by Buxer’s band The Jetzons, which was unreleased when the game came out but composed in the 80s.) In the end, it was revealed that Jackson recorded some music intended for the game as beatboxing, but how much of that ultimately ended up in the game (it would’ve had to been drastically reworked for use on the Genesis) is still a mystery. Some interviews with the musicians can be found at Sonic Retro.

There’s also a brand new two player split screen mode, with graphics redone exclusively for this mode. Rather than playing through levels from the main game, this mode is entirely about racing, with several new (extremely short) levels focused on competitive play. Most are straightforward, but a few have some traps that you can activate to slow down the other player. It’s fun, though too insubstantial to really have any lasting enjoyment.

The problem with Sonic the Hedgehog 3 is that it’s really only half of a game. Though Sega didn’t reveal it at the time, the developers had to split the game down the middle, with the second part being released later in the year. It’s not like there weren’t hints about this though – the level select points to many levels which don’t exist, and there’s a lot of unused music. Plus, it seems like Knuckles should be playable – you can catch glimpses of him on the spinning end-of-level sign, and he’s playable in the two player mode, but he isn’t in the main game. There are whole sections of the levels that are impossible to access as Sonic or Tails, unless you use a cheat code to fly through obstacles. Additionally, at six Zones at two Acts each, there are only twelve levels total. The game is generally easier than the previous two, and when considered with the save game function, it’s just way too short. 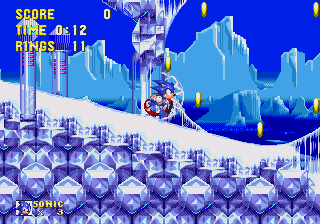 As a result, it’s hard to consider Sonic the Hedgehog 3 as a standalone product; it’s fantastic, but it’s just incomplete. Of course, the follow-up, Sonic & Knuckles, finished up the game and created the full experience.