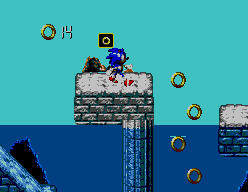 Sonic Blast is a lot of things. It was the last Sonic game on the Game Gear, being released at the end of 1996. It was the last first-party title for the system, with Sega focusing everything they had on trying to make the Sega Saturn successful. It’s also a drastically weaker game, with seemingly everything learnt from Aspect’s previous efforts having been forgotten to develop a very bland, uninspired platformer that should only be checked out by the most curious of Sonic fans.

Dr. Robotnik is back, and with an enormous fortress that he plans to power with the five Chaos Emeralds (yeah, five. Don’t know where the sixth one went off to). With no other choice, Sonic and Knuckles decide to team up to get the Chaos Emeralds back and take down Robotnik. 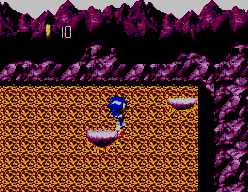 Sonic Blast is another 2D platformer with the goal of reaching the end of the level, with more changes to the formula. Sonic’s abilities have been tweaked, losing the Super Peel-Out but gaining the ability to perform a double jump while in the air. Meanwhile, Tails has been suddenly replaced by Knuckles the Echidna, who can glide in mid-air and climb on walls to further explore the levels. The character-specific power-ups from Chaos and Triple Trouble are gone, leaving you with just the shield, checkpoints, and ring bonuses to help you out.

Special Stages can now be accessed by finding a giant ring hiding in each stage, which takes you to a Sonic 2-style gauntlet where you collect a certain number of rings to win. These stages are functional, but very dull thanks to a lack of compelling challenges. Weirdly, you’re only able to get a Chaos Emerald if you find the Special Stage in the second Act (doing so in the first Act only gives you an extra life), and because there are only five Zones and five Chaos Emeralds, that gives you no room to screw up or miss any of the Special Stages. 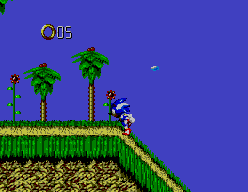 Like with previous games, you have a completely original set of levels to deal with. You start off in the tropical paradise of Green Hill Zone, and then travel through the scorching wastes in Yellow Desert Zone, the cracks and craters surrounding the Red Volcano Zone, and the underwater ruins of Blue Marine Zone, before you infiltrate Robotnik’s mechanical fortress Silver Castle Zone. As the names might imply, these levels are very basic in theme; while previous games would offer a twist on standard locations (e.g. a mechanical plant for pumping water), the stages here are your typical grass, desert, lava, water, and factory levels without anything to make them more interesting.

Sadly, this feeling of going through the motions also applies to the level designs, which have shed most of the open areas and alternate routes to make for bland stage layouts. While there are still secret routes, they only lead to dead ends with either a pick-up or a giant ring. What makes this worse is that the feeling of progression or flow seen in Triple Trouble is now gone, with only the odd set-piece or level gimmick to liven things up.

This isn’t to say that the level designs are bad (for the most part), but they’re so rudimentary and uninspired that it makes for a forgettable game. Accentuating this is how short levels are; most of the stages can be beaten in less than a minute, and the lack of progression means that they don’t feel satisfying to beat.

The gameplay itself is functional, but not that enjoyable. Characters move too slowly to be anything but a chore to play, changing directions is painfully bothersome, and air control is laggy to the point of making precision platforming a major annoyance. The boss battles are on the same level – they’re not dreadful, but most of them rely on the same strategy of jumping to dodge an attack and hitting Robotnik.

The only time Sonic Blast becomes anything more than boring is in Blue Marine, where it unfortunately becomes an obnoxious mess. Not only is it a massive difficulty spike that pops out of nowhere, but the stages are full of confusing maze-like layouts and maddeningly cheap tricks that only waste your time, and you are not at all equipped to deal with them because the controls (along with the framerate) become even slower when submerged underwater. 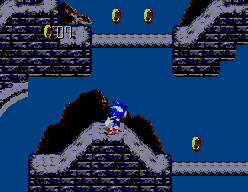 It’s baffling to think that this was made by the same studio that handled most of the previous Sonic platformers, considering how this game forgets just about everything learnt from before. Whether it was due to a change in development staff (only two credited members of Blast‘s team had worked on a previous Sonic game), or perhaps an attempt to simplify the game in order to render the game’s new visual style, Sonic Blast is a regressive platformer with nothing that previous games hadn’t done much better.

On the subject of visuals, the graphics are perhaps the most interesting part of the game, taking on a pre-rendered look similar to games like Donkey Kong Country and Sonic 3D Blast (an otherwise unrelated game, despite the similar name and release date). However, the system isn’t powerful enough to do them justice, so they look heavily crunched down. This isn’t helped by the small number of animation frames, which makes everything look very jittery and basic.

The art direction has also suffered as a result, with garish, bland backgrounds and a weird inconsistency with some characters being rendered in 3D while others are 2D. Sadly, due to the attempt at more complex visuals, the framerate is even more prone to slowdown than in previous games, which means that Sonic Blast not only looks worse, but plays worse.

The music is once again handled by Kojiro Mikusa, and is perfectly adequate. The melodies and instrumentation make a better attempt at fitting the mood of the levels this time around (e.g. the delayed notes in the melody convey the underwater vibe of Blue Marine, the harmonic minor oft associated with Arabic/Egyptian music is used to compose Yellow Desert’s theme), but only a couple of songs stand out.

Sonic Blast was developed exclusively for the Game Gear, but it was ported to the Master System a year later in Brazil, where the system was still, and continues to be, very popular. The port was handled by Tectoy, the distributor of SEGA’s products in Brazil and a studio known for developing many unusual ports to their consoles (e.g. Duke Nukem 3D for the Mega Drive, and Street Fighter II for the Master System).

While the extra screen resolution means that you have more room to see things, the port seems to have been done in a slapdash manner. The extra space on the screen often features graphical artifacts or glitches, and borders have been added to the menus and special stages, which remain at the same resolution as on the Game Gear. In addition, Blast was developed to take advantage of the Game Gear’s extended color palette, which results in this port having less detailed graphics.

A cute touch is that the boss of Yellow Desert is modeled after Sun Wukong, a central character from the 16th century Chinese novel Journey to the West (he’s most well-known these days as the inspiration for Son Goku from Dragon Ball). The boss wields a staff, clearly patterned after Wukong’s “as-you-wish, golden-hooped staff”, rides a cloud similar to the “somersault cloud”, and even holds a hand over the top of the visor to see further ahead – an iconic pose often associated with Wukong. 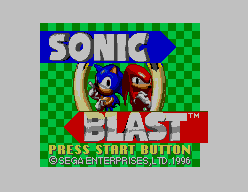 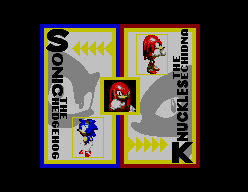 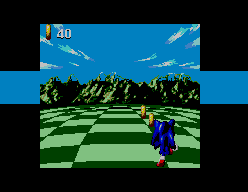