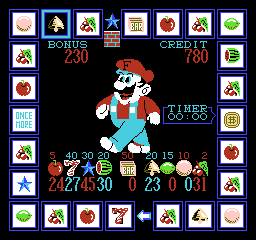 Unlicensed titles can be quite something – they appear to form a weird ecosystem of their own. So, to hell with decent game design and copyright laws! Let us take a look at one of the most iconic “gems” to be birthed on this scene: Diànshì Mǎlì.

This game was released in 1989 on the Famicom, but it technically remained exclusive to Taiwan, even though some copies might have found their way to Australia and Brazil. As with most pirate products, nothing much is known about its background apart from its Chinese origins.

Thanks to similarities with other Famicom bootleg games like Jackpot, it seems like Diànshì Mǎlì‘s production can be traced back to a company named Bit Corporation, a now-defunct Taiwanese pioneer of low-grade software and hardware that made its debut in 1982 on the Atari 2600. These guys actually created their own handheld system in the early ’90s, but in spite of its sort-of-worldwide release, it was a complete failure.

So, no, the game wasn’t actually made by “Namco Corporation” as the label on the cartridge sneakily pretends. Big surprise, huh? The fact that said label was actually stuck upside-down on some cartridges might have been one of many slight giveaways.

Diànshì Mǎlì translates to something along the lines of “TV Mario” – the closest we got to an official English title is the awkward “BIG TV MARY BAR” found in the dubious copyright statement. It’s a game port of a seemingly popular slot machine of the Republic of China’s gambling underground – shady-looking, Mario-themed one-armed bandits called “Xiao Mǎlì”. 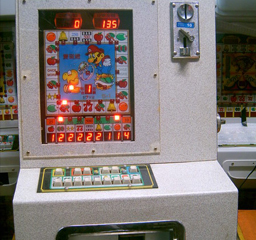 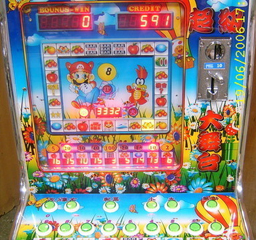 Examples of “Xiao Mǎlì” slot machines. None of these are legal Nintendo-licensed products, of course.

Gambling simulations were actually sort of popular in the late ’80s for some reason, even on the legal Japanese market, so unlicensed slot machines games can be found all over the place. But this one here is really special, mainly if not entirely due to its uniqueness as an absolutely unredeemable trainwreck.

As the game starts, you’re welcomed by a creepy smiling Mario rip-off – a toothless figure with a serious ankle condition. This grotesque figure was nicknamed Fortran by Internet communities due to lost data recovered in the game’s unused resources that seems to coincide with the letter on that fake Mario’s cap… so let’s just call him that.

The game uses a weird input layout that actually requires you to use TWO pads for some reason. Well… the more buttons, the better, right? Most buttons make a different sound effect and are used to bet on a specific icon seen on the wheel part of the slot machine. Once you’re good to go, you can launch the thing – using the second pad or spending 180 credits – and hope coins will rain down on you.

As the slot machine is done spinning, you get money based on your bets. Then you can score extra coins if the right thing comes out of the brick block Fortran hits – a horribly butchered chiptune rendition of Beethoven’s Ode an die Freue celebrates further gains. After that, you can either get your money by pressing Down or try to win even more by betting that sum on a card game by pressing Up.

It’s kind of hard to just tell what’s going on in Diànshì Mǎlì at first, to be honest. And even as you start to find your way, the reason why you would be waste you time doing that in the first place remains shrouded in mystery. The whole thing is just about blinky and bleepy stuff going off everywhere and you waiting for money to stack.

There’s more, though! Sometimes, a bonus mode can be triggered if the wheel ends up on the “coin” slot. When that happens, Fortran suddenly turns dark-skinned (?!) and the following message appears.

That’s right. The silliest bit being that Start isn’t the button you’re actually supposed to push. The best thing to do is mash A so you get as many coins out of the brick block as you can before the timer runs out. The possibility of pushing Start to rich remains Diànshì Mǎlì‘s most celebrated mechanic, as this short-lived moment is the only time where you feel like that noisy mess of a digital slot machine actually requires you to be more than a brainless sloth sitting in front of his screen.

Diànshì Mǎlì is a staple of the bootleg philosophy of game design in that it epitomizes the “why would anyone even want to play this” concept. It also might be one of the most pointless games to ever be released, even by pirate standards.