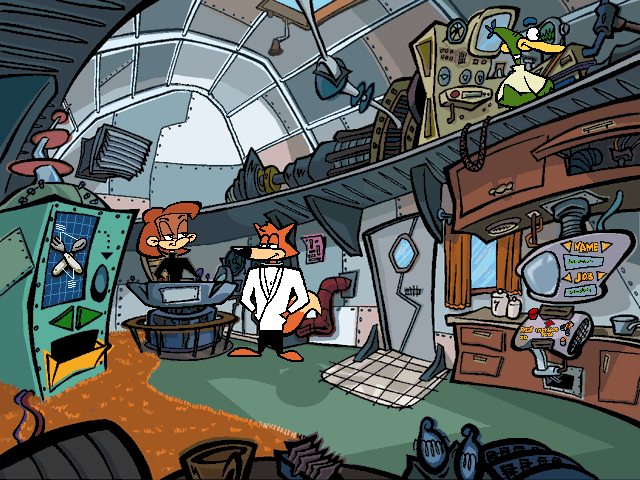 Two years after his debut, Humongous Entertainment’s suavest hero returned for a bigger but familiar adventure in Spy Fox 2: Some Assembly Required.

How do you top a plot against the dairy industry? How about world domination. Spy Fox 2 trades its prequel’s short-statured evil villain for someone even smaller and more evil: Napoleon LeRoach. Bitter from years of mockery for his size, LeRoach has placed a 1,000:1 scale Giant Robot Dog at the center of the World’s Fair, the collar of which houses his renowned revolving restaurant Chateau LeRoach. With every person that passes the turnstyle of the fair, the wind-up dog robot is charged further, and once the millionth customer passes the turnstyle, the Evil Dogbot’s rampage will begin. It’s up to our hero to prevent this rampage and save the world. 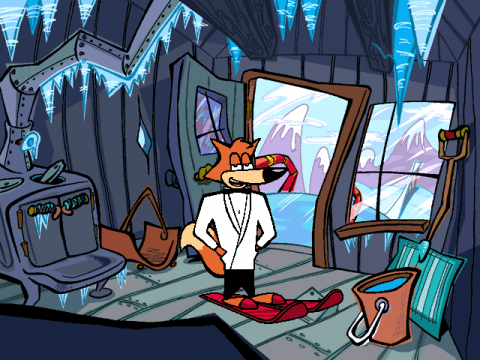 Spy Fox 2 begins “somewhere in the Alps” with Spy Fox on a ski lift meeting up with another informant, Canadian spy Agent Gracefully, who has found the plans for the Dogbot in the trash of Spy Corps’ evil nemesis S.M.E.L.L.Y.:The Society of Meaningless Evil, Larceny, Lying and Yelling. She also offers Spy Fox a gadget, skis dehydrated in pill form, in case he needs to make a getaway.

When the two are ambushed, Spy Fox makes an escape into an old shack. Here the game offers another tutorial of sorts. The player must open up their gadget inventory and drag the dehydrated skis to a bucket of water in the room. Now equipped with a mode of transportation, an escape scene ensues, with the game given some control over Spy Fox’s escape by clicking different spots on the screen. Whatever decisions the player makes, Spy Fox gets away, and has a rendezvous with SPY Corps’ big boss: The Chief. The Chief, a massive thing whose face cannot be seen, sends Spy Fox on a mission to investigate the shifty Napoleon LeRoach, who is addressed in the SMELLY package alongside plans for the robot.

In many ways, Spy Fox 2 mimics the original in its structure. There’s an evil villain with a super-weapon that must be destroyed, a vaguely European setting, a jazzy soundtrack and a secret base to infiltrate. There’s an exciting opening set-piece and introductory mission, followed by a randomized set of paths that bring Spy Fox into a secret base, followed by Spy Fox disarming the weapon, chasing the villain, and either letting them go or sending them to jail. 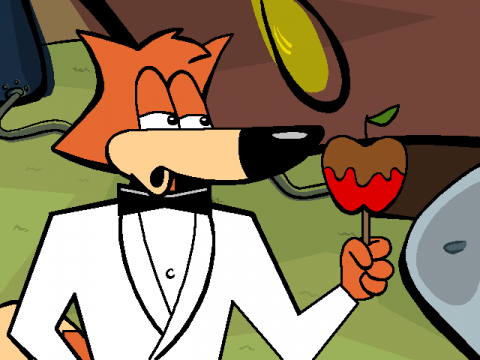 Many characters return too. Not only Professor Quack and Monkey Penny, but informant/anchor Walter Wireless and former Greek Cantina operator Bea Bear also make appearances. Given that this format worked well for the previous game, it seems Humongous Entertainment opted not to break the formula. Instead, they decided to expand the game’s scope, if not its difficulty, while maintaining the compact, interconnected map of its predecessor.

The World’s Fair setting is a great excuse to place Spy Fox in a singular location, while still filling that location with a variety of activities, from a skating rink to a massage tent to a greenhouse. With the Dogbot the centerpiece of the fair, the looming threat of LeRoach’s domination remains central in ways that the more abstract threats of William the Kid didn’t. The player must gain access to the interior of the giant robot through its achilles heel, and then they must find the deactivation code and Off Switch for the robot, which are hidden throughout the park.

If the developers took anything from the previous game, they seemed to decide to ease up on the amount of time-sensitive puzzles that required making inputs during specific animations. Save for the end-game chase scene, a simplistic alarm defusing puzzle, and another section where Spy Fox must stealthily flip a switch inside the Dogbot, most puzzles can be solved within any time window. This is probably for the  best, as the time-sensitive puzzles were among the most frustrating parts of the first game. 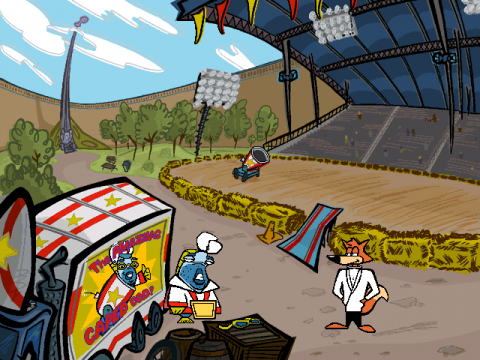 While the game’s story is stronger and more coherent than the prequel, some of it also feels more repetitive. The story here is less convoluted than the prequel, with Spy Fox meeting the villain in person within the first twenty minutes, but this also means the mission feels more like a list of tasks than the more linear, evolving case of the original.The feeling of intrigue of the prequel, as well as the general prickliness of many of the characters from the original game, is somewhat missed.

Many of the new characters are fun, like washed-up daredevil The Caped Cod and his young fanboy, a puppy named Elmo whose voice is suspiciously similar to the Sesame Street Character. There’s less of a vibe of a spy film in general from these characters, however. The original game featured a Captain Kirk parody, so it’s not like Spy Fox was ever the most specific of satires, but it still would have been nice to see more supporting characters who follow spy tropes like Russian Blue or Mr. Bigpig. 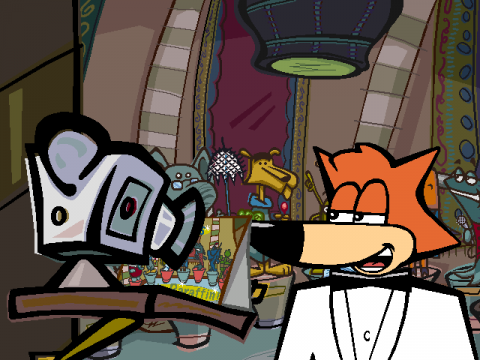 Spy Fox does find plenty of chances to actually be a spy in the game, like when the player creates a Fake ID to enter the fair, or when Spy Fox wears a chef’s uniform to disguise himself as famed chef Wolfgang Duck. Indeed, many of the  best parts of the game involve Spy Fox being duplicitous in order to accomplish his greater goal. That kind of mischievousness is the source of much of the humor in the game, outside of its myriad puns and cultural references.

Like Dry Cereal, Some Assembly Required can be completed in multiple ways depending on the randomized “paths” the game picks for its completion. Certain Spy gadgets only work on certain paths, and map and character details also change depending on these paths. The Off Switch, for example, may be found in the mouth of a mutant venus fly trap, or in liquid form in a sci-fi matter transformation device.

Also like the previous game, these paths aren’t created equally. Spy Fox 2 has a lot of funny, well-realized gags, but many of them are locked into that second path. The player also has to play through the entire introductory sequence before they know which path they’re on, meaning restarting the game to get a new path can be a time-consuming, tedious project. Indeed, the game doesn’t seem to allow the player to get on a new path until they beat the game and restart it.

Overall, Spy Fox 2’s writing comes from the same vernacular as the previous game: a mix of puns, animals, and cultural references that no child of its era would ever understand, like a hack chef who is clearly a play on Julia Child. This midcentury aesthetic extends to the game’s spy technology and the general retro-futurism of the world’s fair, with silly takes on cloning, robotics and technology. 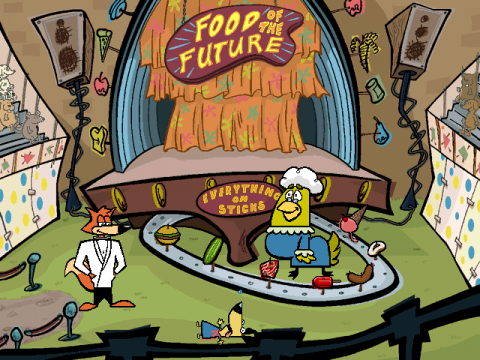 Visually, the game features occasionally choppy animation, but what appears to be a richer color palette compared to the first title. Areas like the interior of the Dogbot, the greenhouse area, and the miniature Wee World section are realized in the first game’s modernist cartoon style, and with an earthy richness that mixes a painterly coloring with the series’ characteristic thick outlines. The Dogbot itself makes for a great visual set-piece, looming over many of the game’s outdoor areas. As a later SCUMM game, the engine shows some of its age here especially when played on higher resolution screens, but the artistry of the background and character design helps make up for that. The biggest downside might be the lip-syncing, which is accurate enough but done almost entirely through awkward keyframes.

Spy Fox 2 does not feature any high stakes card games, but it does feature perhaps the best minigame Humongous Entertainment made: Things From Space.

Found within the SPY Watch’s FUN section, Things From Space is a vertically scrolling space shooter that proceeds over a series of levels. Compared to the average shoot-em-up, it’s fairly simplistic and slow-paced, an able to be controlled with the mouse, or with the arrow keys and shift button, and the first few levels feature almost entirely asteroids, with only the occasional enemy ship. Still, it makes for a deeper and more rewarding experience than Dry Cereal’s Happy Fun Sub.

There are three weapon types in Things From Space: a default purple sound-wave, a green phaser, and a red bomb. These weapons come out of certain defeated enemy combatants and asteroids, and can be upgraded one level every time they’re collected, until they’ve been upgraded twice. The red weapon is clearly the best choice, with the weak purple in second, and the risky phaser prone to shutting off the moment the player is about to get hit by an obstacle or bullet. The weapons cannot be freely switched between, although their upgrade status is saved, so if the player goes from a level three phaser to the bomb back to the phaser, they’ll maintain that level 3 status on the weapon. Weapon upgrade status depletes one level when the player loses a ship. The player ship dies when hit by an asteroid, bullet or enemy ship, and the player has three lives at the start of the game. An extra life is added after the first 10,000 points scored. 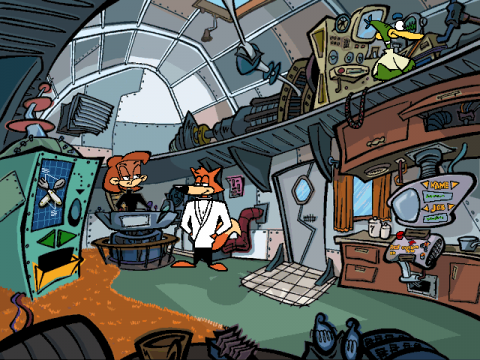 A simple scoring system is followed to reward hits, as well as reward bonus collectibles which come out of defeated combatants and asteroids. While getting high scores in Happy Fun Sub was largely not worth it the effort, Things From Space is a much more comfortable game to advance in. It helps that the first couple levels are basically tutorials, with the first “boss” type enemy not showing up until level 6. After that point, things intensify quite a bit, with faster paces and much more enemy bullets. All in all, there are twelve levels.

Like its predecessor, Spy Fox 2: Some Assembly has stayed in print over the years. It resurfaced on Steam in 2014, with iOS and Android ports following in 2015, all using ScummVM.