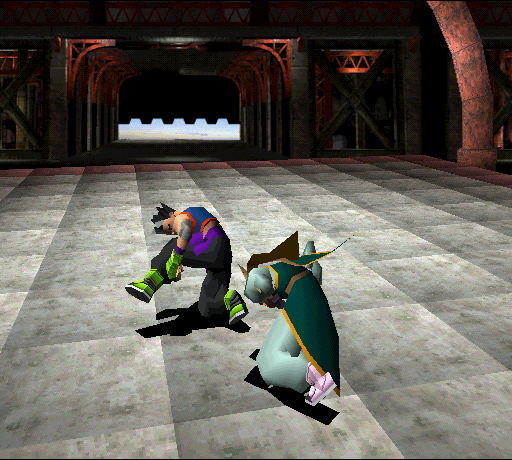 Often, versus fighter sequels are content with offering a bit of new content and some minor tweaks; Tobal 2 is not one of those, boosting more improvements and additions than you might think possible with just a year’s worth of development.

The pace is significantly faster, which is especially noticeable with quick characters like Epon and Chaco, though it’s not always consistent, and it’s still not quite as tight and responsive as a Virtua Fighter 2. Everyone’s moveset has been heavily extended, and their fighting styles are more clearly defined. They’ve also been given timing-specific moves that can extend chains and combos. 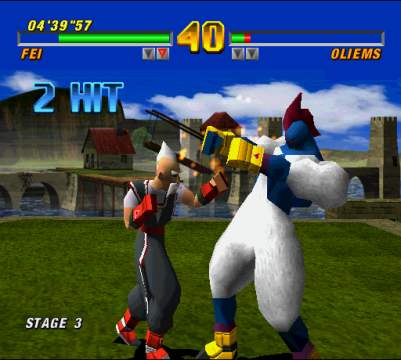 According to the manual, Emperor Udan has modified the rings, enlarging them and modifying their gravity in order to facilitate juggling combos. As in Virtua Fighter, characters fall at different speeds depending on their weight, so that lighter contestants are disadvantaged. This is compensated by the fact that they tend to have the longest combos. Likewise, the impact of moves and the damage they inflict vary according to distance, adding another layer of technical depth to the proceedings. Unless you’ve been stunned or dizzied (another addition), you can land on your feet by pressing the throw input just before touching ground, though in some cases it’s better to actually fall, and you can stay down as long as you like so you don’t get hit by a powerful attack as you rise.

Moving further away from the first game’s half-realistic fighting, each character now has a projectile attack. These are unique in that they cannot be blocked, but using them costs health; they can even be charged for a potentially devastating attack, in exchange for more of your life. There are also short range unblockables; both types are slow and can be interrupted or dodged without much effort if they aren’t set up properly, especially since flames surround the fighter’s arm or leg as they’re performed, providing the opponent with a helpful visual cue. There also is a new counterattack mechanic triggered by pressing forward + mid right after a successful block, and a few characters can catch and reverse opponent attacks. 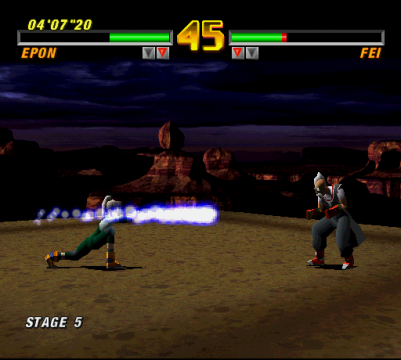 The grappling system has seen some changes as well. The controls have been simplified, and all throws can now be escaped; the timing required is different for each, but you usually have time to react, whereas in the first game you had to anticipate the throw. You can hit enemies multiple times after grabbing them, and if the opponent doesn’t block, they will be stunned and turned around after a few blows, opening them up to further attacks, though that too can be broken out of for a counter. In fact, they went a bit overboard with the defensive options; at a high level of play, grappling sometimes turns into an absurd dance of back-and-forth reversals with no damage to anyone involved.

Dream Factory clearly realized that Tobal 2 was more complex to take in, so they included a nice tutorial video highlighting the major mechanics, complete with spoken explanations. It’s all in Japanese, but the visuals alone are helpful enough. The Training mode is also more thorough, and videos of matches between expert players can viewed as well. The CPU’s level is generally much higher, though it has some major blind spots that can be exploited. 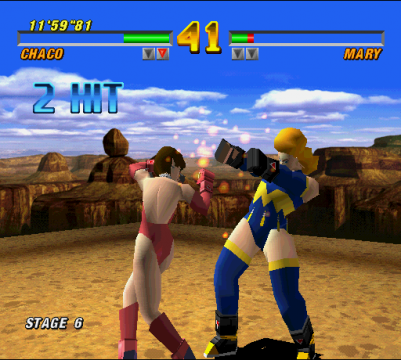 While there are just two additions to the main roster, Tobal 2 holds the Guinness Record for the highest number of characters in a fighting game, with over 200. This is because monsters from the Quest Mode can be captured and used in the main game, and there are all kinds of ways to unlock others, from beating the game on various difficulty settings to recording and watching matches and trading monsters through memory cards. Most of them are novelty characters with limited movesets, but they can be a lot of fun. It’s certainly worth going through against the CPU as a dog, if only to see its stylish breakdance moves upon finishing the game.

The last Virtua Fighter alumni to jump ship was composer Takayuki Nakamura, who handled all the music this time. The soundtrack has a cohesive sound, very upbeat and consistently funky, as exemplified by the insanely infectious intro song. 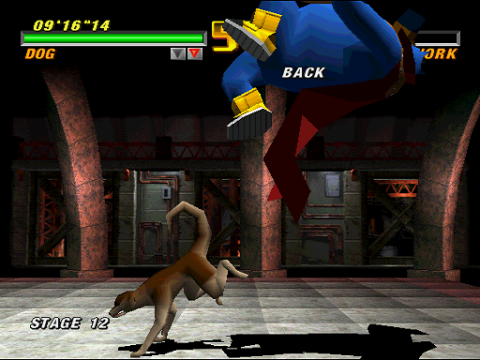 Each character now has his own FMV ending. They mostly present bittersweet victories in a comedic manner. Chuji, for example, is seen sitting in a tavern, laughing loudly as his miner friends feast and drink at his expense. In the next scene he is awaken by an angry barkeeper waving a huge bill. He dumps a large bag of money on the table before walking home with a sigh, tossing his last coin to a beggar that looks suspiciously like Nork.

The character models have been given textures and made larger, but the backgrounds are a letdown. Several rely on pre-rendered images that clash with the 3D rings and characters, and most depict much more banal surroundings. They’re not all bad, per se, but it’s a shame they didn’t pursue the style introduced in Tobal No. 1. 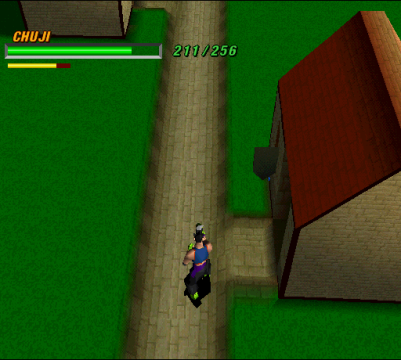 The quest mode, too, is much more elaborate. The hub has been replaced by an interconnected area spanning two villages, a desert and a castle, and there’s even a very basic storyline tied into the main game, though it’s disappointingly generic considering the setting’s potential. A fan translation has been available since the late 90s, but it’s really more of a beta, with some key lines spilling out of the screen, context-related mistranslations and the ending still fully in Japanese.

Fighting aside, it plays like a full-fledged roguelike, 6 to 10 hours long. You can equip stones to boost various stats, and limbs level up independently as they’re used. There are tons of potion types now, and you can no longer identify them by throwing them at the enemy, so they’re a lot harder and riskier to manage; whereas poison could only reduce you to 1 HP in the original, this time plenty of potions can kill you outright. Bizarrely, although there are shops in town, the potions they sell are unidentified unless you’ve used one of the same type in the preceding dungeon. Who would want to buy a product, having no idea what it does? If you pay attention to the prices, at least, you can guess some of them. Stones are also cursed more often than not, so it’s bad idea to try them on unless you’ve got a White Potion, which remove curses and heal poison. You can’t find those as is, though; they have to be created by mixing potions, which thankfully isn’t too hard to do. Stones, too, can be combined in order to create more powerful equipment. 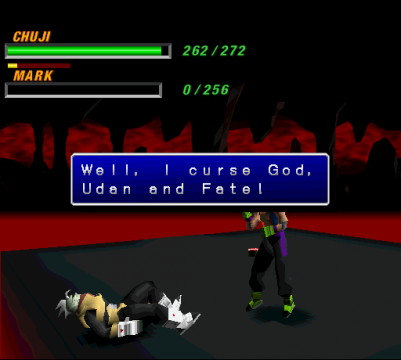 From the quest mode’s fan-translation

You get hungry and must eat to keep up your stamina; eating while already full or nearly so increases your defense, which should be done at every opportunity. It’s generally far grindier, and somewhat duller, than the original Quest Mode. There are many more monsters per floor, and wandering monsters even show up after a while; the game expects you to kill most of them in order to keep up, particularly those that drop food. You can’t revisit a dungeon once it’s been completed, so if you find yourself too weak for current enemies, it’s too late to do anything about it. Items can only be obtained by defeating monsters or bought outside, so dungeons consist purely of running around and fighting a lot, which, at least, is pretty fun.

After beating the five main dungeon, you gain access to a 38-floor cave, which is basically every other dungeon combined, with your stats reset to level 1 and all your items gone. It’s a nice challenge and can get pretty involving, but it’s a pain that it doesn’t let you save as it takes hours to finish.

You can import your main character from Quest mode to the other modes of play; since the impact of hits depends on your power versus your opponent’s defense, a high-level character can knock a regular Tournament mode fighter halfway across the ring with a single punch, or even beat them with a single move. 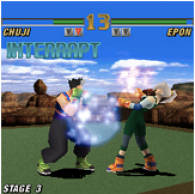 Picture courtesy of the Internet.

It’s uncertain why Tobal 2 was never released outside of Japan. It sold decently there, and the critics where enthusiastic; it was one of eight games to get Famitsu’s Diamond Award in 1997. Square representatives have made contradictory statements; either North Americans only bought the first game for the Final Fantasy 7 demo packaged with it, or there was insufficient room on the CD for an English translation. Whatever the case may be, it’s one of the best fighters of its generation, and its flashier nature brings it more in line with Western tastes; it seems like it could have done well. In any case, there was never a Tobal 3, either. Square sold off their shares in various subsidiaries and affiliated developers during the PS2 era, choosing to refocus on their bread-and-butter, RPGs. Toru Ikebuchi returned to Sega where he directed Virtua Fighter 4, while Seiichi Ishii, rejoined by Kunihito Nakata, went to work on Kakuto Chojin, which reprises many ideas introduced in the Tobal games.

In 2008, Tobal M was released on Japanese mobile phones. There is little to be found about it, and probably no way to play it anymore; it seems to have been a simple port or remake, with a new Interrupt mechanic possibly based on Ehrgeiz‘s.