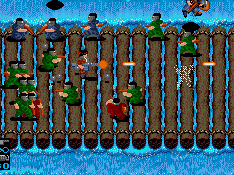 While Data East was one of the most prolific arcade developers in the late 80s and early 90s, they were hardly pioneers. Most of their games consisted of re-imagined versions of competitors’ titles, something that came to bite them in the ass with their gigantic Street Fighter II rip-off Fighter’s History, which famously got them sued by Capcom. So there’s no real doubt that their popular game Heavy Barrel came about when one of Data East’s executives looked at SNK’s Ikari Warriors and figured, yup, we need one of those! To be fair, though, a game doesn’t necessarily need to be innovative to succeed. They just have to be good, and Data East, for all the lack of ingenuity, could make some damn good games. 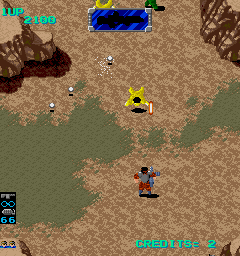 One of the most popular movies of the 80s, especially when it came to video game inspirations, was Rambo: First Blood Part II. And why not? It had an incredibly manly dude blowing stuff up. This prompted Data East to develop four games based on the subject of American action movies. They technically aren’t sequels, although they share some staff. The first two – Heavy Barrel and Midnight Resistance – were directed by Koji Akibayashi, while the second two – Bloody Wolf and Desert Assault – were directed by Yoshiaki Honda. They also tended to reference each other’s names in the credits, suggesting they shared a cubicle or something of the like. Despite them all being inspired by the same basic source, they’re still unique games whose elements occasionally share some overlap. They’re also all pretty great, to varying degrees.

Heavy Barrel, as expected, is an overhead action shooter featuring two beefy commandos, running through jungles and assorted enemy fortresses while killing everything in sight. In addition to your regular gun, you also have a copious supply of grenades. The game even uses the same rotating joysticks as Ikari, so you can position your soldier to aim in a specific direction while moving in another. 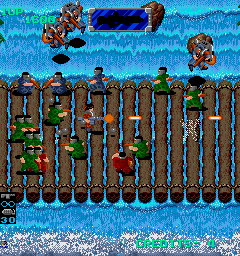 Heavy Barrel really only changes up the formula in minor ways. In addition to moving straight upward, the screen also scrolls horizontally, on occasion. You will find numerous keys throughout the levels, along with matching locked boxes, which hold a variety of goodies. You will never have enough keys to unlock every box, and there’s no hint as to what’s inside, so unless you’ve already played the game through and memorized everything, you won’t know what you’ll be getting. There are, of course, a handful of alternate weapons, all with limited ammo. These include lasers, spread guns, and flamethrowers, and a spiked ball that replaces the standard grenades, which spins around you a few times.

The real treat, though, is the titular Heavy Barrel. In fact, it’s such an incredible weapon that it must be assembled by grabbing six separate pieces. It’s extraordinarily powerful, as it fires out gigantic balls of light which can kill practically anything in a single hit. It also only lasts for a period of 30 seconds. 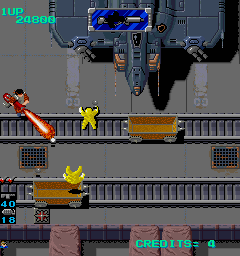 Even though it’s heavily derivative, Heavy Barrel is still a really fun game. The graphics are better than the Ikari Warriors games, and the music is pretty catchy. The enemies tumble over a few times when they’re shot, which is satisfying to watch when you roast them en masse with the Heavy Barrel weapon. The only issue is that some of the bosses and level structure are reused in the later stages of the game.

The NES version is a fairly decent port. It reformats the screen so it’s no longer vertically oriented, and some of the levels are slightly adjusted to compensate. The aiming is gone, though, so you can only fire in the direction that you’re moving in. Due to system limitations, there are also far fewer enemies on screen at any given time, and it even flickers when there are only a couple. Despite the obvious graphical downgrade, though, it’s still quite good, and certainly better than the NES ports of Commando or Ikari Warriors. 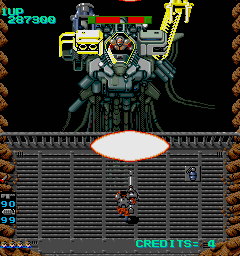 The computer versions, on the other hand, are absolutely dreadful. As far as the controls go, they simply lock your direction when holding down the fire button. The action only takes up a small portion of the screen, as well, resulting in an extremely cramped experience. The hit detection is terrible and the enemies attack just way too fast, making progress incredibly difficult. There are no other continues, either, but it’s not as if you’d want to play it for any extended period of time, anyway. 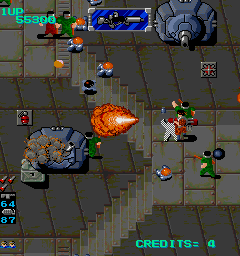 The only way to get a close-to-arcade-perfect experience is with the Data East Arcade Classics collection for the Nintendo Wii. When using the Classic Controller, it maps movement to the left analog stick and aiming to the right, making it far easier to play than on any emulator, which otherwise requires mapping to a mouse. However, the game runs slightly slower than MAME. According to the programmers, this is more accurate to the arcade version, as MAME runs it too fast. 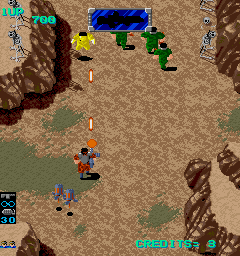 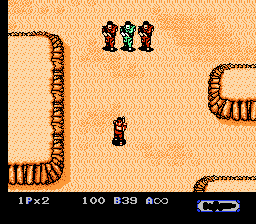 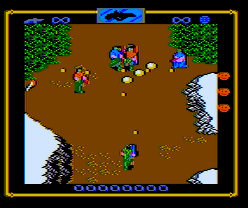 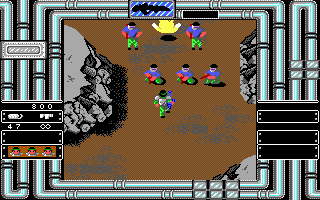