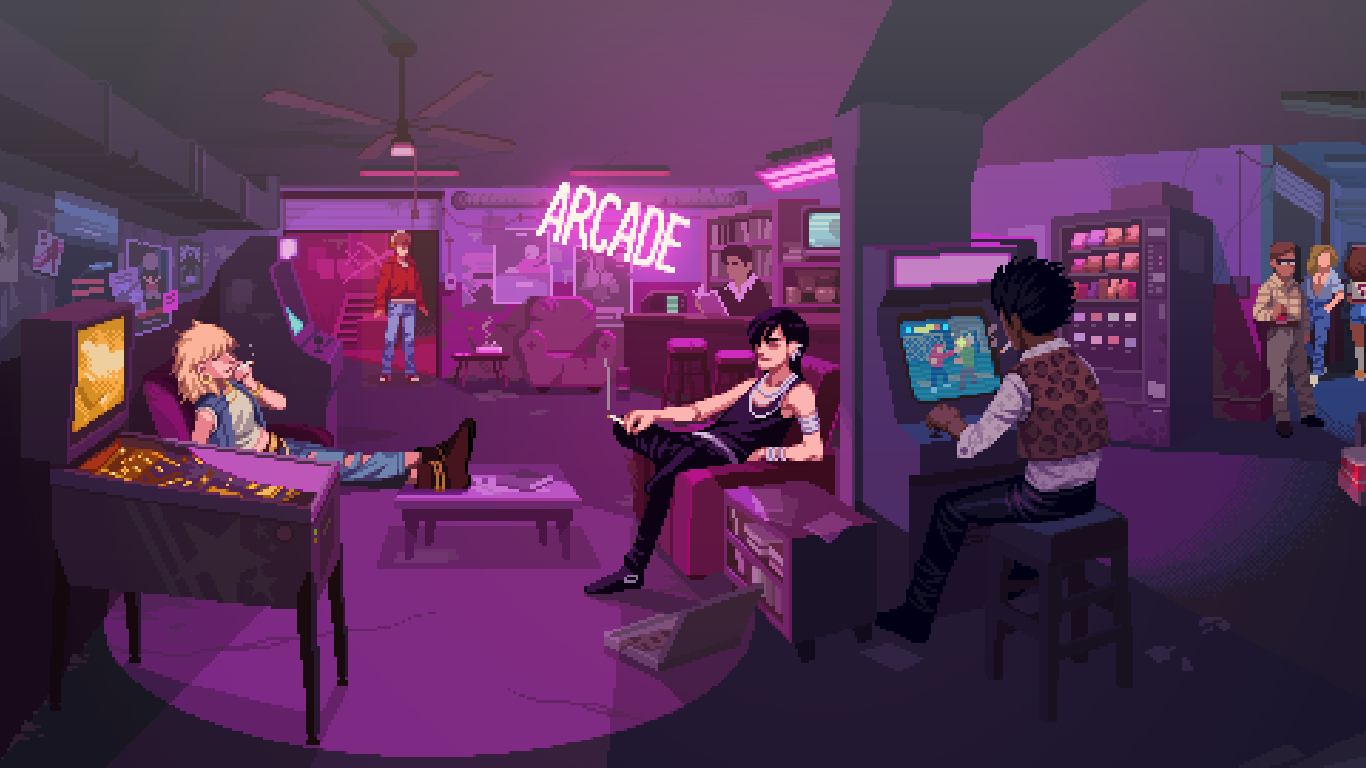 If there’s one thing in gaming that we’ve built a mystique around, it’s definitely the arcade. The glitz and glamour is part of the appeal, but there was also how this space could be a sort of escape we couldn’t find anywhere else back in their heyday. People have started professional gaming careers in arcades, as bizarre as that sounds. Oddly, there are very few games about arcades or their cultural place in the medium, with exception to strange oddities like The Coin Game, and even those are more interested in the cheesy ticket machines that became the norm in the 90s and on. Games including arcades or acting as a virtual arcade do exist, but trying to find one specifically about the magic of them has been a challenge until 2019. Enter 198X, a crowdfunded project from Swedish Hi-Bit Studios, which uses the otherworldly arcades of the 1980s for a coming of age story. 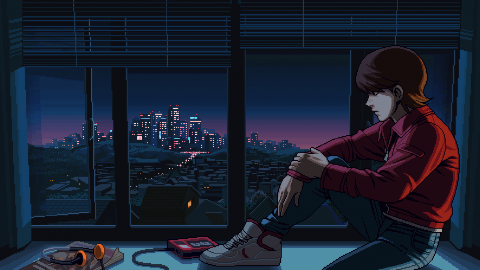 How much it succeeds at that is debatable. The game is narrated by the main character “the kid” (played by Maya Tuttle) as he goes about musing poetically about his disillusionment with the world, his troubles, and the incredible escape in the world of the arcade. The arcade games you play act as bridges between story beats and metaphors for what’s happening in the kid’s life or his emotional state, functioning as narrative and gameplay at the same time.

It’s a clever idea that gets utilized well, usually shifting between them and cutscenes with controlled transitions, like driving into a light traffic highway at night as the narration kicks back in during your smooth cruise. These are the most memorable moments, especially in the last game as you start to realize what events the game is mirroring in the kid’s reality. Helping is Tuttle’s performance, keeping things detached and moody, creating a reflective mood at the right times. 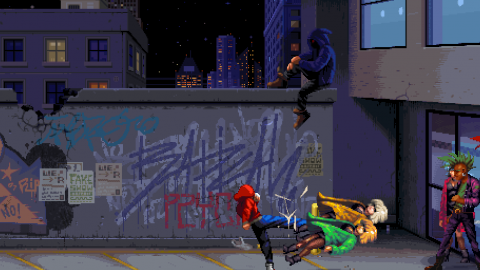 The problem is the script itself. Said script is made up almost entirely of the kid’s inner monologue, so we’re never given a break from his perspective. This is an issue because the kid is supposed to be a sort of everyman, someone you can easily relate to, and there’s certainly a lot there to work with (particularly with personal loss and escapism). However, he never really talks like person, but more like a collection of clichés. He constantly complains about high school hierarchies, something only adults complain about in hindsight. Even some of his talk about arcades is a tad ridiculous, comparing them to other worlds he constant dreams about. That’s overselling the mystique a bit.

The kid is like if you took every 80s coming of age story cliché and sculpted a character from them without a hint of irony or parody – which might be the point. The idea may have been to repeat the same trick with the use of arcades, tapping into American mythology of the 80s for emotional effect, and it only half works. Some of the words thrown out are good at creating atmosphere, but others just make you think about a bunch of 80s movies you vaguely remember or pull you out as the narration gets a bit too hamfisted. 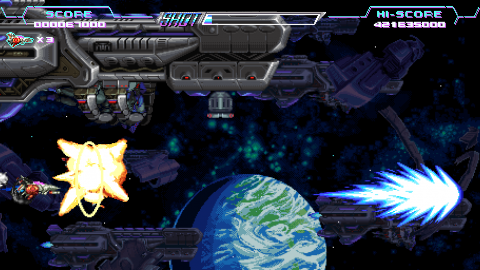 It’s still an admirable attempt, and it succeeds more than it stumbles. The arcade games themselves fare much better, with five different ones covering different popular genres. The last two games cheat a bit, though, being an auto-runner and an RPG. Those weren’t exactly popular genres in the 80s arcade scene, though they at least manage to be fun in themselves and look the part. The first three do fit the theme better, starting right off with a beat-em-up, moving to a shoot-em-up, and breaking things up with an Outrun style driving game. They also slowly build in difficulty, with the fourth game being the hardest overall as the fifth acts as a mechanical breather to let the story take center stage. 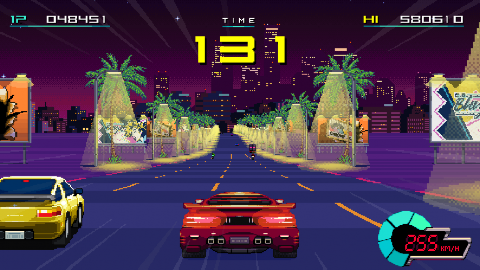 None of them are quite as good as the games they’re inspired by, but they do a good job of emulating the feel of them. Beating Heart, the beat-em-up game, will give anyone who played Final Fight flashbacks, especially when you reach the big guys, and it even ends on a possible Double Dragon reference. Out of the Void, the shoot-em-up, does not stray in the slightest from its clear Gradius inspiration. The Runaway, the driving game, manages to include some familiar graphical effects to Outrun, and its general look is reminiscent of Pole Position. The last two odd ducks, Shadowplay and Kill Screen, take aesthetically from popular themes, like ninja games or cyber worlds, the one really out there inclusion being what basically amounts to the appearance of SHODAN from System Shock at the end of Kill Screen (though there’s a clear purpose for it). 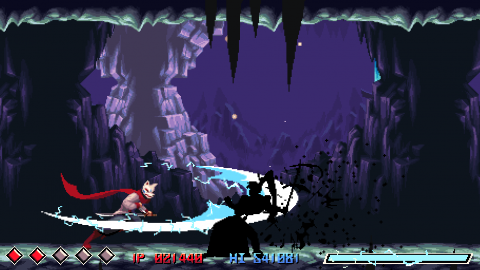 Each has the right framework, just without some of the mechanical complexity. Winning in The Runaway just requires you to keep accelerating and avoiding bumping into things, for example, no gear system anywhere to be seen. This is a benefit overall, as it prevents the games from distracting you from the story too much, needing less mastery to complete them and continue forward. They’ll definitely give you a nostalgia buzz, despite the more simplified design, but the one thing the game gets right at all moments is style. 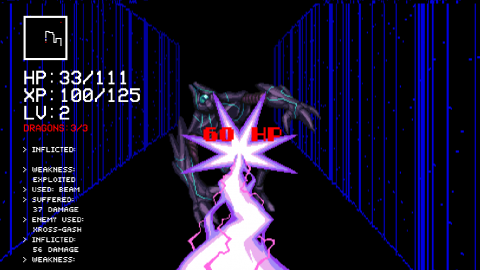 The team really did their homework when doing the sprite art. This is some fantastic spritework, even above Owlboy, every moment feeling like something that would be pouring out from the most high end of machines. All the games look authentic, but the cutscenes steal the show with the breathtaking detail and color use. While the animations are lacking, they all do exactly what they need to do, every scene looking like a moving painting crafted with endless pits of love and care. Every screen just feels like a real place, helped by some brilliant use of rain effects and empty space.

They also got some fantastic composers on the staff to emulate the sound and themes of old genre classics, even hiring on Yuzo Koshiro for Shadowplay’s music for a little extra authenticity. Yes, that is the composer for The Revenge of Shinobi, Streets of Rage, Actraiser, Ys, and countless others, and he absolutely kills it in his segment. That alone is proof that the team was all in on their vision, wanting to share their love for the arcades of old they spent so much of their time in, and that is one aspect they absolutely accomplished with flying colors. 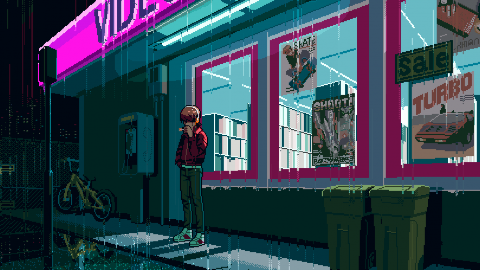 198X seems a bit costly for its short hour or so length, but the mastery of craft on display is well more than worth it. It is a real love letter to gaming that tries to express just how much this medium can change people for the better and lead them to carry on into their dreams, no matter how harsh things can get. It doesn’t quite meet that ambition entirely, but the look and sound of it carries that load well. It’s a messy project, but one filled with passion that really nails things where they needed to be nailed. It seems the team wants to make more installments, and more power to them. We could use more retro-throwbacks with ambition like this.