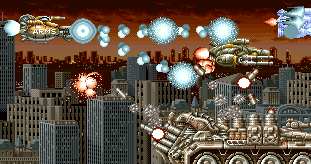 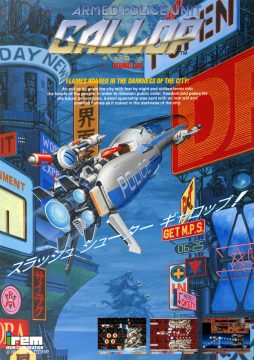 rimented with a few other shooters, including the similarly-themed X-Multiply and the dark fantasy Dragon Breed. Before returning to their famous series, they also developed Cosmic Cop, more widely known under its Japanese name Armed Police Unit Gallop. It certainly looks like an Irem game, though it doesn’t really play like one.

As a member of the Armed Police Unit, it’s your job to chase down a number of dangerous “mad cars” that are rampaging around the city. The main gimmick of Gallop is that it’s a shoot-em-up crossed (loosely) with a racing game. If you move your ship to the right, the scrolling speeds up; similarly, move left and you’ll slow down. At the beginning of each stage you get an expected time to beat, giving an incentive to give chase as quickly as possible. In pursuit, you’ll face the usual wave of shoot-em-up enemies, eventually ending up in a boss fight. 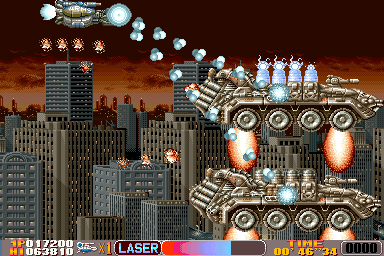 By default, your ship, the R-11B Peace Maker, is equipped with both a regular gun and a homing laser. The gun can be upgraded a few times, with unlimited firepower. The laser attacks with three streams that automatically lock onto the closest targets, though its use is limited by a meter on the bottom of the screen. Though it recharges on its own, there are also additional power-ups that will replenish it faster. Along with this, the Peace Maker can be equipped with one of three secondary weapons, including assorted bombs and missiles. The damage system is rather generous, as taking minor damage will simply take away your secondary weapon before killing you, and you can even bump against the walls without it destroying you, providing you don’t ram into a wall.

For as much as the game seems to emphasize the timer and chase aspects, they actually aren’t all that important. There’s no penalty for beating a level under the expected time limit. Similarly, there’s even an extra clock for boss fights, and even if you manage to run that out, you’ll still get congratulated and ushered into the next stage. Dying sends you back only slightly, though time continues to move, so obviously this will set you back a few seconds. The reward for quick completion amounts to extra points, emphasizing the score more than most Irem titles. 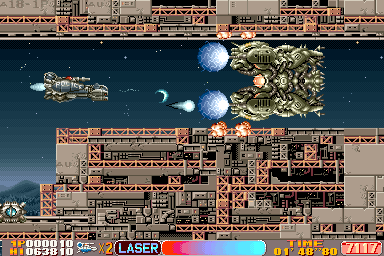 Still, it’s not like the ability to control the scrolling is useless. There are a few areas where you need to blast through blocks and should expect to slow down just to keep yourself from colliding into it. The second stage is a sewer where you attempt to fly underneath pipes of sludge that turn on and off. The final stage is basically a “speed up” zone from Gradius, completely with diagonal tunnels and tunnels that close in behind you.

Cosmic Cop is certainly an unusual title in many regards. The visual style is similar to R-Type II, fully detailed but very dark, taking place in a dingy, futuristic city. However, despite some excellent mechanical designs, it never quite reaches the memorable grotesqueness of other Irem titles. There’s not as much variation in the scenery either, giving it a somewhat repetitive look. The upbeat music matches the high-speed action of the game though not its dark visual style.

It’s certainly an interesting game, but it lacks the depth of Irem’s other titles, and it’s also fairly short, clocking in at just five stages. Those with a preference towards reaching and perfecting high scores will find more interest here than other shooter fans. 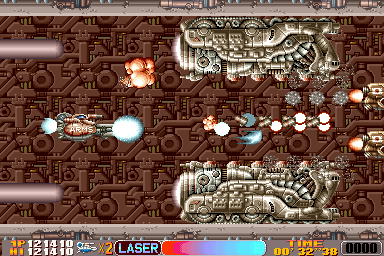 Irem also christened Cosmic Cop as a spinoff of the R-Type series. It takes place in the same universe, during the same time period as R-Type Delta, during what’s known as the Demon Seed Crisis. The mad cars have technically been driven berserk by the influence of the Bydo, and it gives a view of the combat on Earth, as opposed to the intergalactic battle of the core R-Type games. The first boss of R-Type Delta, the Moritz-G, is a human created orbital super-weapon driven crazy by the same event as told in Cosmic Cop. 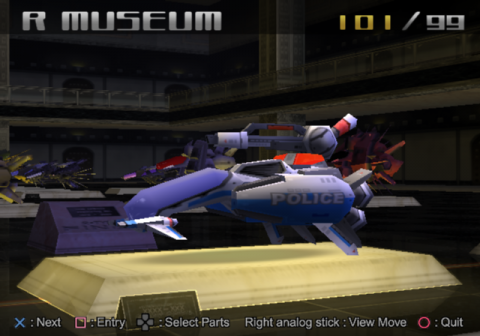 The R-11B Peace Maker is featured in the museum gallery of R-Types for the PS1, and the ship, as well as a few enhanced versions, the R-11S Tropical Angel and R-11S2 No Chaserare, are playable in R-Type Final. Of course while the game was initially advertised as being part of the R-Type series, much of the backstory was written in retroactively.

The racing element also influenced a few other subsequent shoot-em-ups, including Raizing’s Shippu Mahou Daisakusen: Kingdom Grand Prix (1993), a fantasy shooter which actually takes place in a race tournament, and Data East’s Skull Fang (1997), where you control the throttle of your fighter in order to chase down boss ships.

Outside of the Irem Arcade Hits compilation, which features an emulated version, Cosmic Cop was not ported to any home console.