Rock ‘n Rage is a comedic, music- themed run-and-gun, featuring characters that teeter perilously close to infringing territory. During a performance, Sheena (Easton) is kidnapped by a disembodied hand and whisked through time, so band mates John (Oates) and Rick (Derringer, probably) jump into the portal after her. Their adventures take them through Ancient Egypt, medieval England, revolution-era France, the Italian Renaissance, and finally to modern day Japan. 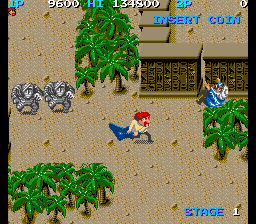 The screen scrolls in eight directions, and each stage is usually a fairly simple maze. Most consist of two maps and then a boss fight. Your main weapon is your guitar, which can be used to not only smash enemies, but also to reflect projectiles. Further, you can find assorted power-ups that let you wail on your instrument and shoot out musical notes. The difficulty is fairly well-balanced, outside of a few boss fights, though there aren’t any continues. The core of the game is alright, but there’s a reason why most other run-and-guns (Mercs, Ikari Warriors, etc.) are linear, because these sort of labyrinthine levels just aren’t much fun to explore, and it kills the pacing. 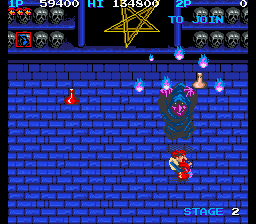 The draw of the game lies in the absurd concept and the goofy stuff you’ll come across. Enemies include knights, vampires, evil violin players, mummies, a Tutankhamen mask, and other oddities. The final boss even sort of resembles the drummer from KISS. Throughout the stages, you can find various historical figures or works of art, most of whom will grant a bonus – Cleopatra, Napoleon, Venus de Milo, and the Statue of Liberty. There’s even Drago from Rocky IV tossed in there, for some reason. 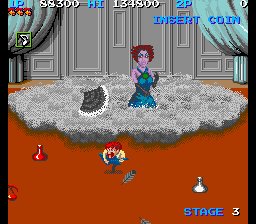 Much of the music is FM- based recreations of assorted classical and rock songs, including “Woman” by John Lennon, “Twist and Shout” by the Beatles, “Rock Me Amadeus” by Falco, “Like a Virgin” by Madonna, and “Born in the USA” by Bruce Springsteen. It might seem like these are used illegally, because there are no musical credits in the game, but the album release that contains this game’s soundtrack (The Konamic Game Freaks) has the JASRAC label, indicating that they’re officially licensed. The non-pop music is pretty decent, too. Arcade games that tied into J-pop bands were just starting to be released – see Sega’s Teddy Boy Blues and Vic Tokai’s UFO Senshi Yoko-chan – but this was the first Japanese game to feature Western rockers, even if their usage wasn’t exactly authorized. 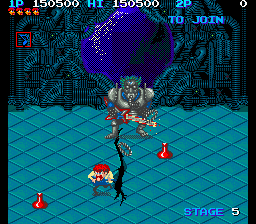 Rock ‘n Rage is such an oddity that it’s hard not to be fascinated by it, even though the core game is pretty standard. Its parody nature is probably why it’s remained buried in Konami’s archives, though, and never resurrected after its initial arcade release.