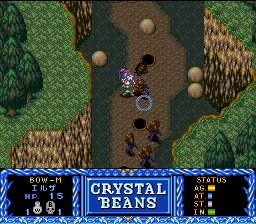 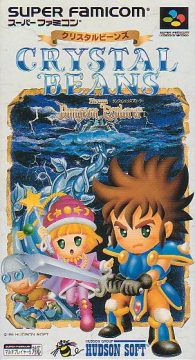 Crystal Beans From Dungeon Explorer, is kind of a port of Dungeon Explorer II for the Super Famicom, but heavily reworked. The intro has completely changed, for starters, which consists mostly of a text scroll. Some of the character classes have changed – they include Witch, Fighter, Warrior, Bow Master, Wizard, Priest, Monk and Kage (Ninja) – but all of the sprites have been redrawn to look more cartoony. The strange thing is, outside of a slightly brighter color palette, the rest of the graphics are almost exactly the same as the TG-16 version, and it’s easy to see how the styles clash. Most of the music consists of faithful renditions of the redbook music but done with the SNES sound chip, which actually sounds pretty decent, all things considering. 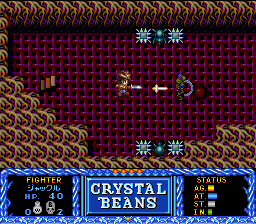 Many of the dungeons are the same, although sometimes they’re out of order, or removed entirely. They’re also a bit easier. The bosses are mostly all new, although there isn’t any dialogue before them like Dungeon Explorer II. The continuous overworld is gone as well, replaced with a menu-based world map. You need to walk around various towns and talk to people in order to unlock the next area.

The action is pretty similar, with some tweaks. Many of the magic spells have changed, requiring that you use several potions at once in order to cast a screen clearing spell, a la Golden Axe. There’s also a melee attack where your character twirls about. Many of the special items from Dungeon Explorer II have been removed. Multiplayer has been scaled back to three players too. Maybe this was all done as a quickie cash-in due to the popularity Secret of Mana / Seiken Densetsu 2?

Stupid name aside, Crystal Beans is actually still a pretty decent game, since the core of Dungeon Explorer II is still intact. But you also can’t help but shake the feeling that you’re playing a cut-down, inferior version. 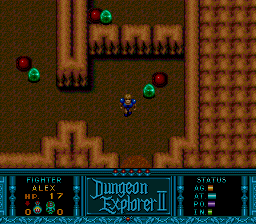 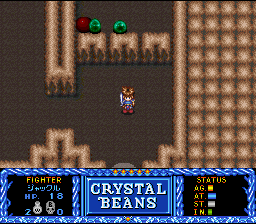