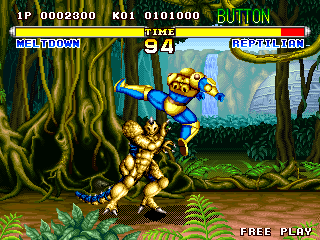 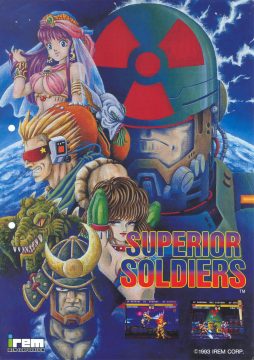 Street Fighter II changed the face of gaming on its release in 1991. Sure, it wasn’t the first game in its genre or even the first fighting game to become popular, but its perfect controls, beautiful visuals, iconic characters and depth that appealed to both casual and competitive players resulted in a game that revolutionized and cemented a genre. It was to fighting games what Doom would later be for first-person shooters. Of course, imitation is the greatest form of flattery, and post 1991 every half-competent arcade developer was jumping on the new fighting game craze for a piece of the delicious profits Capcom had made from Street Fighter II, running the gamete from games that took minor influences to shameless copies. Of those, only the outputs of SNK and Midway’s Mortal Kombat would survive past this era unscathed, but they were hardly the only developers who tried. Arguable the most notorious was Data East’s Fighters History, which is remembered mostly for being the game Capcom U.S.A unsuccessfully tried to sue over due to it plagiarizing Street Fighter II too closely. Konami was another developer who tried with Martial Champion, a game that mixed Street Fighter II with their own 3-button high, mid and low attack control scheme. Taito also tried with their own Kaiser Knuckle, a clone so wholly unoriginal that, much like Fighters History, one could write a short novel listing all it steals from other, more popular games. Even Sega-AM2, prior to kickstarting the 3D fighting game genre with Virtua Fighter, had their first stab at fighting game glory with the highly forgettable Burning Rival.

And then there was Irem, the famous arcade developers most well known for their popular shoot-em-up memorizers such as R-Type, X-Multiply, Image Fight and Dragon Breed who, with no prior fighting games under their belt, would jump headfirst onto the 2D fighter bandwagon in 1993. The end result would be the now totally obscure Sci-Fi themed fighter Superior Soldiers (aka Perfect Soldiers in Japan), their first and only attempt at the genre. Note this would also be one of the last games made by the company before their cataloged decline in the arcade space in 1994, with several staffers leaving to form Nazca Corporation who would later go onto create the beloved Metal Slug and Neo Turf Masters. It’s such a shame then that with such obvious talent behind the helm, the end results would end up to be such complete schlock. To be fair though, at least it’s perversely enjoyable schlock.

In the brutal post-apocalyptic future of Superior Soldiers, a form of space energy called “Force” has rained down on Earth in 1999, devastating the planet and killing 90% of the human race. In order to survive, the remaining 10% remodel themselves as cyborgs, mutants and evidently, scantily clad belly dancers, in order to fight it out for no apparent reason whatsoever. Like nearly all early fighting games, the plot is essentially non-existent and only serves as a flimsy excuse for the assorted weirdos to fight it out, but few fighting games have the dubious honor of having a cast as lame as this.

The main hero and a basic Shoto clone. If you know how to play as Ryu or Ken in SFII, you know Starsaber’s moves. Probably the least silly looking character in the roster.

A belly dancer from Saudi Arabia, clearly demonstrating the level of cultural understanding Irem had when making this. As a pretty obvious Chun-Li clone, Arabian Moon blatantly steals her Lightning Kicks and her fast speed. However she doesn’t fall to the level of complete ripoff by having her own unique arcing air-kick call the Moon Slash, as a replacement for the iconic Spinning Bird Kick.

Oh dear. Remember Radioactive Man from The Simpsons? Well, Meltdown is what happens when you design the same basic character for a fighting game without any hint of ironic self awareness. Despite how he looks though, Meltdown is actually a solid all-rounder with a variety of drop kicks, a strong command throw, a reliable Shoryuken and a ground-hitting machine-gun move that deals decent chip damage on block.

A dancer from Brazil. Her two main special moves are her dancing command throw, and a breakdancing spin attack that goes under normal fireballs like Starsaber’s.

An anthropomorphic reptile with human intelligence, Reptilian essentially plays like a command version of Blanka without the electricity. His Jet Attack allows him to barrel towards his opponent and clear low projectiles, while his fire breath can be aimed high, mid or low, making him a good counter to Cattydox.

A strangely non-futuristic samurai named after the Bushido code of honor. His two special moves are a ground-based fireball ala Terry Bogard’s Power Wave, and a sword lunge going from the top to bottom of the screen. If it isn’t obvious, his katana also makes Busido a relatively strong poke character.

A large, yellow mutant who’s both slow and floaty to control. Despite his appearance, Satinsect is firmly a poke character and not the Zangief-style grappler you would probably expect him to be. His only special move is a ground-stomp command throw that deals 30% damage, however he’s also helped by his dashing-strong punch which can get him over low projectiles. Arguably the hardest character to play as.

The stereotypical unfair final boss and the only character who can’t be player selected. His only two specials are to electrify himself as a counter, and the ability to shoot an R-Type ring laser that can eat other projectiles. The final twist is that in each ending it’s revealed that he’s actually a Bydo, giving this game its one solid connection to the R-Type series. 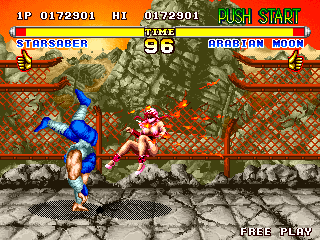 Not exactly the all-star cast. Now, it may seem petty to rail on the character designs so hard, but it’s honestly important as the characters in your fighting game basically serve to represent the entire game. Regardless if you agree, you know somethings gone horribly wrong when your game somehow has a cast worse than that of Galaxy Fight.

So the characters are a bust, but in their defense Irem at least managed to do a decent job on the mechanics front, as the engine in Superior Soldiers is surprising solid. The game uses the same 6-button, 3-punch & 3-kick layout established in Street Fighter II and its same loose system for command inputs in comparison to, say, the stricter system used in SNK’s earlier games. Unlike Street Fighter II though, players are also able to double-tap forward to run in and perform dash attacks, which for most of the characters are unique and adds to the fast pace nature of the game. Granted, it wasn’t the first fighting game to implement double-tap movements, as the previously released Art of Fighting games had it as well as the ability to back-dash, but for the time it was an uncommon inclusion. Add to that the tight feeling moves for the characters and the end result is a game that feels like an Capcom fighter with the pace and art style of an early SNK fighter, which if nothing else makes for a relatively unique and interesting blend.

Despite the redeeming qualities, this game still falls far from Irem’s typical golden standards. Now while the character designs, paltry roster and limited number of specials for certain characters are the most obvious problems Superior Soldiers suffers from, the truly worst aspect of the game can be found with the computer AI which is, in a word, miserable. Typically with fighting games the AI is based on having learnable patterns that after sufficient experience, can be recognized and sufficiently countered. In Superior Soldiers, the AI is instead designed to shamelessly read the player’s inputs such that, if the player performs a normal or special within the AI’s range, it will do the perfect counter-move 100% of the time. On top of that, the AI also has the frustrating habit of being overly defensive, and with the lack of any type of guard break mechanics, matches against the computer usually turn into a war of attrition and of who has the better normals. The other major flaw of the AI is that, for as easy as it is to be overly annoying, the fact that it so heavily reads inputs means there’s the unintended side effect of it being highly exploitable as well. For example, Starsaber and Busido can easily win certain matchups by simply throwing a light fireball from fullscreen which, if your opponent is sufficiently far enough away, will almost always cause the AI to jump forwards. Then, if you immediately follow up with a fierce punch or kick as they land, you can basically get a free hit every time. The only characters this doesn’t work reliably on are the faster characters like Arabian Moon and Cattydox, and also Skull Reaper whose R-Type laser beats all other projectiles. 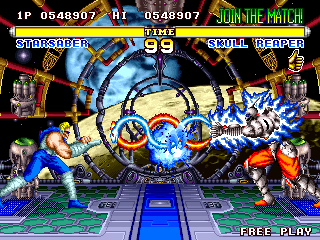 Much like the game mechanics, the visuals are also a mixed bag. Trashy designs aside, the character sprites are up to Irem’s standards with an impressive amount of animation for some of the characters and their moves. As proof, just look at Cattydox’s idle animations, Arabian Moon’s Lunatic Kick or Starsaber’s Force Cannon or Cyclone Kick. The backgrounds on the other hand, are noticeably less impressive. While they still share the same detailed and grungy artistry like the studio’s more famous earlier titles like Undercover Cops or In The Hunt, the gaudy color palettes and relatively limited background animations makes them less visually rich. Overall, the sprites are at least on-par or better than comparable NeoGeo fighters from 1993, but the backgrounds are decidedly worse.

And that’s Superior Soldiers, Irem’s take on the newly flourishing fighting game genre whose only notable impact would be to fade into complete obscurity, and on reflection the reasons are fairly self evident. 1993 was the year of such juggernaut releases as Super Street Fighter II, Fatal Fury Special and Samurai Shodown; games with deeper and more refined mechanics, extensive rosters featuring 12 to 16 characters, and with far stronger art directions. Superior Soldiers with its seven playable characters and several design problems seems anemic in comparison, such that it’s no wonder it never received the public attention that would warrant any ports or further updates. In fact, the only official re-release this game ever got was being included in DotEmu’s Irem Arcade Hits collection for Windows and MacOS, released back in 2011 which contained 17 other games from Irem’s arcade catalog. The great tragedy is that, for all its flaws, there’s still a decent game buried within Superior Soldiers that’s worth trying, so long as you don’t make the mistake of thinking it’s some lost fighting game masterpiece. At the very least it’s certainly better than Sega’s similar 32X disaster Cosmic Carnage, because at least the rounds don’t last so long that you’ll likely fall into a coma before finishing one. At its best, Superior Soldiers ranks up there with Survival Arts or Galaxy Fight as a trashy but fun fighting game that’s enjoyed best with friends and not taken too seriously. This is a game where a nuclear man can fight a reptile furry in front of the irradiated remains of the White House, after all.

In terms of regional differences, the changes made between the Japanese version are minimal. Apart from the game title and character names, the only major differences are that there’s a Japanese announcer that shouts the name of the game and the characters fighting in the versus screen in rather amusing Engrish, and that versus screens have character quotes pre and post match that weren’t translated for the worldwide release. 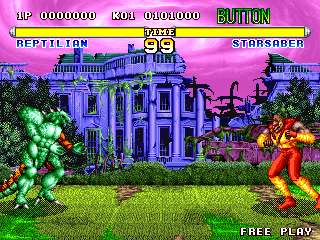 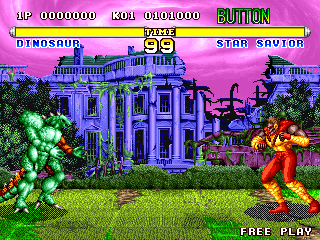