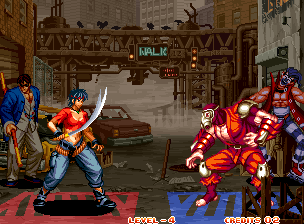 Savage Reign probably didn’t exactly set the arcade charts on fire. But SNK apparently had enough faith in the game to retool it a bit and create a sequel, known as Kizuna Encounter: Super Tag Battle. (“Kizuna” means “bonds” or “chains”. Lord knows how this makes sense.) But this time, they actually did a pretty decent job with it.

For starters, the plane jumping mechanic has been scrapped completely. Instead, you choose two characters at the select screen, and can switch them in and out during fights by hitting the D button. While this feature was prevalent in wrestling games, Kizuna Encounter was one of the first 2D fighters of its kind to use tag teaming, a good while before Capcom popularized it with X-Men vs Street Fighter. There are a couple of major differences that drastically change the way fights play out. You can only tag your partner by standing in a small, predesignated zone in the middle of the screen. This urges players to fight aggressively to corner foes and try to keep them out of the tag zone. Also, when one character runs out of life, they lose the entire match, regardless of how much health their partner has. This is similar to the much later Tekken Tag Tournament, and adds an extra layer of intensity and panic to switch fighters before getting creamed. 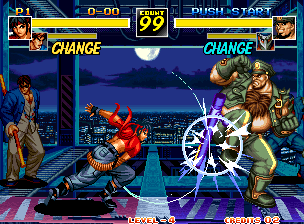 Other minor changes have been in the fighting system that work in its favor. Powerful attacks are executed by holding forward and hitting a button, rather than holding it down, and there are Samurai Shodown III/IV-style dodge and parry moves that make all of the fighters more agile, which is especially important when trying to make it to the tag zone. The silly “A+B” method of throwing weapons was removed, and all projectile attacks changed into standard controller motions.

The aesthetic design has also improved dramatically. The crappier characters – Carol and Nikola – have been dropped, and while the goofy Joker and Eagle are still in the cast, their lameness is balanced out by two awesome newcomers, Rosa and Kim. The final boss, a crow demon named Jyazu, is also far cooler than King Lion could ever hope to be. Savage Reign offered a strange variety of backgrounds, which ranged from brightly colored carnivals to dank factories. Kizuna Encounter is much more consistent, with fights taking place in dingy back alleys and deserted construction sites. While the scenery is arguably less detailed, the darker look lends to a post-apocalyptic atmosphere that feels much more suitable. The music, while still held back by some weak instrumentation, is much better overall, and includes the return the only good song from Savage Reign. All of these elements put together elevate Kizuna Encounter to a much more respectable status, and is definitely worth checking out. 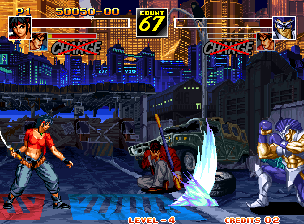 There was no Neo Geo CD version, so a completely new arranged soundtrack was created for the PlayStation 2 release. While the blazing guitars are pretty cool, they tend to overwhelm the main melody and percussion, and some of the synth instruments they chose for other tracks are kinda lame. Still, it’s great to hear full quality versions of these songs, and they sound great in game. This version also includes online play, but again, only in Japan.

As a side note, the European AES version of Kizuna Encounter is known as the most expensive officially produced video game ever made, with only approximately ten known to be in existence. It’s fetched over $10,000 in auctions.

In 2011, Kizuna Encounter was released digitally on the Wii Virtual Console, but only in Japan.