Metal Slug 3, The King of Fighters 2000 and Garou: Mark of the Wolves were the last three Neo Geo games made by the old SNK and they were all glorious send offs of classic series. Until SNK Playmore came into being shortly thereafter, the classic SNK franchises continued, but were handled by new/amalgamated development teams. Some of these groups fared great (Evoga for their work on Rage of the Dragons) and some of them fared not so great (Eolith on The King of Fighters 2001). 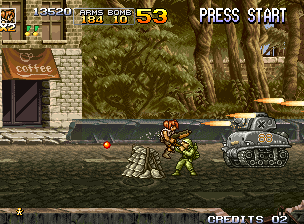 The Korean group Mega Enterprise handled the development of Metal Slug 4, which is basically the weakest of the main Metal Slug games. First off, Tarma and Eri have been replaced with Trevor Spacey (a gray-haired Korean) and Nadia Cassel (a French female soldier). Their moves and gameplay are basically identical, except Trevor stops moving for a split second during his melee attacks, which can get pretty annoying. If you look closely at certain animations, it seems like they’re just sprite edits of Tarma and Eri (who actually do appear in the background during a few scenes).

That leads into the game’s single biggest issue – huge parts of it are just recycled from previous Metal Slug games, with sections of levels being snagged from other games and nearly every single previous vehicle reappearing at some point. There are bosses that are little pieces of sprites from previous bosses and enemies grafted together. Not all of it is reused and the new artwork isn’t terrible, but it’s definitely below SNK/Nazca’s original work. It’s all massively uninspired, which is a shame considered it’s following the glory of the extravagant Metal Slug 3. Since Shinkiro had left for Capcom at this point, most of the character artwork is by Tonko, who had previously done some art from the console ports of the previous games. 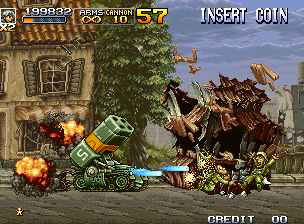 That said, there’s a new combo system for high scoring, which involves collecting medals. One of the only new weapon is the two-handed machine gun, which work slightly differently from the regular machine gun in that they’re more powerful, but cannot be used to spray fire diagonally. There are two different (comical) endings depending on if you can escape after beating the final boss. The button to jump out of slugs has been changed to the otherwise unused D button, a positive change since it was too easy to accidentally hit A & B (attack and jump) and ditch your vehicle when you didn’t mean to. The reused sprites also have the probably unintentional effect of making the game feel more like the older titles, as you have lots of enemy machinery and installations to destroy and a little less of the science fiction and biological enemies prevalent in Metal Slug 3. There’s no more aliens, and General Morden is generally nowhere to be seen. This time you’re facing off against an evil scientist named Amadeus who has created cyborgs and other machines to take over the world. But even this enemy is just a reworking of a previous NPC named Parker, who was meant to be a salesman for a Japanese video company (you can steal his briefcase at the beginning of Metal Slug 2.) When combined with his UFO, he also ends up looking a lot like Dr. Wily from Mega Man. 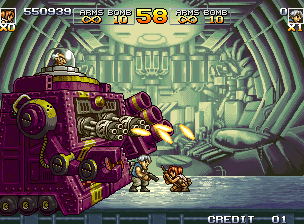 The only real standout element of Metal Slug 4 is the soundtrack. The music is a pretty big departure, as it sounds nothing like the previous games, aside from the “mission complete” jingle. It’s all composed by Toshikazu Tanaka, who also worked on other titles like Rage of the Dragons and Matrimelee, and has since become one of SNK’s most prolific and talented composers. It features a unique blend of guitar-based rock and synth orchestrations, most with very catchy melodies. 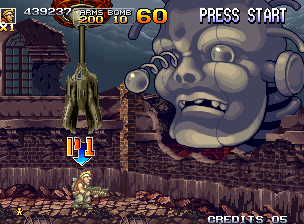 This received standalone releases for the PlayStation 2 and Xbox in Japan and Europe, and was bundled together along with Metal Slug 5 in the USA. Unfortunately, there really aren’t any additional modes, other than an option to collect trophies for certain achievements. The Korean PC release includes a bonus commercial featuring some Korean pop song, which is also included in MP3 format on the disc.