Metal Slug 6 is the first (and only) entry to run on the Atomiswave platform, leaving the old Neo Geo hardware behind – which, when this was released in 2006, was over fifteen years old. 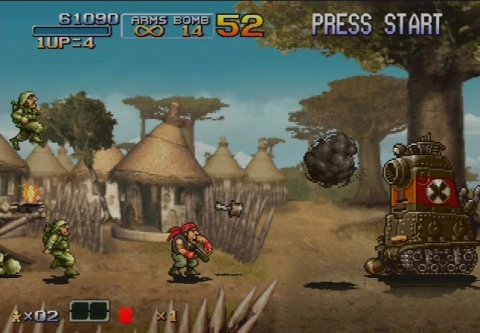 A first for this Metal Slug game is that the different playable characters have different attributes – Marco has a stronger pistol, Tarma is an expert at vehicular combat, Fio starts with a Heavy Machine Gun every time she dies, and Eri has double the amount of grenades, in addition the ability to toss them in every direction. And ever since the rebirth of SNK, the company has been very eager to please its fans (see: the entirety of The King of Fighters Maximum Impact 2 / 2006) – Ralf Steel and Clark Jones, also known as the Ikari Warriors, have been added as playable characters, bringing the total roster to six. Ralf can take two hits but has half the ammunition. He can also use his Vulcan Punch as an extremely powerful melee attack. Clark uses his Super Argentine Backbreaker suplex move, which renders him temporarily invincible and thus turns him into a close range killing machine. Additionally, all characters can now hold two weapons and can switch between them, much like Contra III – however, you still lose both of them when you die. There’s a single brand new weapon called the Zantestu, a short range sword that’s massively powerful. 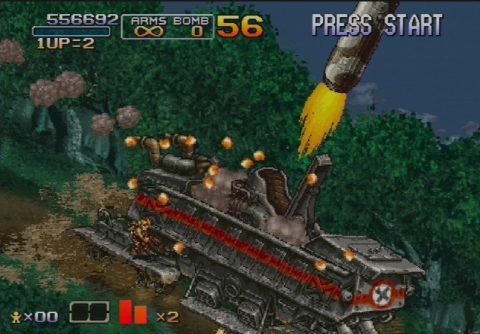 The move to the Atomiswave is a bit of a mixed bag – on one hard, it allows for some awesome effects, as the camera zooms out during certain boss battles (think Samurai Showdown or any other SNK game that used scaling), but the backgrounds are all high resolution, and possess a bland feel that pales compared to the pixel art of the earlier games. The color scheme of the previous games was always a bit muted, but here it just seems dreary. All of the objects now cast shadows, which it looks a bit strange when you first play it. The levels themselves aren’t anything special either – fight through a jungle, fight through urban China… it’s still a bit uninspired. The last level features a rather boring Dig Dug-esque section where you drill through the dirt, an area which should’ve been left on the cutting room floor. 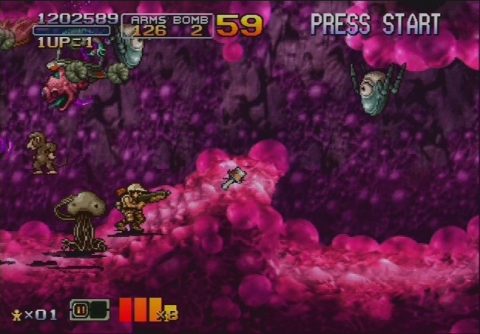 Thankfully the boss battles are much more inspired, especially the crazy robot with a dismembered brain in a tank. General Morden and the aliens are back, although this time everyone bands together to fight a new menace – a race of creatures living underneath the Earth’s crust. In one of the hidden paths, you can actually control the mother alien from Metal Slug 3 and rain destruction against the night sky. Like many much older games, playing on the easiest mode only lets you get close to the end of the game before getting a “please try harder mode” message. 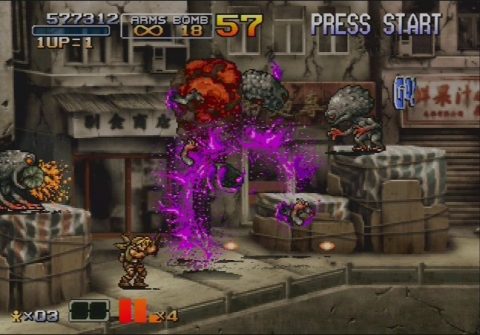 The soundtrack this time was (mostly) composed by Manabu Namiki, known for other arcade shooters like Battle Garegga and Dodonpachi Daioujou. While it uses some of the musical motifs from the earlier Metal Slug games, it has a very distinct feel that draws from many different genres, including an Asian/techno fusion for the China level, and a Hitoshi Sakimoto-esque orchestral piece in the fourth stage. 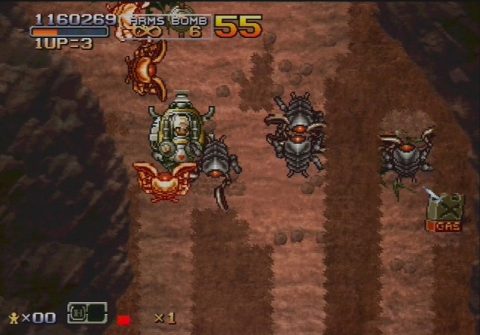 Metal Slug 6 got a standalone release for the PlayStation 2 in Japan. This version included a huge gallery, featuring tons of concept art yanked from the other home ports and full soundtracks for all seven games. Also included is the return of the the Combat School mode, this time with two new instructors – Mary and Lily. The only release outside of Japan was in the Metal Slug Anthology, which includes many of the same bonuses, but lacks the Combat School mode. The PSP version on this collection suffers compared to the other games, since its screen can’t handle the higher resolution the game was designed for, resulting in squished looking graphics. This is particularly noticeable on the status bars. Otherwise, it plays just about the same as the others on the collection. 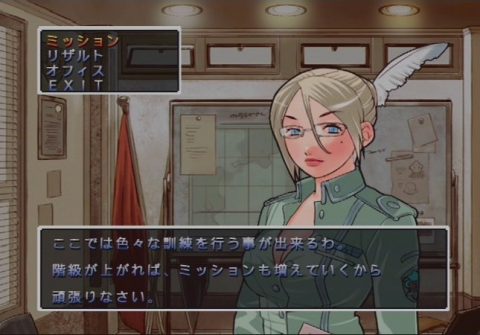