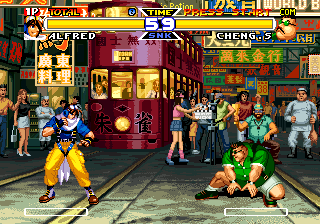 When it came 32-bit console ports of 2D fighting games, PlayStation owners usually got shafted with terrible conversions, often saddled with cut animations, awful load times, and in the worst instances, tons of slowdown. To make up for years of neglect, SNK released Real Bout Garou Densetsu: Dominated Mind (only in Japan), an enhanced port of Real Bout Fatal Fury Special. Despite the limitations of the hardware, Dominated Mind turned out to be quite excellent.

The basic gameplay is pretty much the same as Real Bout Special, with a few minor changes. The plane switching has been ditched entirely, and the destructible items at the sides of the stages have been removed as well. Some of the characters’ moves have been changed around a bit. The EX characters are gone, but some of their specials have been merged with the original characters’ move sets. Strangely, there are additional specials that must be unlocked by beating the game. Two new aspects have been added as well: Final Impacts, which let you cancel certain special moves into super moves, and Advance Guard, which is activated by hitting Forward and Triangle just when the opponent is about to attack, allowing to parry and get in close with an advantage. 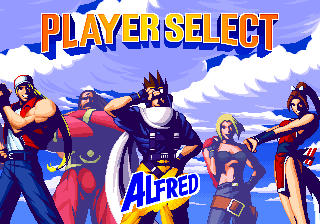 The big addition is that Alfred is now a playable character – he was initially introduced in Real Bout Fatal Fury 2 (which actually came out in the arcades before this game), but he was a hidden boss and unplayable without codes. The plot is again non-canon, but this time the final bad guy is White, a crazy guy based off Alex from The Clockwork Orange. He’s a crazy bloke with mind control powers – he has taken control of Billy Kane, who has to be fought before the final battle with White himself. White also has a particularly nasty trick – once he is finished off, he fires a projectile from lying on the ground. It has to be avoided to prevent instant defeat. White isn’t playable at all, unfortunately.

There are also a few new animated sequences. The intro shows Alfred flying his airplane, coming dangerously close to the Bogard brothers, who are sparring on the ground. It also shows action scenes of a few other characters, like Blue Mary, Mai and Joe, before it shows a fight between Terry and Alfred. This scene is pretty lame, but there are also two brief FMV scenes before the fights against Billy and White. There’s also a fully animated intro showing all of the characters partying, which is actually pretty cool. 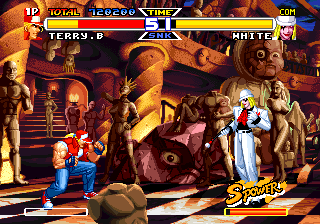 To put some more meat on the arcade game, Dominated Mind introduces a survival mode and a character information database that has artwork and background for all of the characters, amongst other bits of information. All around, it’s a really handy package – there’s still some cut animation and a bit of loading, but it’s monumentally better than most other SNK game PlayStation ports.

Also included with the initial release was a separate “fan disc.” Most of it is obnoxiously narrated by Mai. It’s similar to the one included with the Saturn version of Twinkle Star Sprites in that it includes a lot of fan artwork, as well as some live action cosplay of various characters. There’s also an “interview” mode where the Fatal Fury characters can be grilled about their likes, dislikes, and so on. You’re presented with a screen full of items, and need to select three to give to your interviewee so they’ll answer your questions. It’s all pretty stupid. Even more pointless is the “Duck King” dance mode, which has a 3D model of Duck King bust out different dance moves.