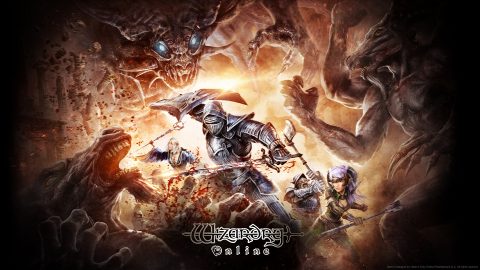 It was advertised as the ultimate MMO for hardcore role-playing gamers – going back to the unforgiving origins of Wizardry, brutal dungeon crawls with permadeath and fierce PvP combat were the mottos. Well, it turns out Wizardry Online is little other than the regular free to play MMO experience, first and foremost chock full with annoying mechanics geared towards luring players to keep sinking time and money into progress. But let’s have a look at the details.

Each account allows to create up to three characters with the typical Wizardry Renaissance races of humans, elves, dwarves, gnomes and porkul. Contrary to the established worldview, though, dwarves can only be male, and gnomes only female. The choice between the four core classes is free. Players are then dropped inside the town of Illfalo, which is the only base of operations for a long, long time. It’s later possible to get to the capital of the kingdom as well, but that requires a character level of 30, which is equivalent to several hundred hours of play. Illfalo is a great place to start an RPG though, with its several quarters, beautifully designed shop interiors and windmills and hot-air balloons in the background. It is a typical JRPG town, with static NPCs, most of which are shop owners of some kind, while others provide the player with quests. 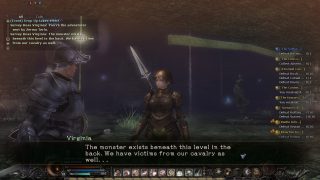 Talking with the town guard leads to a map, but it starts out with only one place to go. More dungeons are added very slowly by getting along with the story of the game. There are two types of quests in Wizardry Online: The unique adventures that further progression of this linear main storyline, and the missions, generic monster kill contracts, which can – and have to – be repeated countless times to grind for money, experience and Soul Points. 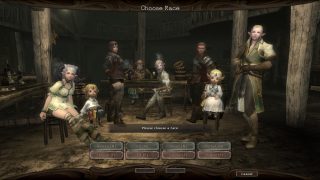 Starting with the race select screen, the atmosphere is very dense.

The Soul Point system is Wizardry Online‘s major peculiarity. Many aspects on the game – most importantly the ability to wear more powerful equipment – rely on a player’s Soul Rank instead of conventional character levels. For the first character, Soul Rank is usually the bottleneck for all progress, but up to three characters can be created sharing the same “Soul”, which means they share one pool of Soul Points and the same Soul Rank, which can give a major boost to the second and third character. Not only can they wear equipment early that would be far out of their reach otherwise, but there are many more bonuses that bring them up to speed quickly, like an increase of gained experience. Main story quests are also only played once throughout a “Soul”.

The much advertised perma death mechanics seem much more superficial in comparison. When a character dies, they have to return to an Angel Statue within the dungeon (which essentially serve as checkpoints). On the way back through the aetheral soul plane they are assaulted by Grim Reaper like creatures, but it’s also possible to warp back instantly at the cost of waiting time and equipment damage. The higher a character’s level and the more often they’ve been caught by one of these spectres, the lower is the percentage chance of revival. Hovewer, this starts out very high and it needs a lot of progress to ever get a truly risky deal. Even then, it’s always possible to sacrifice items or even money to raise the percentage. Should a character be ever turned to Ash, there still is a second chance before they are lost forever. Needless to say, it probably never happened to anyone. 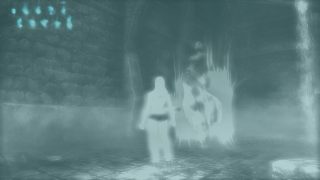 In an attempt to encourage player vs player gameplay, Wizardry Online also introduces a crime system. It’s possible to attack other characters at any time, kill them and steel their gear, but it turns the perpetrator into a criminal, which makes their eyes glow for everyone to see. The victim can then place a bounty on their head, and there is no penalty for killing a criminal. Guards attack them, too. Overall, the penalties to a life of crime are a bit harsh while the rewards are questionable, so not too many criminals are seen in the game.

The skill tree is a fairly typical modern RPG affair, where certain skills become available from certain levels, and unlock certain other skills further down the roots. The method has become so overused it’s rather trite, but at least the ability to change classes remains. The game launched rather miserably with only the four base classes, but the familiar prestige classes were introduced in early 2013. They only are accessible in the capital, though, so a lot of time has to be invested to ever get the chance to learn them, which is tied to a special promotion quest. 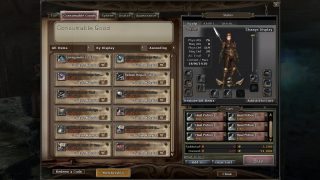 By talking to the town guards, players can get transported to the dungeons directly, which are picked from an overview map. Only one dungeon is available at the beginning, but more become unlocked by solving main quests and reaching higher character levels. Usually solving a dungeon and all the connected missions once is by no means enough to prepare for the next harder one, so much grinding is required. It wouldn’t be too bad if the dungeons weren’t also really boring. Most of them are fairly small and linear, and the few puzzles that are there feel more like pointless filler rather than a proper challenge. Traps are simply triggers on the floor, which can only be avoided but never disarmed, and keep triggering each time someone walks over them. Some dungeons have heavy doors that have to be pushed open in a slow and pointless process, just to steal some more time from the player. 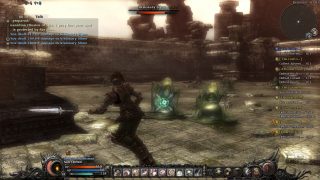 No Wizardry without gelatinous blobs.

Even the monsters don’t have too much to offer. Aside from the four-armed demons which are introduced and hyped up in the very beginning, only to be not seen again for the next few hundred hours, it’s mostly the typical fantasy RPG cast. The few interesting creatures are eventually made boring by constant repetition with palette swaps. All the dungeons contain statues that lead to “boss fights”, but almost all of the models are later seen as ordinary enemies, too. There are also some gates to more impressive special bosses which require piecing together orbs from broken shards, but even though some of them can be accessed almost immediately, they’re so ridiculously powerful they can only be considered end-game content, so there’s really no point in dangling them in front of the player’s head like carrots that early on. 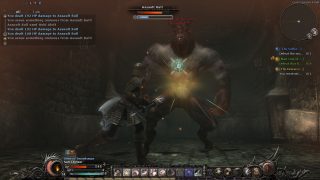 The game is meant to be played in parties of four, although as a warrior it’s still feasible to go solo for the first 10-or-so dungeons. Whether fighting alone or in a group, the combat is always hectic and hard to keep under control. It’s possible to lock onto one enemy, but when monsters start ganging up, changing targets becomes unreliable. It’s made worse by a viciously bad camera, which is either much too close to the player to allow a decent overview or tends to get into conflict with dungeon walls. The game does allow to zoom into a quasi-first person perspective, but combat is almost impossible from there, as the camera doesn’t actually point in the direction the character would be looking at. 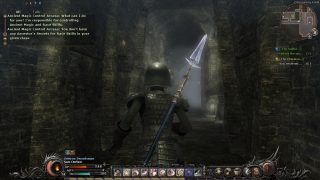 As any MMORPG, of course Wizardry Online also needs a hundred crafting systems to keep long-time players occupied. Crafting stuff usually is fairly self-contained and linear, with no really meaningful choices, only high requirements for ingredients and mostly money to buy upgrades. Improvements can also fail and destroy the items, further increasing the incentive to shell out real money to secure success on higher levels.

The problems with Wizardry Online all stem from being a free-to-play MMO. The difficulty is only the kind that requires too much patience or a bit of cash, the amount of repetitiveness soon becomes unbearable, the supposed “hardcore” elements are meaningless in practice, and nothing in the world and story feels like it has any weight to it. Since it also neglects most core pillars of the Wizardry spirit (the tactical turn-based combat, the first person dungeon exploration), anyone who’s interested in the concept is better served by trying out the Dark Souls series, who is a much more fitting approximation of what Wizardry as an action-RPG with online components should look like. 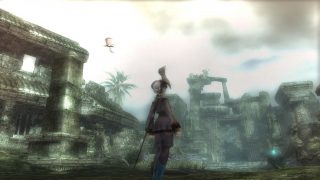 In Japan, Wizardry Online was opened on October 14, 2011 and enjoys reasonable popularity in its home country, presumably thanks to the pull of the Wizardry name. Service for a localized English client started on January 31, 2013, but the International version was struggling from the beginning. The servers were never really well-populated, and publisher Sony was too slow in bringing over the added content from Japan to the rather bare-bones core game. Western players never got to lay hands on the ranged weapons that were introduced in Japan in January 2014, for example. The English service was shut down on July 31, 2014. The game remains active in Japan, and a Russian version is available as well.