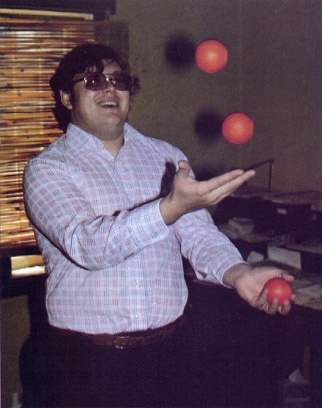 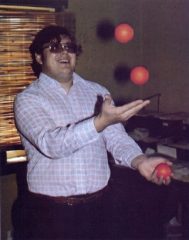 Robert Woodhead is headed into zero-gravity, and he’s bringing his camera. The Wizardry co-creator will climb aboard an aircraft and perform a series of deep dives creating 25 second windows of weightlessness, during which he’ll be using a high speed camera to photograph water floating in midair. “I’m doing some simple physics experiments in zero gravity,” says the quiet voice on the other end of the phone, “hoping to make a science film for elementary school classrooms.”

Excursions into the upper atmosphere are just the latest in a series of post-programming pursuits. Woodhead has kept very busy in the years since he helped mold the face of personal computing and video game design. “Apart from being a stay-at-home ‘mom’ and running a Japanese film business, I keep up with a lot of little things.” That Japanese film business is Animeigo, a family-run media import company. A few years ago he was building battle robots with his children. Before that he was living in Japan creating the prototype for what could have become the first modern MMORPG. And although he doesn’t create gaming software anymore, he still plays games, especially EVE Online. “It’s by far the most socially deep game out there,” says Woodhead. “I serve on the Eve Council of Stellar Management, and fly to Iceland every now and then to yell at the developers.”

Back in 1976, Robert Woodhead was a seventeen-year-old college student with a love for D&D and access to the PLATO network. “Cornell has two terminals connected into PLATO,” he explains. “PLATO was hugely influential, everything everybody loves about the internet was pretty much invented there. There were several dungeon crawlers on PLATO, and I was a huge D&D pen and paper fan. I wanted to know if these experiences could be translated.”

After some initial work on PLATO, Woodhead turned his focus to the new microcomputers. “I started working on a game called Paladin, inspired by PLATO dungeon games. I was interested to see how much you could pack into 1MHz. I wanted to know how close I could come to the PLATO experience on limited hardware. The Apple II was a tiny and crippled machine by today’s standards.” Despite the Apple II’s limitations, Woodhead soon fell in love with the device. “It could do anything you wanted it to do,” says Woodhead. “It has sophistication, but it was so simple that you could keep in your mind everything you needed to know about that machine. You could look at a problem and get a pretty good idea of what the Apple II could do with it.”

His efforts soon led him into accidental contact with fellow PLATO user Andrew Greenberg, who was working on a similar project. The two combined their efforts and began creating a game that reflected the Dungeon-crawling experience of pen and paper RPGs with remarkably fidelity. The game included a party of several distinct characters, a first for computer games. Traps, riddles, puzzles, mazes, class changes and alignment dynamics all made the transition from Dungeons & Dragons to the program, which the two men entitled Wizardry: Proving Grounds of the Mad Overlord. Greenberg reversed his first name and became Werdna, the evil wizard at the bottom of the dungeon. Robert used the anagram Trebor and played the royal sponsor of the player’s expedition. There was little in-game story, but a great deal of faithfulness to the feel of tabletop gaming. 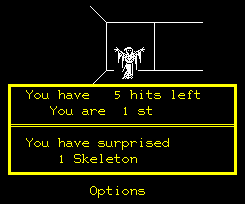 Oubliette, one of the games that inspired Wizardry

The first hints of Wizardry‘s potential for popularity came when a test scenario called Dungeons of Despair was shown to computer enthusiasts. “It was about three months before the Wizardry release, and we demo’d at the first Boston Applefest. People wanted to buy Dungeons of Despair even though it was an unbalanced beta. They were paying $35 dollars for them and we sold out… we had to go back to the hotel and make more copies.” Wizardry went on sale soon after and exploded. “We sold more copies of Wizardry in the first month than we expected to ever see. People wanted a sequel so we did two sequels.” Both sold very well, and were ported across a myriad of platforms.

“After that point I didn’t want to do more of the same. Wizardry 2 and 3 were more evolutionary than revolutionary.” Greenberg and Woodhead tried an original approach in Wizardry IV, largely inspired by a new team member. “I met Roe Adams when he was a reviewer for Softalk, IIRC magazine. He handled all the design, and the basic idea for the game was his. We did multiple endings and a 3D maze that was kind of cute from a programming perspective. Since you start as the evil wizard at the bottom level, Wizardry players sent in disks with their characters to act as enemies. We received hundreds of disks, which resulted in some players having the experience of killing their own parties after the product shipped. I’d say we used 40-50 complete parties from players.”

Wizardry IV was delayed, largely a result of building a new code base. “For about a year I was telling everybody it would be ready next week, and I kept telling everybody the same thing the next week. It just dragged on.” While the project was released well behind schedule, it was a point of pride for Woodhead. “I only worked on the first four games,” he explains. “Each of the games has something to recommend it, but my favorites would either be number one which was the most fun to work on, or number four, which flipped around the player characters and monsters too create something incredibly difficult but very fair.” Wizardry IV‘s challenge was born out of an extensive development cycle which according to Woodhead included a heavy focus on quality assurance. “We did a lot of play testing to make sure puzzles were fair and had logical answers, but could still be misleading.” 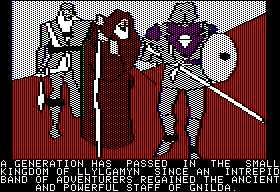 Wizardry III on the Apple II not only introduced
the iconic window interface, but also featured
an illustrated intro

Wizardry IV was delayed, largely a result of building a new code base. “For about a year I was telling everybody it would be ready next week, and I kept telling everybody the same thing the next week. It just dragged on.” While the project was released well behind schedule, it was a point of pride for Woodhead. “I only worked on the first four games,” he explains. “Each of the games has something to recommend it, but my favorites would either be number one which was the most fun to work on, or number four, which flipped around the player characters and monsters too create something incredibly difficult but very fair.” Wizardry IV‘s challenge was born out of an extensive development cycle which according to Woodhead included a heavy focus on quality assurance. “We did a lot of play testing to make sure puzzles were fair and had logical answers, but could still be misleading.”

The Wizardry games were popular internationally, and there was a demand for translations and adaptations to local computing standards. This was especially true in Japan, where Woodhead traveled and helped port Wizardry IV to Japanese PCs using custom built virtual machines. “Some talented Japanese programmers built USCD p-Machine virtual machines for the various computers we supported, while I worked on localization code, wrote software for data file conversion, and created search & replace functions to port to different languages. Wizardry IV was actually written on a NEC PC-9801 that, after a little “wizardry,” thought it was an Apple II.”

During the era of Wizardry‘s greatest domestic popularity, Woodhead’s main role in the company was as a programmer. He found delight in stretching the limited abilities of the Apple II. I asked him what moment he remembered most fondly from his time on Wizardry. “I had an idea for taking the original games and implementing a windows system for the interface, similar to Apple’s Lisa. It was a Friday afternoon at home when I got an idea in my head for how I might be able to manipulate the Apple into doing it. By Saturday I knew it would work, and by Monday afternoon it was finished. I didn’t sleep, all weekend. The work was interesting and I didn’t notice the time. I was afraid if I stopped I might forget how I planned to make it work. On Tuesday morning I came into the office and showed everybody. I called it “Window Wizardry”, and if I remember right we slotted it into re-releases and distributed it to anybody who wanted to exchange it for their original disk.” 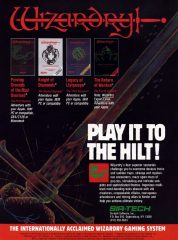 After Wizardry IV, Woodhead found himself drawn toward other pursuits. He decided to leave Sir-Tech in 1988, and soon became interested in a Japanese experiment to create a huge, online multiplayer roleplaying game. “It was an MMO,” says Woodhead. “The working name was Sunday. I returned to Japan and worked on it for two years, really because I was chasing a girl.”

“The project ran out of money, but I married the girl. The Japanese economy collapsed after two years, and the money dried up.” Woodhead shrugs it off. “I’m sad the project never went the way I wanted it to go, but I’m not sad because it was interesting. It worked out all right,” he says.

Had the project gone forward, we might call Robert Woodhead the father of the modern MMO rather than Richard Garriott. Instead, Woodhead stepped away from games and moved on to build a family and find other avenues for his inventive nature. “Can you slink a slinky in zero-G?”, he asks. He’ll find out next week on his research flight with Go Zero G.

The art direction in the latest
episodes is very Japanese

Considering his prominent place in gaming history, Woodhead comes across especially humble. “Wizardry was just one game in a continuum that starts back in the early seventies. We added a twist, and inspired others in turn… For bizarre reasons it succeeded and allowed me to pursue various projects and disasters, things I find interesting and that add something to the 401K. But if it hadn’t I still would have done it.”