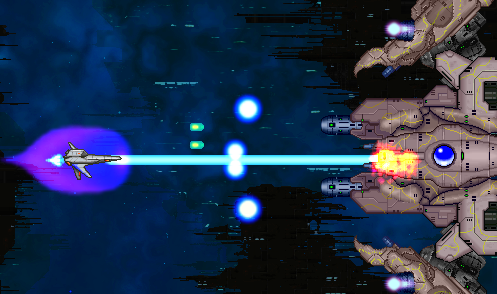 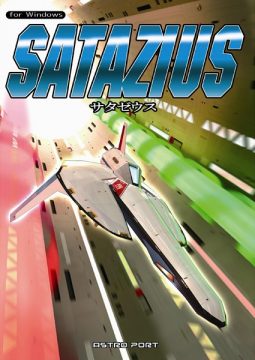 Astro Port, the guys behind shooters like Gigantic Army, Armed Seven, and Supercharged Robot Vulkaiser, must really want a job at Konami. Satazius, a side-scrolling shooter, may as well be an interactive resume in hopes to create the next Gradius game. And yet even though its homages are instantly recognizable to anyone familiar with Konami’s series, it draws widely from the canon of other shooters to create something that’s only slightly like the games it derives from. 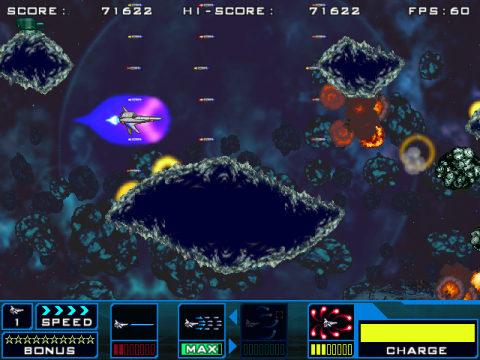 The weapon selection screen looks an awful lot like Gradius, even though the actual upgrade system really isn’t. You select a main weapon (including standard bullets, lasers, and explosive shots), two secondary weapons (which generally fire in multiple directions, including Darius-type missiles and a Thunder Force-style homing weapon, and which can be switched between at any time), and a “charge” weapon that’s extremely powerful but, as expected, comes in limited quantities and must be charged for a period of time before it can be used again.

Similar to Axelay, about half the weapons are locked from the outset – you can re-equip your ship after each stage (or each Game Over), where you’ll find that a new weapon has opened up. There are no Options in the traditional Gradius sense, although one of the secondary weapons causes a handful of orbs to rotate around your ship and fire continuously.

The power-up system draws more from Darius than anything. Each of your three weapons, as well as your shield and your speed, is powered by grabbing a colored orb. As you continue to grab orbs, you’ll further strengthen each system and carry it throughout the game, though they drop a few levels every time you die. Power-ups are common, however, and unlike Gradius you’ll rarely find yourself in an underpowered position. Each level also has bonus stars, which are totaled up at the end of each stage for bonus points.  You lose all of these if you’re killed, although they do reappear to collect upon respawning.

Most level types should seem familiar to Gradius players. There’s a level filled with rock formations, which turn into volcanoes and spew bits of magma. There’s a high speed zone, although it’s less cruel than they usually are. One area has bits of the ceiling and floor tiles flying towards you. There’s a boss rush near the end, and the final stage has bits of the floors and ceilings that shift around. 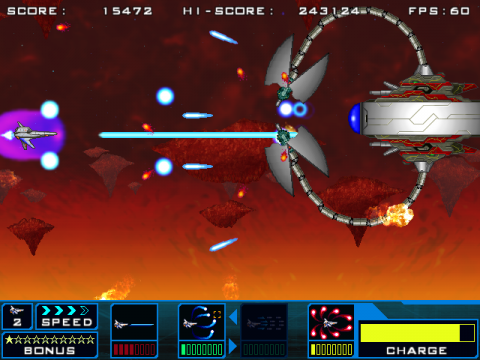 Most enemies are nostalgic, right down to the two-legged walkers and orbs that apparate in great numbers out of thin air, and the bosses come complete with a guarded core that must be destroyed, although strangely they don’t change color as they’re damaged. You’re also chased through a cave by a much larger starship near the end of the first stage, likely an homage to the opening stage of Gradius: The Interstellar Assault, although handled much better here. The final boss looks like the one in Axelay. There are even a few tiny rings of rotating satellites, similar to the one in the first stage of R-Type.

Satazius is in a weird spot, as it looks like Gradius and was obviously inspired by it, but doesn’t really feel a lot like it. Your ship is way more powerful, both from an offensive and defensive position Your Charge weapon can kill most bosses in one or two shots, and the pacing is much faster, with quicker scrolling and generally more bullets on screen. Although the Normal difficulty mode is relatively easy compared to other shooters, especially with the nine continues you’re given, it’s also balanced well enough so it’s rarely boring.

While it plays well, Satazius suffers from the same issues as most fan games – it duplicates its inspirations pretty well, and even manages to not feel like a complete clone, instead attempting to fix the elements that the developers didn’t care for. But in retooling the gameplay, it doesn’t feel like much of an improvement. Gradius V, for example, changed a lot of core mechanics, but replaced them with Option manipulation. Satazius makes no such interesting additions. 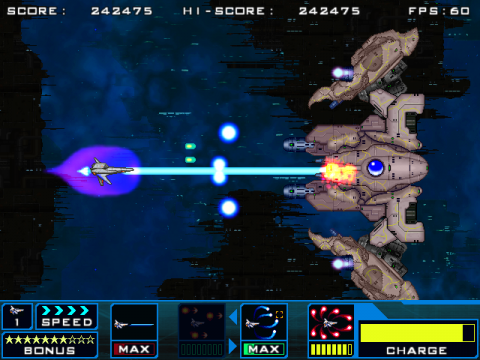 The 640×480 pixel graphics are just a bit too clean, although the backgrounds are nicer than the usual black “outer space” that tend to permeate the average Gradius game. It’s not without creativity though. Astro Port’s take on the “giant multi-legged walker thing”, a monstrosity with parts that spread into the background and has a huge human eye in the middle, is easily as cool as anything Konami has ever done. The thumping techno soundtrack is alright, too, though it ultimately lacks personality. While not quite a top-tier classic, it’s a nice alternative to cutesy moe bullet hell shooters, and is still a recommended diversion.

Initially released through doujin channels in Japan, Satazius is available worldwide on Steam for a cheap price, published by Nyu Media and Capcom.