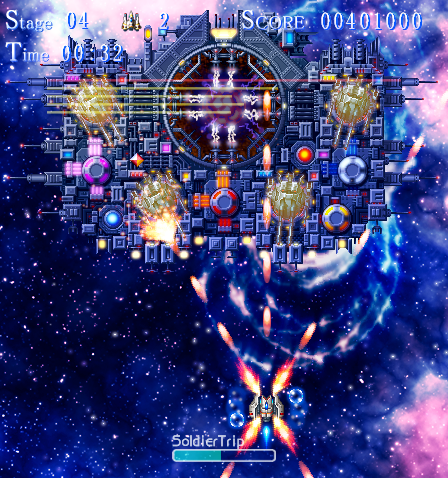 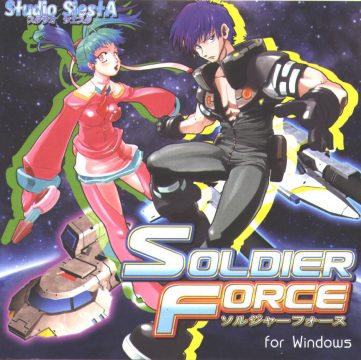 In 2003, Hudson released a 2.5D remake of it for the PlayStation 2, PlayStation Portable and GameCube (the series also included upgraded versions of Adventure Island, Lode Runner and Bonk’s Adventure.) Apparently not content with this, Studio SiestA, a doujin studio mostly known for the side scrolling shooter Air Rade (and later known for the similarly themed Trouble Witches) took it upon themselves to make their own remake of Star Soldier. And this is Soldier Force.

Soldier Force sticks much closer to the source material than Hudson’s own remake. Outside of some stunning well rendered 3D models depicting your ships on the selection screen, all of the graphics are 2D, and not particularly high tech 2D at that. The levels are all pretty much the same – you fly over construction sites and other bits of scenery floating in outer space, shooting up the myriad waves of bad guys. There’s not much variation in the scenery, and there are only two bosses that repeat over and over again. There are two ships. One, the Caesar, is from Star Soldier, piloted by the blue haired dude as seen on the cover of the Famicom version of Star Soldier. The other, the Noah, piloted by some girl, is actually the Enterprise-shaped ship from Starship Hector. 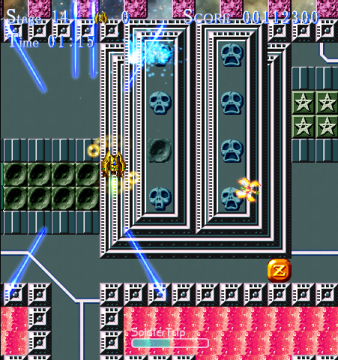 The Caesar has the standard gun that evolves into a multi-directional shot once powered up enough, as well as a focused laser attack you can switch to. The Noah offers shots that can be repositioned to fire in any direction. You can also fly underneath the scenery, which renders you invulernable to enemy attack, but you can’t attack either. (Two more ships, introduced in a patch, are the Golden Humming and Final Star SS, the latter hailing from Star Force, the predecessor to the Star Soldier games.) Also new to Soldier Force is the SoldierTrip gauge at the bottom of the screen. It fills up as you destroy enemies – if you activate it, you’ll automatically reach full weapon power. This is handy, because you take an extra hit or two when you’ve have the strongest weapons, so it basically acts as a bonus shield if you use it right. If you’re already at full power when you activate the SoldierTrip, you’ll temporarily enter a bonus mode where each enemy will drop a score orb, furthering increasing your total points.

The big catch with Star Soldier is that it popularized the score attack theme that many of its sequels focused on. Shooting bad guys isn’t that hard, but the landscape is littered with destructible blocks, and destroying them all requires flying back and forth, showering the screen with shots. The later games introduced the Caravan modes, played in bursts of either two or five minutes, which primarily focused on obtaining the largest score possible. It’s no surprise that this is where Soldier Force is the strongest. There are no less than fourteen different Caravan maps, offering a whole slew of challenges. The standard arcade game is a bit straightforward and thus a bit dull, but the Caravan modes are infinitely more interesting.

Even though the graphics are a bit underwhelming, a tremendous amount of effort was put into the soundtrack. It’s filled with arranged tunes from all throughout the Star Soldier series, including a few tracks each from Star Soldier, Starship Hector, Gunhed (AKA Blazing Lazers), Super Star Soldier, Soldier Blade, and Final Soldier. The arrangements themselves are pretty standard, but the fact that they’re there to begin with shows how much love went into this indie project.