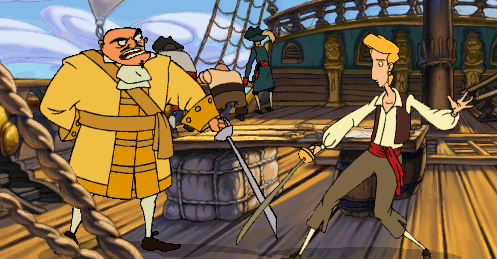 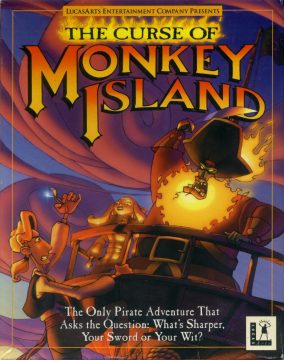 Monkey Island 2 ended somewhat confusingly, and so the third game begins on a similarly baffling note. Guybrush is floating throughout the sea, apparently having escaped from LeChuck’s “Carnival of the Damned”, with little memory of the events at the end of the last game. With an outstanding sense of luck, Guybrush happens upon LeChuck, who’s now a demon with a flaming beard, engaged in ship-to-ship combat with Elaine Marley near Plunder Island. Guybrush helps sink LeChuck’s crew and finds a gorgeous looking ring in LeChuck’s treasure hold. He gives it to his sweetheart, who graciously accepts, both unaware that the ring is cursed, and will turn anyone who wears it to gold. Guybrush sets off to explore Plunder Island and its fearsome Puerto Pollo, named after the ravenous (not really) chickens that infest the area. During his search through the Caribbean for a cure, LeChuck is still after Guybrush, and he must once again face off with him at the end. 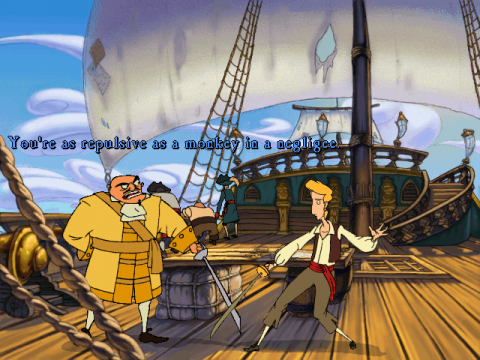 While Ron Gilbert had since left LucasArts by the time The Curse of Monkey Island was in development, the reins were handed over to Jonathan Ackley and Larry Ahern, who had previously worked on other LucasArts games like Maniac Mansion: Day of the Tentacle and Sam & Max Hit the Road. Ahern also serves as art director, with veteran Bill Tiller working on the backgrounds. And it’s an outstandingly fantastic looking and sounding game.

Much technological progress had been made between the second and third Monkey Island games. This is the first of the series to be developed explicitly for CD, utilizing full voiced dialogue, SVGA graphics, and full motion video cutscenes. The backgrounds are gorgeously drawn, but the real standout is the character artwork. It’s all scanned from illustrated cels, with a distinctly goofy art style that might vaguely recall Looney Tunes and occasionally a bit of Matt Groening but stands completely on its own. Guybrush is tall, lanky, with eyes spread a bit too far apart, and looks a bit like his rendition in the first game, clean shaven with a white shirt. The sprites are huge and perfectly animated, although Guybrush’s sprite does pixellate as he scales back and forth on the scenery, which does slightly shatter the otherwise brilliant magic of the visuals. The full motion cutscenes are good enough to appear in a professionally animated movie – it’s that good. 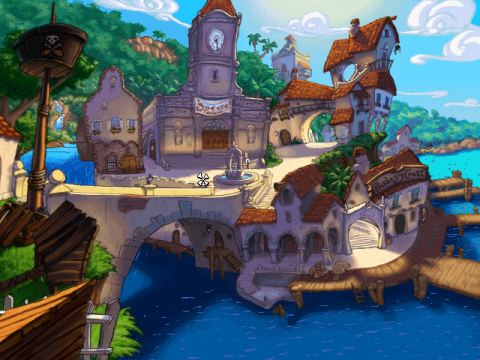 The voice acting, too, is spot on. Dominic Armato provides a perfect Guybrush (he’s a self professed Monkey Island fanboy), while Earl Boen sneers wonderfully as LeChuck, and Alexandra Boyd gives Elaine Marley a charming British accent. All of the secondary characters are just as inspired, with even famed child star Gary Coleman playing a small role. The change in art style and the addition of voiced dialogue does lend for a more cartoonish feel than its predecessors. Primarily, Guybrush takes on a bit more personality than before, where he previously was a cipher who had a sarcastic sense of humor if you wanted him to. Here, he’s more expressive, more involved, a bit more inept and still somewhat naive, while a bit less snarky. There’s also a lot more dialogue in this one, and all of it is both splendidly written and voiced.

Naturally, The Curse of Monkey Island features a delightfully deranged set of characters, including Murray the talking skull, who has delusions of world conquest despite not having a body; the deranged pirate Mr. Fossey and his crew of not-so-faithful monkeys; Slappy Cromwell, who has edited all of Shakespeare’s works into a forty-five minute production called ‘Speare!; Kenny, a young entrepreneur who tries to trick customers at his lemonade stand with his bottomless mug policy (the mug, in fact, has no bottom); and a trio of retired pirates who have given up the life at sea in order to run a barbershop, one of whom is violently Scottish and is voiced by Alan Young, the voice behind Scrooge McDuck. There’s also a number of returning characters, including Stan, who’s still stuck in the coffin from the last game and takes up selling life insurance, and Wally the cartographer, who has somehow convinced himself that he’s a bloodthirsty pirate despite his diminutive stature and general nebbishness. You’ll also run into the Voodoo Lady, who serves the same purpose as she always has and simply doles out advice. 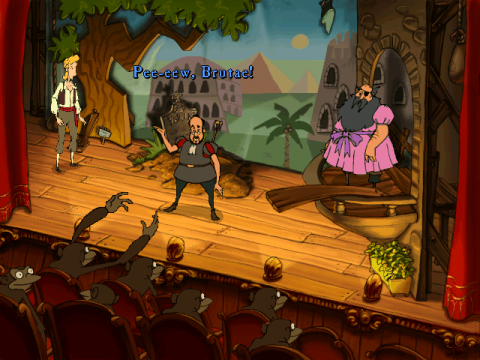 There’s a situation where you get swallowed by a huge snake, where useful items (like high-fiber cereal) lie just outside your reach, just like the part in the first game where you’re tossed into the ocean with the idol, surrounded by potential escape tools. In one of the final areas, you even need to recreate an important item from earlier in the game – a hangover cure – similar to how you made another voodoo doll to defeat LeChuck at the end of the second game. There are even allusions to single lines from the older games, including references to a barber named Dominique (the code word Guybrush gives to the shifty man on Mêlée Island) and claiming to be a flooring inspector (the lookout’s opinion on Guybrush when he first meets him). You even find a skeleton in a bar with a pin that reads “Ask me about Grim Fandango”, like the pirate and his blatantly self-promotional Loom speech from the first game. It also goes so far as to reference the old stump joke. When Guybrush sticks his head through a hole and emerges out of the stump, he peers into the original background straight from the VGA release. (Meanwhile, Guybrush is still his high res cartoony self.) Guybrush comments on a herd of stunningly well rendered jaguars, which are just outside of the player’s view, and then ducks back in.

If there’s one aspect that feels uncomfortable, it’s how the story deals with the events at the end of the second game. The Curse of Monkey Island acknowledges that many people were disappointed in the ending, going to great lengths to try to explain everything. That’s undoubtedly a necessity, but since Gilbert was not involved in this game, it’s obvious that the new directors were trying to dig themselves out of the hole that their predecessor dug for them, and it feels like they’re straining themselves. 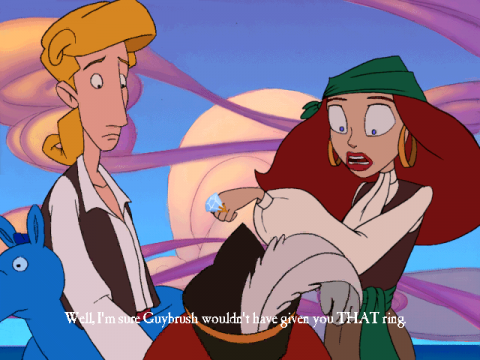 Once again, there are two difficulty settings: a standard mode, and “Mega-Monkey”, which includes even more ridiculous and bizarre puzzles. These are often quite ludicrous and bordering on impossible to figure out, even more so than any other LucasArts games. During a search for a piece of gold, you realize that a pirate has a gold tooth. In the regular difficulty setting, you just need to give him a piece of bubblegum, which dislodges the tooth, pop it the gum bubble, and take it. Simple enough. In Mega-Monkey mode, the pirate will realize his tooth fell out and won’t let you leave with it, so you need to concoct a bizarre scheme by airlifting the tooth out of the room with a series of balloons. At another point, you need to trick a certain man into thinking he’s a relative of yours. He drops the hint that he often looks at the paintings of his ancestors and reminisces. So, you need to rip out one of the portraits, stick it on a door, tear out the face, and stick in your head in from the window on the other side, somehow convincing him that you fit in the rest of his family. 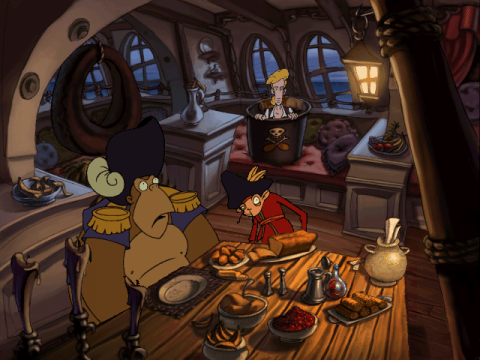 Still, like its ridiculous brethren in the Maniac Mansion and Sam and Max games, the puzzles might be frustrating, but at least they’re funny. You get to fake your own death at least twice, catapult a corpse into a crypt, impersonate a gigantic ravenous chicken known as El Pollo Diablo, infuriate a lactose intolerant volcano god, play a game of dueling banjos, and attempt to join a barbershop quarter using a series of spectacularly off-tune (but hilarious) songs. (“Ohhh… there’s… a… monkey in my pocket and he’s stealing all my change. His stare is blank and glassy, I suspect that he’s deraaaanged!”) The whole third chapter features the return of the insult sword fights, and they work pretty much the same way as they used to, right down to the special insults thrown by your ultimate enemy, Captain Rottingham. The only difference is that the comebacks now rhyme with the insults. For example:

Insult: You’re as repulsive as a monkey in a negligee!

The nonsense comebacks you can make Guybrush utter when you don’t know the right ones are pretty comical too. It’s all framed in a ship-to-ship cannon combat minigame, an element which was originally planned for the first game but ended up on the cutting room floor. You control the ship from an overhead perspective as you try to maneuver around your opponent and blast them with your cannons. It’s not terribly fun, but it can be greatly simplified if you find yourself sick of it. 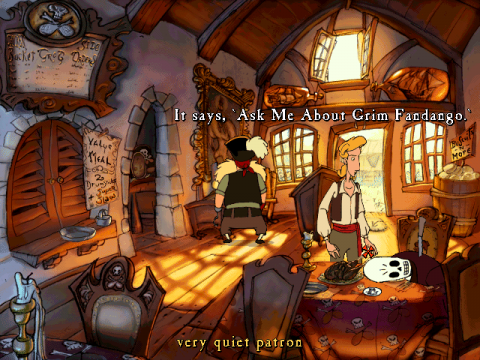 While some hardcore fans of the older games have found its movement towards cartoony graphics and humor somewhat off-putting, that certainly shouldn’t stop anyone from playing it. The Curse of Monkey Island is one of the funniest, best looking, best sounding adventure games in the genre, and, along with the rest of the series, is absolutely essential.