The Legend of Robin Hood: Conquests of the Longbow - DOS, Amiga (1991) 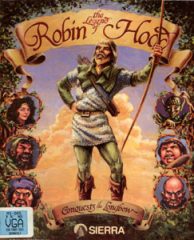 Some parts of the first game referred to it as “Conquests of Camelot I”, implying that a sequel would focus again on King Arthur, or at least the Knights of the Round. Instead, Marx and company went a different route and jumped several centuries forward from Arthurian times, basing their second (and final) game on Robin Hood.

Most people are familiar with the basics of Robin Hood – while King Richard is off fighting the crusaders, the corrupt Prince John and his notorious right-hand man, the Sheriff of Nottingham, are unfairly ruling over the people the England. The outlaw by the name of Robin Hood, along with his faithful band of Merry Men, are devoted to robbing the rich, giving to the poor, and working in favor of the general populace while fighting against a cruel government. Here, King Richard has been captured during his adventures and held hostage by King Leopold of Austria. The Queen is working to pay this ransom, but naturally, Prince John is diverting the funds for his own uses, so it’s up to Robin, with the aid of his gang and the lovely Maid Marian, to ensure the king’s safe return.

The adventure consists of thirteen “days”, which all focus around Sherwood Forest and the city of Nottingham. You must complete certain quests during each day in order to proceed, although a vast majority of them are fairly brief, and just involve accosting various travelers and finding new disguises. The rest of the time is spent infiltrating the towns, castles and abbeys for vital information. Although you can technically walk through the forest screen by screen, it’s much easier to just bring up the map to travel. The game uses the SCI1 interpreter, featuring hand drawn 256 color backgrounds, improved sound, and an icon-based interface. In addition to the standard “Walk”, “Talk” and “Use” icons, there’s also a “Bow & Arrow” icon, the use of which should be obvious, although you aren’t granted too many opportunities to use it.

Conquests of Camelot gave some vague pretensions of choice by letting you decide whether to rescue each of your knights. Conquests of the Longbow takes this a few steps further and gives you more opportunities to choose your path through the game. In most cases, this is the difference between convincing people to aid you – either through bribery or persistence – or merely threatening them. Obviously, it’s better to avoid violence where you can, but you can choose to be a jerk, if you wish. There aren’t any immediate consequences up until the end of the game, where your actions will ultimately decide Robin’s fate. If you acted like a thoughtless rogue, you’ll be hanged. If you acted decently, and earned enough points, you may even possibly wed Maid Marian herself.

There are a few cases where you’ll need to plan an attack – you’ll listen to suggestions from your compatriots and decide which to act on. These are unfortunately a bit arbitrary – choose correctly and you’ll complete the sequence with minimal causalities, but pick a wrong one and you’ll lose some of your team. This only really affects your point total, as well as the number of outlaws, as tallied at the top of the screen. You can also find ways to increase your treasury, and thus work towards the king’s ransom. It also has an effect on the ending, but otherwise still doesn’t quite feel like it serves much of a purpose.

There are also a couple of instances where you can “fail” an event, by letting Maid Marian get killed, messing up when trying to save some hostages, or losing the archery contest. The game will still progress as normal (most of the time), but you’ll be setting yourself up for a crappy ending, guaranteed. These alternate scenes allow for some extra replay value, as you can play the game a few times, intentionally screwing up just to see what transpires.

Although the adventure isn’t quite as epic as Conquests of Camelot – you never leave Sherwood Forest – it does have quite a bit more personality. Robin’s merry men add a bit more of a light-hearted tone to the adventure, as they taunt and tease Robin (or each other) about their misadventures or romantic transpirings. Most of the death sequences also have unique sequences where your band laments your death and basically talk about what an idiot you were to get yourself killed. It also contains more fantasy elements than the traditional Robin Hood story, as you find magic rings and cavort with tree spirits during the course of your quest.

Longbow takes the same general approach to puzzles as Camelot – there isn’t much of the usual lock-and-key type stuff, but there are lots of riddles, arcade sequences, and other minigames. Literally, for the first few chapters, all you need to do is stumble upon the event trigger, and you’re set. As you get further, you’ll need to fight in staff duels and enter archery tournaments, most of which are skippable if you turn down the Arcade difficulty setting. The only time you need to play a minigame is with Nine Men’s Morris, which is an ancient strategy game that’s kind of a mixture of tic-tac-toe and chess. Despite its initial difficulty curve – the CPU is not forgiving – it’s a pretty cool game, and the packaging even includes a board for you to play in real life.

There are also plenty of word riddles to solve, and again, most of them come from reading the manual. Since there’s no text entry, the game makes you spell out certain solutions through the use of druid hand language, where you click on various parts of your hand to signify different letters. This is something that’s vital to write down when you first learn it, of course.

The developers wisely learned from the mistakes of its predecessor, so there aren’t nearly as many annoying situations. There are two aggravating occasions where you’re being chased through the woods by the Sheriff’s men, requiring that you stumble from screen to screen until you find a safe place to use a magic spell. In the vein of those annoying chase sequences from Space Quest IV, you’ll usually need to some trial and error to figure out which way to go. But it’s nowhere near as bad as the frozen lake sequence from Camelot, at least.

Though it’s one of the most obscure of Sierra’s point-and-click adventures – it never received a CD release, even though they released a brief demo with some voicework, and didn’t make it on any compilations – Conquests of the Longbow definitely deserves better, especially considering how much it improves over its predecessor.