Knight of Diamonds was more like an expansion pack rather than a full sequel, so no wonder Sir-Tech didn’t actually call it Wizardry II (though the later Wizardry Archives and some Japanese publishers did) but The Second Scenario. The mechanics, classes and spells are exactly the same, only transferred into a new dungeon with a new quest and new monsters. 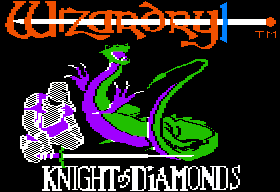 The background story is still brief, but at least a bit less cliché: The city of Llylgamyn is threatened by an attacking army, and the only thing that can save it is the Staff of Gnilda. The city has once been enthrusted with Gnilda’s staff and armor, but the deity has taken them away and cast them into a dungeon as the city has proven unworthy of them. That’s another job for the adventurers, of course, who descent into the depths to retrieve the artifacts. 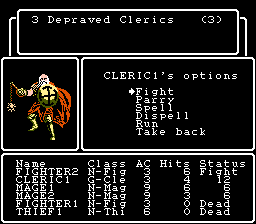 This second scenario not only allows to import characters from the original game, in fact it’s pretty much required. The original version doesn’t even give the option to create new characters, and everyone below the recommended starting level of 13 will be immediately stumped. Even reaching the very first armor piece requires the teleportation spell from tier 7. It’s not just grabbing the gear and getting out, either: All the armor pieces are animated, and put up a fierce fight that will require some grinding even for experienced parties. 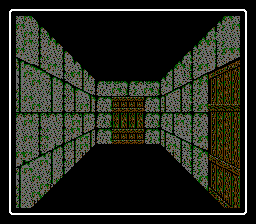 The dungeon is only six levels deep this time, but that mostly means less filler content than in the first game. On each floor there is something to explore, and of course a piece of the required armor. Since all the common and by now trite Dungeons & Dragons prototypes have already been deployed in the predecessor, the monsters are getting much more imaginative, from goofs like Vorpal Bunnies to threatening creatures like Hell Masters and Manticores. Especially in the Japanese versions Jun Suemi clearly had a blast with the monster designs, which are often simply amazing, especially on the Super Famicom. 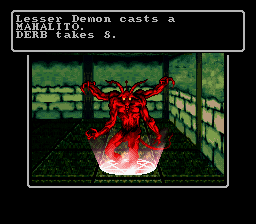 While most of the subtler differences between all versions will be described on the next page, the lack of a save import function for Knight of Diamonds on the NES forced ASCII to create an almost entirely different game. The basic dungeon layout and the quest remain, but instead of forcing players through the pain of getting their party up to snuff (although grinding is still a major element), all monsters and traps have been rebalanced. Rather than a mere “grind till you’re up to beat the next armor piece, rinse, repeat,” there is now a number of little puzzles and fetch quests involved in getting there. This sometimes even involves doing errands for monsters, and other – mostly automatic – interactions. This makes the console versions feel more alive and interesting than any of the other ones, and even though later ports reinstated the import function, the improvements fortunately stayed.