The middle of the 1990s was an odd era to be in for Wizardry. Traditional CRPGs were considered a dying genre (an image problem more than anything else – there were still plenty of games in the genre, but the big classic series all lay dormant), and the incredible success of Myst had thorougly shaken the market. So what could have been more self-suggesting than creating the somewhat unfortunately titled (Zork Nemesis was released earlier the same year, after all) Nemesis: The Wizardry Adventure. The series had always been in the first person, so going Myst-like in that department wasn’t much of a stretch, and some RPG elements could always be retained under the hood of a 3D adventure. This project was helmed by Linda Curie. Born a Sirotek, she had been with the company since the beginning, and earned her first game design stripes alongside her husband Ian with Jagged Alliance. But was she ready to take Wizardry into a new era?

Instead of creating an entire party, the player is put in the shoes of a predefined but positively bland dude, who for some reason is hunted by shadowy creatures known as… Shadows. Lucky for him, the village he just traveled to is home to Rian the Sage, who teaches him in the ways of magic and sends him on a quest to find the Nitherin talismans, which supposedly hold the secret to his only salvation. These artifacts are all conveniently located near the village, so the hero starts to walk around the vicinity and stumbles upon the talismans one by one. 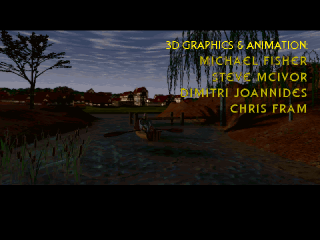 All areas of the game are directly interconnected with each other, with no overworld map for fast travel required or provided. Three targets can be reached from the village, but overpowered enemies and locked doors quickly railroad the player to one relatively linear path. The environments look good for their time and offer a lot of interesting sights and sufficient variety. Movement is stepwise like in the old Wizardry games, and even though it’s possible to turn on a “step-scale” option in the menu, it merely uses a kind of movement blur filter to weakly simulate actual movement, which really is more irritating than helpful. Only a certain few transmissions are fully animated.

Every once in a while, the player is attacked by a variety of monsters, who are roaming around freely this time. Combat mode can be toggled on and off fluidly by clicking on the sword symbol in the lower part of the screen. Various weapons, wands and shields can be attached to either hand, and clicking the left or right mouse button together with simple stroke gestures makes the hero slash out or defend himself. Even though there is a number of potentially interesting weapons, like a whip or iron claws, several swords gotten earlier are clearly more powerful. Armor pieces that can be found are simply a matter with replacing older ones for higher armor values. The one item that offers a bit of variety is the crossbow, which can attack enemies from afar but has a very limited contingent of arrows (they can be picked up to be used again after the fight, but only if they don’t break). 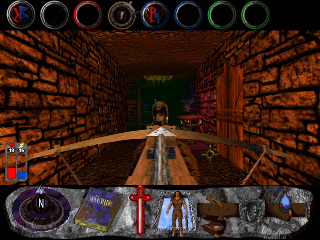 It’s also possible to equip a magical amulet, which can then be used to cast a variety of spells. The magic system is potentially interesting – each spell can be charged up to consume up to the maximum amount of energy, determining its strength. Clicking on the world makes the spell offensive, while targeting the hero himself (through his icon in the lower status bar) results in a healing or defensive spell. However, given the spell’s slow casting time and limited utility, it’s almost never a good idea to do so during combat. Sometimes it can be worth it to cast a spell on a particularly tough enemy (the ice storm is particularly effective, as it can immobilize even the mightiest dragon), but most of the time mindless hack-‘n-slash is the most effective way to get by. 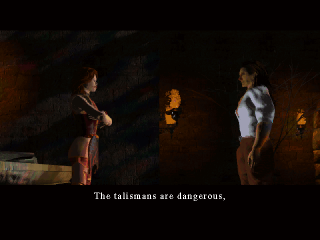 The hero meets several wizards who guide him along the way – so calling the game Wizardry is not false advertising!

The adventure elements don’t exactly profit from the genre mixture, either. Many puzzles simply require to find a key, or observe some pattern and repeat it in a door mechanism. In typical Myst-like fashion, there is also a fair share of simple logic puzzles. Whenever puzzles get a little more elaborate, they tend to be terribly contrived – early on, for example, male and female bugs can be found on the forest ground. One of each has to be put in a jar full of plants together in order to make them multiply. The resulting bug colony can then be used to eat through a certain spot of undergrowth, opening up the way onwards. Often things get bogged down to a pixel hunt, like the several occasions when a certain book has to be found in a library, or when items dropped by enemies aren’t immediately visible. Some items or hidden buttons aren’t even visually represented in the scenery, making blindly klicking around the only means to find them. The inventory is limited in RPG fashion, but in an adventure game it’s simply annoying when you have to leave items behind you never know if you have to use them again, even if the inventory space is very generous. There are five or six different wands to be found in the game, all of which are seemingly useless, except the one that is required to open a door a few hours later – and of course it has to be used not like an item, but as a weapon. The game also contains an afwul number of instant death scenes, so saving frequently is a must. It’s also advisable to keep several save states at different points, as there are a few rare ways to screw up a game forever. 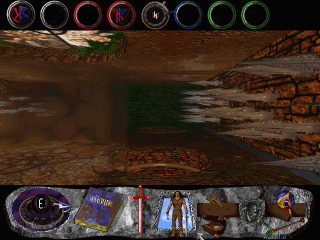 There are also some issues with tone. The old Wizardry games knew to go from goofy to cruel in an instant, but whereas the transition made for a morbidly humorous whole there, here it doesn’t quite fit together. Most of the time, Nemesis wants to be a straight dark fantasy game, supported by the gloomy surroundings and the dramatic delivery of serious topics by the few other characters that are met on the quest. For the hero’s comments upon examination of hot spots, however, Sir-Tech went for snarky and genre-savvy, which can really ruin the mood at times (if the involuntarily funny ’90s CGI models didn’t already do the job). Most of the monsters are modelled to look menacing, but then another time the player gets ambushed by a super deformed dragon cub. 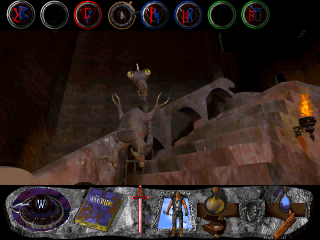 In Japan, Nemesis was also released for the Sega Saturn, which is a pretty straightforward port, but runs in a lower resolution. When downsampling the graphics, somehow the color palette was also turned really dark and murky, which can make it hard to recognize details. Given the cumbersome controller interface and the Japanese texts, it’s definitely better to stick with the English PC version. It’s only advantage is that it comes on only two CD-ROMs, opposed to the original five – the amount of disc swapping can get quite annoying on the PC. 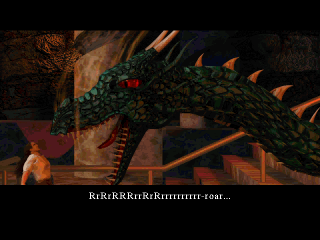 He isn’t as feral as he wants to make you believe.

All in all, Nemesis: The Wizardry Adventure is far from being the worst product of the “interactive multimedia” craze of its time. It is, however, rather quite insubstantial, somewhat shoddily put together, and simply not up to par with the rest of the series. It is worth a playthrough to see all its weird creatures and intriguing surroundings, and at least it doesn’t demand too much of a time commitment. It’s still rather long for an adventure game, but at the same time it is also a lot shorter than the more recent Wizardry titles, despite filling five CDs.