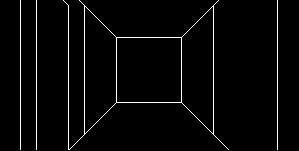 For someone growing up with games like GTA or Halo, it might be hard to imagine how Wizardry, with its simple narrative, cumbersome menu navigation, seemingly featureless monochrome wireframe dungeons and complete lack of sound could ever have appealed to someone. In 1981, however, it was the hottest new game around. Squeezed into roughly 25,000 lines of code (14,000 for the core game as per the manual) was the most complex game program people had ever seen on a standard home computer system. 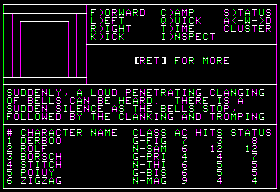 Wizardry’s story isn’t as boring as it sounds at first. Sure, it’s the same old “go and kill the evil wizard”, but Greenberg and Woodhead fancied the whimsical, which gave the setting a new twist. There is little heroic about the quest in Proving Grounds of the Mad Overlord. Instead of drawing the usual black & white picture with knights in shining armor, the party consisted simply of hired swords for the eponymous Mad Overlord. Trebor had only gotten mad recently, after the wizard Werdna paralyzed him with a spell to steal his magical amulet right in front of his eyes. To mock his arch enemy even more, Werdna used the amulet to create a 10-story maze right beneath his castle. Now driven legitimately insane, Trebor decided to abuse the maze as training grounds for applicants to his personal guard, hoping that someday someone would be able and crazy enough to get to the very end, slay the wizard and bring back the amulet. Wizardry kept this slightly silly tone in the manual illustrations. Those were provided by Will McLean, of Dragon Magazine and Advanced Dungeons & Dragons Dungeon Master’s Guide fame, who happened to be a college friend of Greenberg. Several of the messages and special encounters throughout the adventure are also rather on the whimsical side. 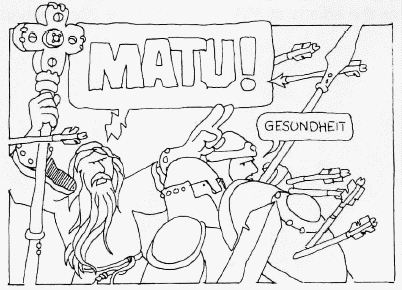 The gameplay, on the other hand, is dead serious. After being created, the party of six starts out in town stark naked, and the heroes first have to spend what little money they carry on the best possible equipment, lest they end up as stains on the floor within minutes in maze. Even fully armed heroes remain an endangered species, and woe betide the party that tries to storm the lower levels without extensive preparations. That includes drawing a proper map of the countless rooms and hallways, as Wizardry gives players almost no means of orientation. The doors and walls all look alike, the viewing distance is short (without the use of a light spell) and the only means to get an idea of one’s current location is a spell that prints out the current coordinates. But the dungeon is full of pits, turntables and unanounced teleporting floor tiles to impede any attempts at figuring out its layout. Many floors also wrap around on the 20×20 tiles grid. 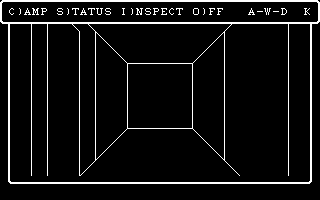 Orientation, however, is essential, as a dungeon raid only ends when either everyone is dead or the survivors make it back to town. Even though Wizardry does away with annoying depletable ressources like food and torches, half of the equation is deciding when to go back and try to finding the exit. Eventually the clerics will run out of healing spells, the mages use up all their orientation spells, and the inventory of 8 spaces each (including equipped items) gives room for only so many potions. Enemies respawn when re-entering a level, and there’s nothing more frustrating than a party that’s getting wiped out by inferior enemies just because no one had any health left. Even the loot grabbed from monsters kills, as many items are cursed. (Some of these actually have positive effects, but can only be taken off with professional help.) Mages can learn to teleport the party to any location in the maze, which makes things much easier, but it is only available on the highest level spell tier. Also, your maps better be damn good when using it, or the whole party may end up forever imprisoned within solid rock. 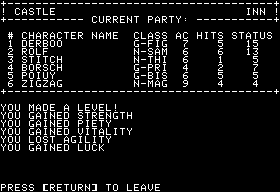 No need to start searching the manual for a quick load button, either, as Wizardry‘s most infamous feature is otherwise only familiar to fans of roguelikes: Permanent consequences. Wizardry automatically writes the updated status on disk after every single step. There is no save scumming – if your adventurers get obliterated by an out-of-league enemy group, they’re gone. Well, sort of. In theory, a fresh team of adventurers can arduously drag their predecessors’ bodies back into town and invest a tremendous amount of money in their resurrection. High-level priests can even try to resurrect their fallen comrades on their own. The process isn’t as well-proven and casual as in modern fantasy role-playing games, though, and the revenants are prone to rapid aging. They also might end up being reduced to dust instead, lost forever. No refunds. 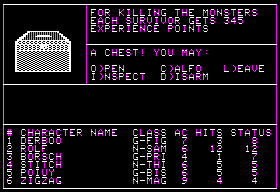 Combat won’t be too unfamiliar to JRPG fans, as the basic framework of menus with options like “fight”, “spell”, “parry” or “run” is the same. The two major differences are the monsters being grouped into units and the two-line formation of the Wizardry party. Only the first three heroes are able to attack the enemies directly, the other three have to support them from behind with spells. The traditional Wizardry universe doesn’t know ranged weapons, so until the spellcasters learn more powerful magic, most combats are fought in the once famous-infamous fight-fight-fight-parry-parry-parry formula. In turn the characters in the back row are also much safer from direct attacks. Battles of course are the most deadly part of the expedition. Requirements for nowadays basic spells like poison healing are surprisingly high, and beyond the first few floors there are few enemies that don’t carry over some kind of illness. Every Wizardry veteran can tell cautionary tales about the dreaded vampires and their ability to drain hard earned character levels faster than you can scream “bullshit!” Yes, hours of grinding can be undone in a single fight with vampires, permanently. Then there are the ninja, who have a chance to kill even the strongest characters instantly by beheading them. 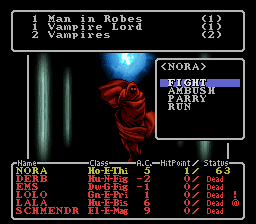 And that after all that effort that goes into building them up – all characters first have to be crafted by the player before jumping into the adventure. Although it is allowed to send single characters to their doom, it’s much more reasonable to have a full party of six ready, and a number of spares for those who don’t make it. (Traditionally, a save disk can hold up to character 20 slots.) Creating characters is somewhat annoying, though. After choosing a character’s race from the Tolkien / Dungeons & Dragons staples (Human, Elf, Dwarf, Gnome and Hobbit) and an alignment (good characters won’t join a party with evil ones, and vice versa), bonus points have to be distributed to six attributes to determine the classes available for the character. The problem: 19 out of 20 times it will be about 7-10 points, but very rarely the number can be much higher, even allowing characters to start the game as a Bishop or Samurai. But no matter which class you’re aiming for, of course the higher bonus is much desirable, leading to hundreds of discarded characters and hours of trial and error. The elite classes are also available when meeting their restrictions later, but changing the class makes the character age 5 years, and the attributes are reset to the race minimum without any bonus points, while the character keeps the achieved hit points and spells. 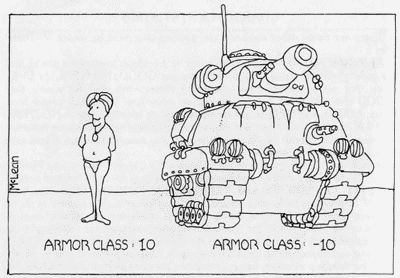 “Why armor class is important”

The class names differ a bit from the D&D norm: The Bishop is the template for Final Fantasy‘s Red Mage, as he learns spells both from the mage and cleric schools, albeit at a slower rate. This is also the only class that can identify magical and cursed items, and enables access to a legendary experience glitch. In addition to being formidable fighters, Samurai very slowly learn mage spells, while Lords essentially equal paladins with priest spells. The highest elite class is the Ninja, a bare-handed killing machine whose training gives incredible armor bonus while not wearing any armor at all. 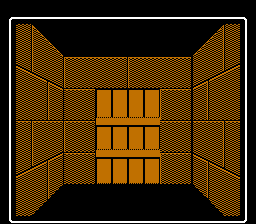 The base classes of fighters, thieves, priests and mages are more conventional, but they work a bit differently than one is used to nowadays, too: Thieves are basically just human can openers, as they’re almost useless in battle, but the party won’t get many treasures (or they die trying) without them. Mages and priests work similarly to 2nd Edition D&D with a limited number of uses per spell level instead of MP, only they don’t need to memorize the individual spells before resting. 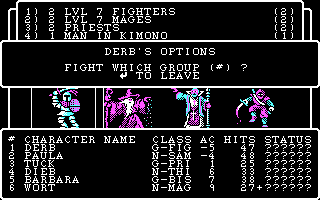 As a whole, Wizardry clearly betrays its place in a time where no one had ever heard of modern design philosophies. Wizardry doesn’t just contain a lot of grinding, Wizardry is grinding. Half of the appeal of the game was to see one’s own party grow and become stronger despite all odds. The other half was mapping out the dungeon on graph paper. Once figured out, there’s actually not much to the quest. Given a properly leveled party and complete map, one could easily get to the final battle within minutes. In Wizardry, the journey is the reward more than in any other game. 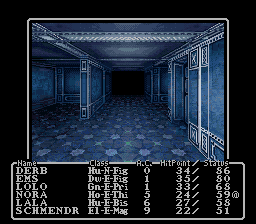 At least it was supposed to be like that. For a modern gamer, it’s more likely to be just a lot of frustration and annoyances. The rate of random encounters is low, and the experience requirements for leveling rise exponentially, requiring hours upon hours of grinding just to survive the next floor, and it can all go to waste within seconds when the party is unlucky enough to encounter a huge group of vampires. The interface is still very inconvenient, you actually have to look up spell names in the manual and type them in yourself, the same goes for traps when opening chests. The worst, however, at least in the original Apple II version and most home computer ports, are the loading/saving times. They aren’t particularly long, but the game briefly pauses for every action, be it entering a new floor, attacking an enemy or accessing a menu.