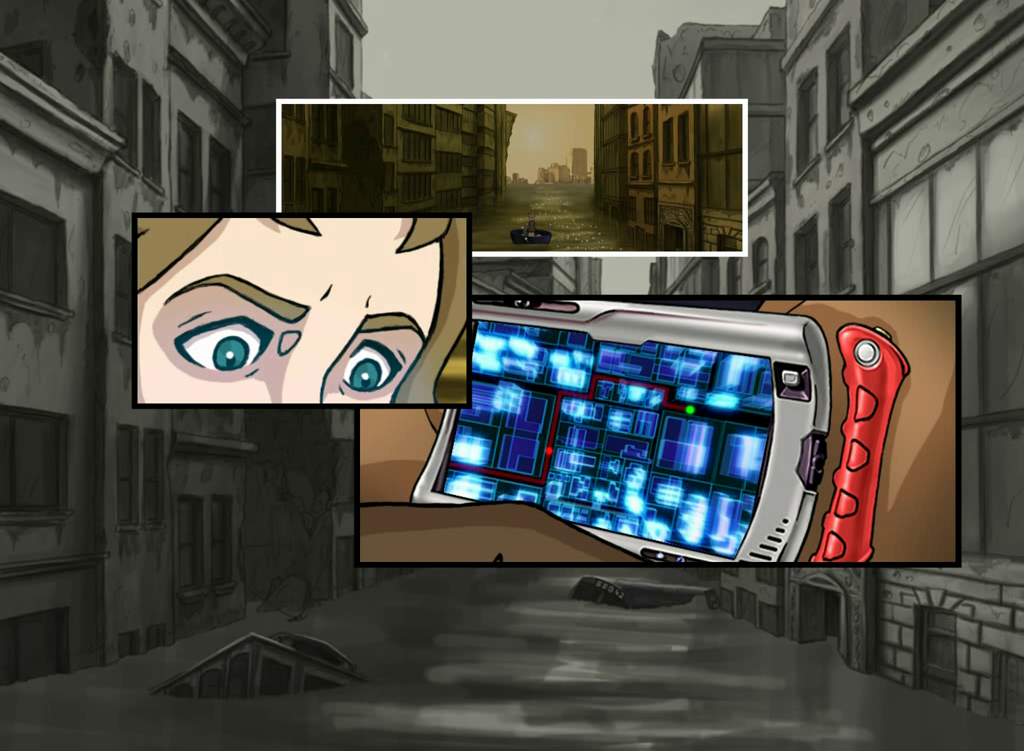 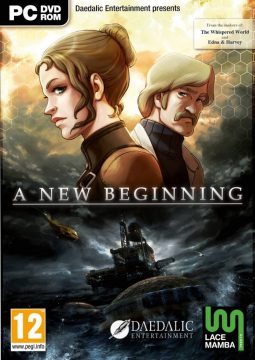 While Daedalic’s work in comedy games like Edna & Harvey and the Deponia series are their studio defining signature, they have tried many more serious minded games to different levels of success. One of their earliest attempts, A New Beginning, doesn’t really fit in the “better” part of the chart, but it’s daring in a lot of unexpected ways. While Deponia‘s themes of environmentalism and anti-capitalist economics were mostly background dressing, A New Beginning makes these the main themes and plot motivation, though dressing it all in pulp sci-fi style. It mostly succeeds at delivering its message, but the impact is lessened by art and technical issues.

In the far off distant future of the 26th century, a solar flare is about to finish off all life on Earth, as the complete destruction of the planet’s atmosphere as left the planet completely defenseless. In a last ditch effort, the remaining humans band together to create the Phoenix Project, an attempt to travel back in time and change history to avert their annihilation. Fay, a radio operator, goes to 1982 to find the Finnish eco scientist Bent Svensson and use his algae-based alternative energy discoveries to create a new interest in alternative energy, planning to present it at an international summit. However, a corrupt energy mogul and a time traveler gone rogue may prove wrenches in Fay’s plans. 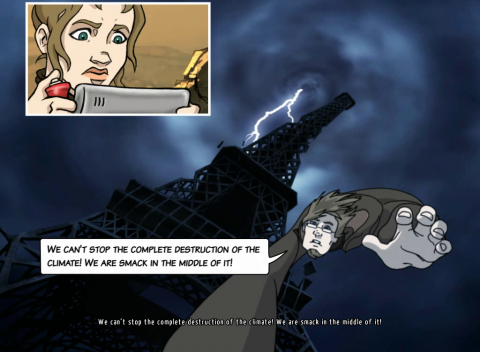 A New Beginning ends with a side character making a supposedly fictional novel based on the events of the game, and has an interview about how they’re trying to change minds with a sci-fi pulp novel, so it’s safe to say this is definitely a game aware of what it’s doing. A New Beginning has some of Daedalic’s sense of humor in there, like with an obnoxious and buggy Microsoft Helper style AI and the Rufus-ish Oggy, but most of the broad strokes are dramatic and very obvious. This works overall, making it clear why you should care about climate change and why you shouldn’t just ignore or deny the problem, both with positive and negative examples. The spotty science in a few parts even ends up being clever subversion for a huge late-game twist that’s well set-up and executed. The story moves briskly, only slowing to give us time with Bent and Fay so we better connect with them. It has a strong sense of character and purpose, but it’s pulpy sensibilities tend to undercut it a tad, even if a major point of all that pulp is subverting it.

The game’s big twist does make good use of toying with audience expectations, even with how it tells its story, but it doesn’t validate every silly moment. Seeing protesters commonly referred to as eco-terrorists by even the most minor of characters never feels quite right, partly due to the acting. The English version has a truly poor dub with wooden acting all over the place, and not enough ham to sell the sillier lines. Bent and antagonistic time traveler Salvador fare best, though even their delivery feels off at times. On the other hand, the obviously corrupt corporate executives and bought off scientists are perfectly ridiculous, especially when compared to the modern lunacy of climate change deniers. The idea seemed to be highlighting the stupidity and absurdity of denying a serious issue affecting our world, but the game has a strange problem of both going too far and not far enough in equal measure. 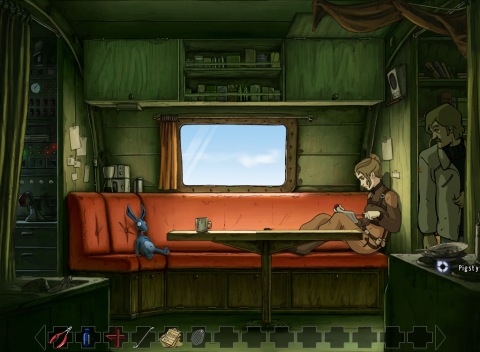 The puzzles range from simple to inventive, matching well alongside the puzzles in the later Deponia series. Logic will often give the answer, though you do also need to pay close attention to the screen to see easily missed important details. The English version is a bit confusing, though, as several items aren’t translated properly, and in a few odd spots, actions are written out in Russian. The point and click controls are also a little odd here, where you have to hold down after a click and use a wheel to select an option, like using, taking, looking, and other such options. It’s an interesting solution for fitting in multiple options when interacting with objects, but it’s jarring at first and no substitute for later simplified point and click control schemes.

The biggest issues come from the art direction and technical foundation. The comic style of the game is novel, and at its best, a clever way of portraying complex scenes that would otherwise be too costly to show. The paneled cutscenes are striking and entertaining, but the impact is lessened by the fugly character art. Everyone looks fine enough in the game proper, but the cutscene designs have odd shading issues, discoloring (especially with beards) and just bizarre expressions that never look quite right or fit the mood. It’s all the more noticeable thanks to these moments contrasting with the constantly lovely setting illustrations, like these characters don’t quite match the world they exist in. On top of this, if you’re running the game on newer PCs, even with compatibility mode, there’s a chance the game will crash after some cutscenes (particularly the one where Fay jumps to Bent’s time), with the only solution being a press of the skip button right before the scene finishes. If that wasn’t enough, if you have text on, it will sometimes be cut off if the character is near the top of the screen, so it’s best to keep voice acting on. 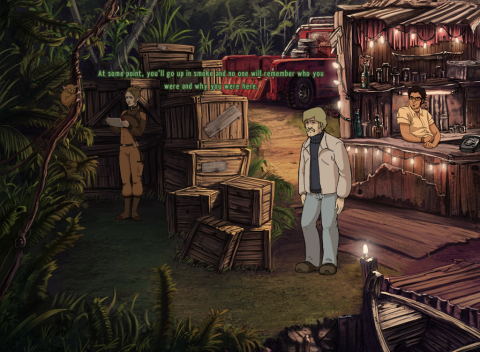 A New Beginning lacks a lot of polish, but all that tarnish doesn’t completely diminish what the game has to say and how it gets there. It’s very exaggerated and silly at many a point, but its few moments of narrative cleverness make up for it, as does its ultimate message. We have to start acting now, in whatever way we can, to save our planet, because this problem isn’t going away. The worst villains here all fail to act because they simply ignore the problem or refuse to believe it exists, and the unnerving thing is how close these cartoonish villains are to the actual villains in the world right now – including the ones running governments. They’re ridiculous, but the fact that fighting climate change is considered a two sided debate in the first place is equally idiotic. A New Beginning nails that grim absurdity, and challenges it with a message of hope, ending the uneven work on just the right note. It’s significantly flawed, but it can’t be faulted for its ambition.