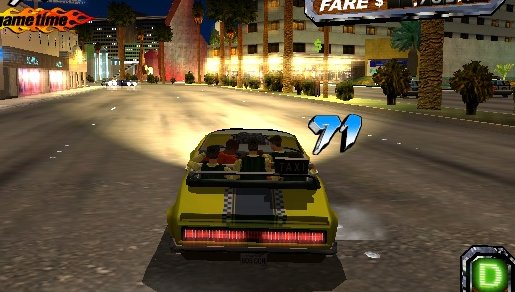 While donning the number three, one thing you’ll noticed about this game is that it seems more like a collection of Crazy Taxi 1 (featuring the West Coast Arcade level, but no West Coast Original) and 2 (featuring the Small Apple level, but no Around Apple) with a new area to explore (Glitter Oasis, which is based on Las Vegas and the deserts of Nevada.) Once again, there’s a whole new cast of cabbies. 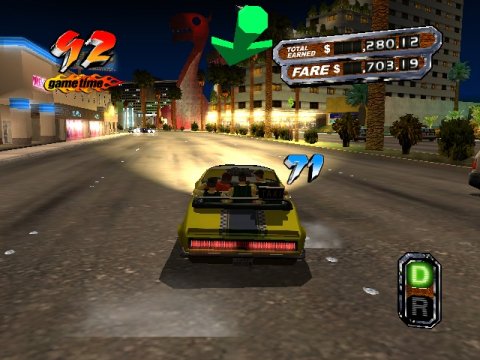 There are no real updates to the game other than a tweaking of the Crazy Dash to make it a bit easy to pull off. The biggest draw for this game instead of being the new area of Glitter Oasis is being able to play the West Coast with the Crazy Hop and the ability to pick up multiple customers at a time. It’s an incredible shame, seeing how Glitter Oasis has so much potential, but it’s just too aggravating to play compared to the first two games, with its obnoxious canyons and extremely long stretches of road It completely misses what’s actually interesting in the level: the actual city area. The entire stage seems to have been constructed purely to show off the lighting effects courtesy of the Xbox, which is the only major graphical improvement over the Dreamcast games.

Other than that, this is standard Crazy Taxi fare. The mini games are back in the brand new Crazy X mode, but most of the games are recycled from the previous two. The usual assortment of unlocks are here including the new horse stroller (?!). The best unlock in the entire series from besting Crazy X mode is the ability to play as any character in any course. While a lot of tracks by the Offspring, Methods of Mayhem, and Bad Religion return, there are more varied musical tracks with the inclusion of Brian Setzer 68 Come Back Special and Silver Bullit. Overall, if you’re a fan of the game, you’ll love it for it being more of a collection of the series, but hate it for not advancing the series anywhere. 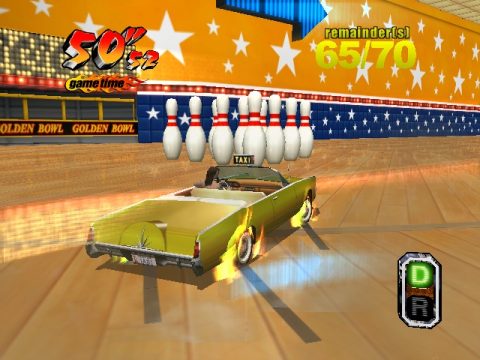 Sega would release an arcade version of Crazy Taxi 3 a year later, dubbed Crazy Taxi High Roller without the numeral. The arcade runs on the Sega Chihiro board based on Xbox hardware and plays exactly the same except it actually uses a sterring wheel. Nothing new is added to this arcade rendition other than putting difficulty levels on the courses so you know which area is easier than others ( from easiest to hardest: West Coast, Glitter Oasis, Small Apple). Once again, Activision and Strangelite handled the PC port and yet again was unsuccessful in bringing the game over intact. It suffers from the same problems as the PC version of the original Crazy Taxi, except it’s even worse than before.