It’s no secret that mascot platformers were a big thing in the 90s. Everyone in every industry wanted a piece of that lucrative pie, and the stranger cases like Cool Spot and Yo! Noid are still somewhat infamous to this day, perhaps more for the absurdity of their licenses than anything else. One surprising contender who threw their hat into the ring was JVC Musical Industries, or Victor Musical Industries as they were known in Japan at the time. JVC clearly saw potential in the rise of 16-bit gaming and disc-based home consoles and partnered with Sega to release the Wondermega in 1992, a console that combined the Mega Drive and Mega CD alongside extra features like MIDI output and microphone inputs, letting it masquerade as a karaoke machine too.

JVC consulted Core Design Limited, a British company, for their assistance with creating a mascot game called Wonder Dog in order to help sell their new console. Core Design already had quite a history, working on titles for computers like Rick Dangerous and Impossamole, so they were well-versed with creating platformers. Wonder Dog is a pretty competent game that also served as one of the earliest platformers on the Sega CD, but it wasn’t enough to make the Wondermega a success. This would be JVC’s one and only attempt to breach the console market, though the console did at least get a second release as the JVC X’Eye in North America in 1994. This didn’t stop Core Design from supporting the Sega CD for years with games like Battlecorps and Soulstar though, and they would go on to achieve tremendous success with Tomb Raider in 1996, so Wonder Dog failing to set the world on fire clearly wasn’t too big of a deal for them. 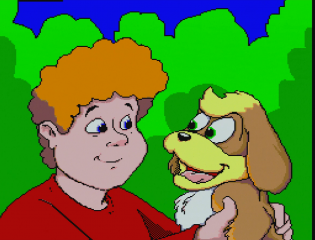 Utilizing the perks of the CD format right from the get-go, Wonder Dog starts off with an animated intro explaining the titular character’s origin story – A scientist by the name of Dr. Kibble on Planet K-9 sends his son to Earth to protect him from the invading Pitbully armada, but not before injecting him with the “Wonder Serum” that grants him superpowers. Once Wonder Dog lands on Earth, he befriends a child for a bit before the child’s father forces them to part. With his new friend no longer around, Wonder Dog returns to his ship, dons his superhero outfit, and sets out to save his home planet from the Pitbullies.

The intro is remarkably long for a game like this, lasting over five minutes, but the rest of the game does absolutely nothing with it, so it feels more like a tech demo than something additive to the experience. The beginning pulls from Superman in a pretty blatant way, but doesn’t follow up on that inspiration from there. The child that Wonder Dog met never comes up again, and the animation of the intro is pretty rough in general, suffering from some ugly character designs and awkward transitions as a result of the Sega CD’s load times. The ending also feels extremely rushed, providing minimal closure and no sound whatsoever, making it clear this game isn’t a shining example of what the Sega CD could do in terms of presentation. On the other hand, the music is one of the game’s strongest points, featuring smooth acid jazz-style tunes that make full use of redbook audio, even if they don’t necessarily mesh with the aesthetics of a given level. The voice acting during the intro tries a bit too hard to be serious and the sound design is otherwise unremarkable, but most of the enemies do sound like Homer Simpson saying “D’oh!” when they die, so that’s pretty entertaining in its own right. 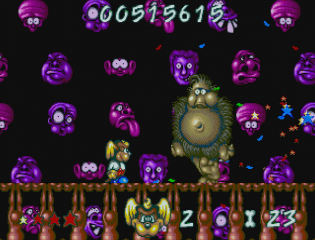 Despite its European origins, Wonder Dog’s general design feels more in line with what Japanese platformers were doing at the time, Sonic the Hedgehog in particular. You’ll find no labyrinthine levels here, as every stage is a linear, left-to-right affair. The game is divided between seven levels with up to four parts each, as well as two secret levels that can be found as a reward for exploring. Much like Sonic, you’ll have to complete all the parts of a world in one go, since continuing brings you back to the first part of each world, but there are passwords that let you tackle the game in chunks if you wish. Your goal in each level is simply to make it to the end, but there’s plenty to find as you go. There are collectibles in the form of bones and gems that give you points toward your score, resulting in more lives once enough have been collected. Hidden rooms are abound as well and are accessed by touching seemingly empty locations in a given level, encouraging you to poke around in every nook and cranny. Also like Sonic, levels tend to be designed in a way that divides them between a high and low route, so there’s replay value to be had in finding which route provides the most reward. Power-ups are available as you’d probably expect, though they’re limited to a tornado that makes you temporarily invincible and a smiley face that has Wonder Dog reveal every invisible platform within a world via some meditation.

Wonder Dog himself has a small range of actions, including running, gliding in the air after a jump, and a means of attack via stars that can be tossed around. Up to three stars can be on the screen at a time, and they’ll bounce off of walls several times before disappearing. You can also hold the button to charge up your toss, leading to a more vertical trajectory that’s useful for hitting some of the game’s taller bosses. This attack feels like a pleasant change of pace compared to the genre’s usual reliance on jumping on top of foes, but it ends up making the game very easy most of the time, since you can just keep chucking stars from a distance to rack up multiple hits and kill anything in seconds. Perhaps the one thing keeping it balanced is the lack of fine horizontal control – stars seemingly bounce around at random when tapping the button, so it can be surprisingly tricky to throw stars directly in front of you when a smaller foe approaches. Mistakes are rarely costly though, since Wonder Dog can take three hits and healing items are plentiful. 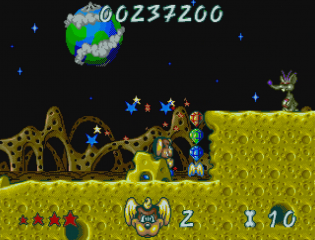 Graphically, nothing in Wonder Dog looks like it only could have been done on a CD, but it makes up for this with some remarkably creative visuals and varied level design choices. The first three levels take place on Earth, bringing you through fun locations like a city full of dogs and a scrapyard where you use old mattresses to bounce around. Once you get off of Earth, Wonder Dog decides to make some stops at some pretty entertaining places on the way to Planet K-9, even if it seems to be for no real reason at all. Loony Moon takes the old proverb of the moon being made out of cheese and brings it to an extreme by having you deal with the mice that have now made it their home. Planet Weird lives up to its name incredibly well, containing an unsettling combination of goofy faces on a black background and platforms made out of humanoid bodies holding each other up. Planet Foggia is the smallest section of the game, but it has you completing a boss rush against aliens that specialize in smoke and fog attacks. After all this, you finally make it to Planet K-9 and take on the Pitbullies themselves, which is arguably the least interesting portion of the game since it doesn’t really introduce anything as humorous or bizarre as what came before it. Boss fights tend to be simple affairs, usually against a human, an alien, or some kind of machinery, but some of their designs are fun and they’re massive, well-animated sprites that visibly react to taking damage.

Wonder Dog is a somewhat incoherent game, full of ideas that don’t feel properly connected, but this unpredictability and unorthodox approach also gives it a distinct identity that makes getting to the next stage more rewarding when compared to other mascot platformers of the time. For those who never had a chance to be exposed to European-style platformers, it’s a potentially good place to start due to its low difficulty and straightforward level design. It’s by no means a must-play game in the genre, but it’s an uncommon blending of platforming design philosophies from two different regions with a bit of interesting history behind it, making it worthy of recognition nonetheless. 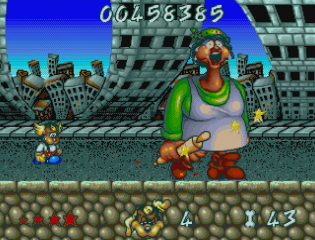 Wonder Dog was ported to the Amiga a year after the Sega CD version released and was exclusive to Europe. As you’d expect from a transition to floppy disks, some compromises had to be made, primarily in the audio department. The soundtrack used for the Amiga version is completely different, opting for a strong funk sound instead of the more jazzy compositions of the Sega CD version. MIDI output doesn’t do it any favors compared to its CD predecessor, but it’s still groovy enough to remain one of the game’s highlights. What is a much greater problem is the fact that you can only choose between music and sound effects, not both. The intro was axed entirely and the already brief ending was replaced with one screen’s worth of text, which curiously refers to Planet K-9 as “Planet K-Ninus” instead. Backgrounds lost any animation they had, Planet Weird’s background faces being the most notable example, and the colors used are more washed out in general, but the details of the character sprites at least remain intact.

In terms of mechanics, there are several changes that lead to an overall lesser experience – Up is now the jump button, you can only have two stars onscreen instead of three, stars move a bit slower and do an ever poorer job of hitting directly in front of you, and Planet Foggia was removed entirely. Most problematic of all is the fact that Wonder Dog’s walk has now been replaced with a permanent run, making it far harder to be precise with platforming. It’s not a bad port, but there’s little reason to play it over the Sega CD version. If the Amiga is your preference though, a hacker known as Earok has you covered – with the blessing of Dan Scott, a developer on the original game, Earok created a hack of Wonder Dog that brings the game up to the standards of what it could have been on the Amiga CD32, resulting in improved visuals and the ability to bind jump to a normal button. 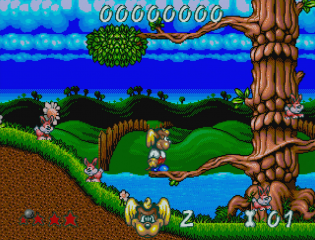 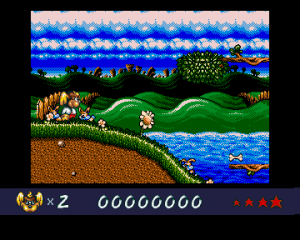