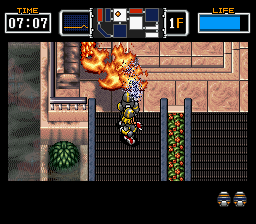 When Human Entertainment closed their doors in the late 90s, the gaming market was barely affected. Spike was able to continue with their Fire Pro series so faithfully that it was almost like they had never left. Furthermore, even though Clock Tower – their other significant series – was basically flushed down the crapper with its lone post-Human installment, that series had already been all but forgotten, as most people had already moved on to Resident Evil and Silent Hill for their survival horror fix. But their demise also took a few silent casualties with it. Their Sugoro Quest series of four player RPGs/board games remains arguably the peak of the video board game genre, but that franchise remains M.I.A. since Human’s departure. They also made their fair share of sports and racing titles, but not one of those have yet been revived. Maybe the most noteworthy of the properties to have died along with them is a duo of games called The Firemen. 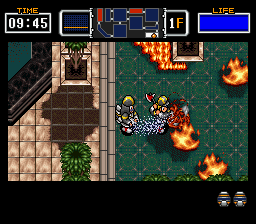 As their names would indicate, both titles in The Firemen series are simply about fighting fires. They follow two fire fighters named Pete and Danny as they do their job hosing down flames, hauling ass through burning buildings, and saving the people trapped inside. Beneath the series’ less conventional fire fighting theme is a couple of pretty traditional overhead action games. Only instead of blasting away at soldiers or monsters, like in most of the genre, the targets of your wrath are flames. And rather than emptying clip after clip of your giant Contra-sized laser gun, or something, the only “weapon” that you get to tote around is a water hose. It’s a pretty cool change of pace from the norm, and at least one of the games plays pretty damn well, too. The series consists of two installments – one for the SNES/SFC, and the other for the PS1 – both released around the mid-1990s.

The first entry in The Firemen series is among those rare titles that was released in Japan and Europe, but passed over for publication in America. This probably had something to do with the mundane fire fighting theme, but that wouldn’t explain how Jaleco’s similar SFC game Fire Fighting made it to America as The Ignition Factoraround the same time. Outside of language differences, the Japanese and European releases are completely identical games. If you’re playing the European version you can set the language in the options mode to either English, French, or German. 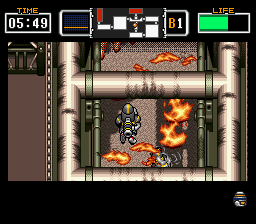 The intro states that “The year is 2010. Civilization has progressed little in the last twenty years.” (Apparently this game accurately predicted the future.) Some big-ass office building has been set ablaze by a chemical fire, and the high rise fire fighting squad, led by Pete and his second in command Danny, are called in to extinguish the flames and save the day. You take control of Pete, who hauls around a seemingly magical remote hose that can generate an endless flow of water. Then there’s Danny, Pete’s partner and the player’s best friend. Everywhere that Pete goes, Danny is right beside him, hacking away at the flames with his amazingly effective axe. You have no control over his actions, but his A.I. is flawless and he’s completely fire-proof, so it’s sometimes a good idea to let him put out what fires he can extinguish while you take care of only the most immediate threats.

For the most part, it’s just straight forward action game kinda stuff, with bosses and out-of-control robots to take down, and various hazards to avoid. The entire game takes place in just one highrise, with each of its six levels starting exactly where the last left off. If it weren’t for the fact that you can’t backtrack, the whole game would appear to be one long, gigantic, continuous stage. You also have a map of whatever level you’re currently in at the top of the screen, but the stage layouts are so intuitive that you really never even need it. Despite the fire fighting theme, you’re never actually forced to put out all of the flames in any room or stage to complete them. Instead, your goal is just to try to survive the blaze as you navigate your way through the building. For those who insist on putting out all of the flames anyway, the total percentage of the fires that you put out is tallied up at the end of each level. 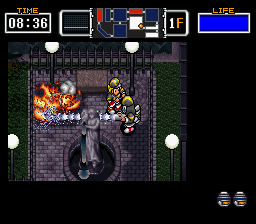 There’s a surprising amount of creativity in applying the fire fighting theme within the action game context. The flames take on several different forms, with their own patterns and properties. Some of them regrow to full size if they aren’t totally extinguished, while others spread out, igniting the floor around them and taking up large portions of corridors and rooms. You can aim your stream either downward or straight ahead – both are often required to put out fires that are too high or too low for the other stream to reach. You also have the ability to crawl, which is absolutely required for passing many of the hazards you’ll encounter. It won’t seem that important at first, but if you really wanna have any chance in hell of surviving into the later stages then you need to get accustomed to strafing – the blaze can get overwhelming after just a couple of levels, so it’s essential to learn to dodge and fire at the same time. If it all becomes too much to deal with, you can also hurl a fire extinguishing bomb that puts out any flames within its blast radius.

Once or twice per level, you’ll find somebody trapped in the building. Approaching them will initiate a brief exchange of words, followed by Danny automatically hauling them outside to safety. Saving these people is entirely optional, but, to discourage you from being a cruel bastard, you get rewarded with a massive health boost for your efforts. Later on in the game, the building will start to collapse, sending you plummeting through holes in the floor if you’re not careful. Around the same time, you’ll also have to start worrying about back draft, forcing you down to the ground to avoid the bursts of flame that blow out of doors when you open them. There’s even a brief section of level three where you ride a truck-mounted crane from out one window and into another.

Much of the building shows fire damage to begin with, and when the flames spread out they actually permanently char what parts of the floor they set fire to. The long burning flames have also filled many of the rooms in the building with thick, wavy, clouds of smoke. It’s a great looking game overall, if a bit basic. Couple that with fairly decent music, and its intense gameplay, and you’ve got one of the best overhead action games of the 16-bit era.