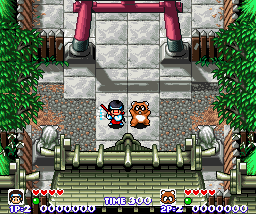 After a year off, the series would make its return in 1992 on the Super Famicom as Kiki Kaikai: Nazo no Kuro Manto (“The Enigmatic Black Mantle”). In other territories, the game and its two protagonists were renamed to Pocky & Rocky, a change that would stick with every entry afterwards. Rather than being a Taito joint, this game and its sequel were licensed out to Natsume; while such licensing deals can lead to potentially strange or underwhelming entries in beloved franchises, that is most certainly not the case here. Pocky & Rocky is generally regarded as the strongest entry in the series and that reputation is well deserved. 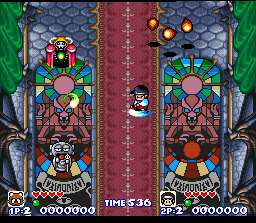 At the start of the game, Pocky (originally Sayo-Chan) is visited by Rocky the tanuki (Manuke in Japanese), a former enemy now desperate for help. He tells a story of how the youkai (referred to as the “Nopino Goblins” outside of Japan) have gone crazy once again and pleads for Pocky to intervene since she was able to stop them the first time around. She agrees to help and the journey to uncover the scheme of the mysterious Black Mantle and fight his “Gorgonzola Goblins” begins in earnest. The story is more prominent here than in the previous two games, with cutscenes placed after each stage and occasional instances of dialogue from bosses prior to fighting them. It’s a simple tale with a sufficient mystery that’s well presented thanks to colorful illustrations and charming writing done by Yoshihito Hattori.

There’s even some environmental storytelling in the game’s final level – as you proceed deeper into the Black Mantle’s castle, you’ll witness the youkai from the original game captured in jail cells and PukaPukas being transformed into stronger versions in the underground lab, showing the player the Black Mantle’s intent and giving the finale a distinctly darker vibe. However, if you’re playing the PAL version, you’ll miss out on most of the story because it removes all of the text from the cutscenes! 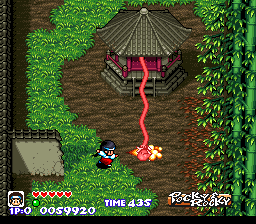 While the core gameplay is the same at a glance, Pocky & Rocky introduces several new mechanics that have a significant impact on the experience. Sliding allows players to quickly evade attacks and can also be used for a unique co-op maneuver in which one player slides into another and launches them around the screen, resulting in a deadly spinning projectile. Bombs are exactly what you’d expect from any shoot-em-up and can clear out foes or deal significant damage to bosses. They’re rare and the amount you start with depends on your chosen difficulty, so they’re best saved for urgent situations. Melee attacks can no longer be used while moving, but they now provide the ability to reflect projectiles back at enemies in exchange. Melee attacks can also be charged, which grants each character a unique ability – Pocky spins wildly and tears through foes with her gohei and Rocky transforms into a statue that’s completely immune to attacks for a short time.

Power-ups work similarly to Dotou-hen in that you lose them upon taking enough damage, but now both your starting projectile and the fireball can be upgraded multiple times. The default projectile is ideal for taking on groups and the fireball exchanges crowd control for sheer power. The introduction of these new mechanics makes Pocky& Rocky much more dynamic than its predecessors; you’ll have to juggle dodging, reflecting projectiles, utilizing bombs, and shooting to get past the trials the game throws at you. 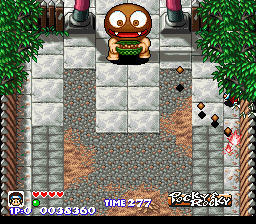 Perhaps most significantly of all, two player simultaneous co-op is now available, allowing for both characters to work together to complete stages. This is the ideal way to play as it makes dealing with the challenging hordes of enemies more manageable. Players can even sacrifice lives to resurrect a teammate who has fallen, allowing skilled players to drag less experienced ones to the finish line. Both players can select either character and the two have several differences. Aside from the obvious visual differences, Pocky has faster movement and sliding, as well as more powerful bombs that cover a more narrow range, whereas Rocky’s slide travels a greater distance and his bombs offer a wider area of effect.

Though it wasn’t designed for an arcade environment, Pocky & Rocky still puts up one heck of a fight. Each of the six stages are relatively lengthy and filled with unique enemies, tricky hazards, and oftentimes multiple bosses as well. The game loves to surprise you with groups of foes that take multiple shots to defeat, making it easy to get overwhelmed if you’re flying solo. Some of the environmental hazards, like the raft sequence in stage two that has you fending off kappa that try to pull you into the water, can incur harsh penalties to a player’s health for a single mistake and end runs faster than expected. 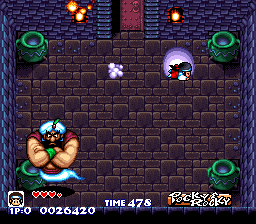 Even with the ability to sustain multiple hits and the shield power-up taken from Dotou-hen, death can happen as quickly as ever. Thankfully, infinite continues are available this time with no strings attached, so persistent players will eventually make it through. Some new power-ups help you breeze through chunks of stages as well, including a mount called “Mad Dog” that tears through crowds and surprise supply drops from the Seven Lucky Gods if you can find them hidden within stages.

Pocky& Rocky’s presentation is an enormous step up from the past two games, offering a significantly greater variety of environments and music. The first level takes place within the grounds of an ever-familiar shrine and is a tribute to both the original game and Dotou-hen, with its nighttime sequence and having the same first boss as the original game, but subsequent levels take you through a bamboo forest, a graveyard full of the undead, a battle atop an airship with pirates, and through the Black Mantle’s castle. This also leads to a plethora of new foes to accompany the returning favorites, many of which go beyond the Japanese folklore theming of the first game. The Japanese cover art was provided by Yoshitou Asari, known for the comical manga Space Family Carlvinson.

Composer Hiroyuki Iwatsuki’s music adds a lot to the experience, adding both ambiance and excitement in equal measure. Inspired by the Fusion band Casiopea, his goal was specifically to add energy and vigor to his musical works and Pocky & Rocky exemplifies that splendidly. The sampling capabilities of the Super Famicom also allowed him to experiment with unique ways of creating sound effects, such as recording the sound of water dripping into a bucket to recreate the sound of water in-game. 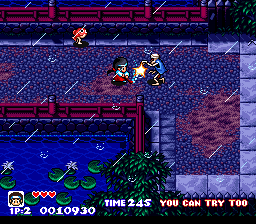 Despite how well regarded this entry in the series is, it remains exclusive to the Super Famicom/SNES and fetches tremendous prices on the secondhand market. Curiously, the next few entries don’t take quite as many notes from this one as you’d expect. Pocky & Rocky 2 plays similarly and looks nearly identical visually, but it makes several divisive changes to the co-op formula and throws in some other mechanical tweaks. Pocky& Rocky with Becky looks back towards the arcade game rather than this one and Heavenly Guardian is a different beast entirely. Pocky & Rocky Reshrined finally makes the decision to return to this game as base in order to expand upon it with additional characters.