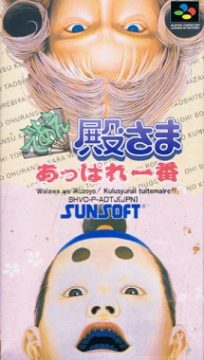 Some retro games acquire mythical status for being both very elusive and very expensive. One such game is Deae Tonosama Appare Ichiban (roughly, “Meet Tonosama! Bravo! Number One!”), published by Sunsoft and developed by a branch of the company called Tokyo Design Center for the Super Famicom in late 1994. The late release, coupled with the fact that the game was probably never intended to get outside the Japanese market, is what ensured the rarity of the title. Magazines of the time reported that it was going to be released in the West with the title “Go for It, Tonosama”, but nothing came of it. 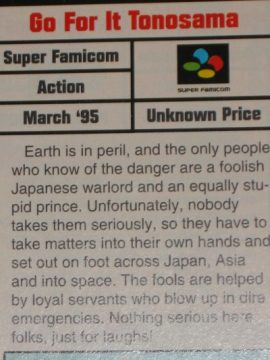 Perhaps this is because, in addition to the weird humor and obscure Japanese references, there are also cheesy homoerotic elements similar to the Cho Aniki series. The leads are effeminate dudes who turn into musclebound beefcakes, there are almost no female characters but a lot of burly and/or shirtless guys who sometimes make suggestive poses, and when you complete a level in super-powered mode, you get to see a hilariously creepy full-screen picture of the leads grunting and flexing… you get the idea.

This rare game can be found in box on auction sites for no less than $300, making it one of the more expensive retrogaming purchases. But is it really worth it? 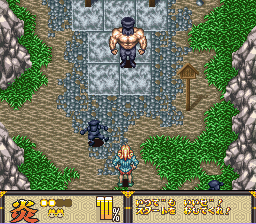 The story of “Tonosama” is set in feudal Japan and tells about a mysterious force (spoiler: aliens) that wants to rule the world, starting obviously enough with Japan. Shogun Tokugawa is soon possessed by this force, but luckily two noblemen, a Japanese one and a Western one, are going to save the day.

Too bad they are two huge morons! 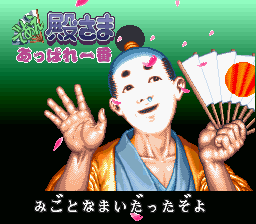 The happy-go-lucky son of a feudal lord, Baka-dono is only interested in playing and frolicking around, and this displeases the spirit of his late father, who comes back from the grave to possess him and give him some of his Herculean strength. Baka-dono fights with a tessen (Japanese war fan), giving him only a limited range of attack, but he is stronger than his Western counterpart. He partakes in teeth blackening (ohaguro) which makes him look like a Noh mask, which in real life was mostly reserved for married women. 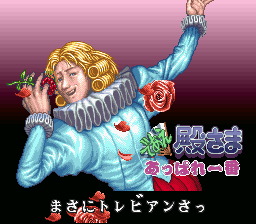 In this period in real life, the most prominent Western citizens in Japan were Spaniards and Portuguese, however French stereotypes are both funnier and easier to convey than other European ones. Baka-ouji is a foppish French prince who was shipwrecked on the coasts of Japan and gets involved in the quest to save the nation – and the world – from the evil invaders. Being a walking stereotype, he is a fan of ballet and thus more agile than Baka-dono – he is faster and hovers for a longer time. His weapon of choice are roses, a la Tuxedo Kamen from Sailor Moon, that can be shot in the four cardinal directions – they are much faster than the fan, but also weaker. He too can turn into his muscular late father. 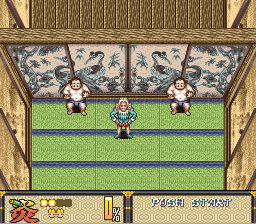 After choosing our stupid hero, the game starts with selecting the ninjutsu magic they will use during the levels: essentially, smart bombs based on four elements (fire, air, water, thunder). Baka-dono and Baka-ouji call their helpers to perform the magic for them – two improbably dressed kunoichi and a couple of burly ninjas for the Japanese, and two cute maids and a pair of old butlers for the Frenchman. The magic spells are all the same, only changing the animation and special effects (water floods the screen, thunder shoots lightning in eight directions, etc.)

The proper game begins with a map of Japan with four stages to choose from, which strangely already includes the boss level, but more on that later. The levels are all horizontal and vertical side-scrolling overhead shooting fares a la Pocky & Rocky, with the occasional forced scrolling and platform jumping sections. The graphical style is somewhat different than Taito/Natsume’s game, being less cutesy, a little more realistic and with more muted colors, still including some nice vistas such as rice fields reflecting the cloudy sky above or the corridors of Tokugawa’s palace. 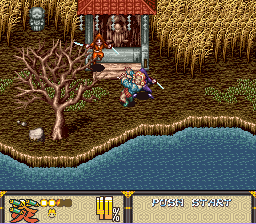 The two guys can attack, jump, make a short dash to avoid enemies and projectiles, and use magic by pressing the shoulder buttons on the D-pad (only after picking up the scroll icons). Both of them also have some special moves activated with beat-em-up style inputs, pretty useless since they take too long to be performed and aren’t too powerful. The fourth button on the pad is seemingly unused, since after pressing it the two guys will perform a silly stance, but its use will become apparent when you destroy some enemies and percentage icons such as “20%” will appear.

Picking these up refills the “TGR” (Tonosama Great) gauge that is used to turn the scrawny morons into their beefy fathers: if the gauge is 50% or more, pressing the fourth button makes the screen flash and begins a transformation that would make the Incredible Hulk proud. The two meathead daddies control in the same way as their sons, but they ditch the weapons and instead rely only on their literally blazing punches. 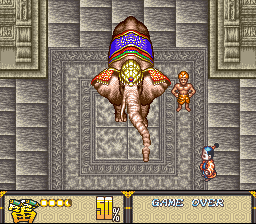 The characters seem endlessly powerful in this state, but be careful – every time they get hit, or you hit the punch or running punch button, the gauge lowers, until it gets to 0% and they return to their normal weakling appearances. So it’s important to continue defeating enemies to pick up icons and ensure that the TGR is always filled. The fathers also have a special “desperation move” in which they use up all of their remaining TGR gauge for a single ultra-powerful exploding punch, by pressing the button for the magic attack while transformed. Pressing again the transformation button just makes them flex their muscles.

It should be noted that the characters only lose energy when they’re in the normal state, since the dads lose just the TGR when hurt, so it can be wise to not transform until the bosses or the harder parts of levels, such as the aforementioned jumping sections. Baka-dono and Baka-ouji pick up food to replenish their energy, with the former preferring tempura and the latter castella (a kind of sponge cake). If they eat the food associated with them, they’ll regain half of the life bar, otherwise only a measly half-point of energy. 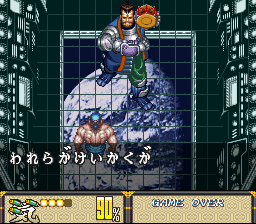 From a gameplay standpoint, that’s all there is about Deae Tonosama Appare Ichiban. The two characters have different abilities, but single player games will invariably see the use of Baka-dono, since agility is not at all important in the game. Mini-boss and boss fights have no real strategy to them, so brute force will always prevail over speed, and some enemies will remain in place when you pummel them continuously, making for easy victories. The only part of the game that can’t be resolved with socking everything in the face is the fairly annoying fight against a sultan on a flying carpet. He can’t be hurt directly and the only way to beat him is to hit the oil drums he rolls on the floor (no, it does not make any sense), usually after he burned us with his fire magic.

“TGR mode” is also ridiculously over-powered, since the fathers will be able to defeat bosses and mini-bosses in a matter of seconds, sometimes even with a single punch! They are also literal “meat shields” since they don’t lose life points (falling in water or in the abyss removes only 5% of the TGR) and can remove what little challenge already remained. The game is also fairly generous with percentage icons, and there’s also the matter of running to avoid enemies, the ・desperation” move, smart bombs and endless continues. All in all, this is a real easy title. There are no difficulty levels, but in the option screen, one can reduce lives and life points to be more challenged. However one can also adjust the TGR percentage just so that the game begins with the gauge already filled, up to 100%, and beating a level may become a trivial matter. 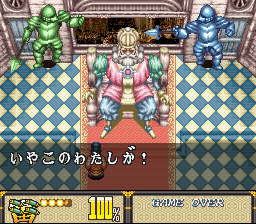 This title also has one of the most inexplicable decisions of all gaming: on the stage selection map one can go directly to the stage that houses the boss, with the added caveat of having to fight before him all the bosses of the levels skipped in this way. This is just absurd, especially since the bosses are perhaps the weakest part of the game, and it is far funnier to see what weird enemies and situations are present in the various stages. Japan can be completed in a few minutes if one sets TGR to 100% and blazes through the bosses with a few punches! The only thing that changes if all the stages are completed correctly is the appearance of a bonus stage, where you have to choose between two minigames: one has our heroes try to destroy the biggest number of falling onigiri to gain an extra life (useless since there are infinite continues), the other is a・Simon”-like test where you have to copy the poses of a body-builder with bunny ears (!) in the shortest time possible, in order to get enough points to increase the TGR gauge above 100%.

What redeems Deae Tonosama for a bit is the trademark Japanese bizarreness. The levels set in Japan are fairly tame – zombies aside – but after we punch the alien influence out of a Tokugawa Ieyasu (or “YEAHyasu” as the game spells it) outfitted with beams and rocket fists, Baka-dono and Baka-ouji set out to visit some heavily stereotyped foreign countries, in locales such as the Great Wall of China and a French court. The game puts them against the wackiest of enemies, including giant grasshoppers, cute witches surfing on brooms, Indians slinging plates of rice and curry, halo-throwing cherubs, flying women, modern day fencers, pandas armed with bamboo leaves, jiang-shi AKA Chinese hopping vampires, armored knights, levitating yogi who shoot laser beams and ordinary chickens. 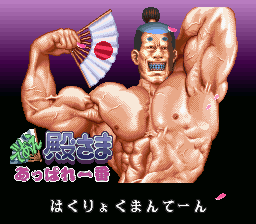 After the defeat of the sultan, his palace becomes a spaceship (!?!) and our stupid heroes are transported on Mars, where they beat the snot out of astronauts, Grey aliens, rabbits (a reference to the Moon Rabbit of Japanese folklore), the Flatwoods Monster and some giant Dogu (ancient statuettes that served as inspiration for Darkstalkers‘ Huitzil among others) with eye-beams before meeting none other than Oda Nobunaga (“NO-bunaga”, see they did there?), turned into a cyborg by the alien leaders in the hope of getting him to conquer Earth for them. And then you get to fight the alien mastermind and uncover its real identity.

Yes, it all sounds amusing but Deae Tonosama is simply not worth it. This game is a joke, and not even a very funny one at that. Too short, too easy, without real challenge, unbalanced and with other problems too. It slows down to a crawl when there are too many enemies on screen; the graphics are just average with barely animated sprites, with no Mode 7 or nifty effects. It’s pretty bad for such a late title. The music is bland and forgettable even when trying to imitate the melodies of the various world countries and, what’s worse, every time you play as the dads the BGM gets replaced with the crazy song of the opening screen, which is some kind of bizarre rap tune made with the undecipherable vocal samples of the game that becomes annoying pretty quickly. 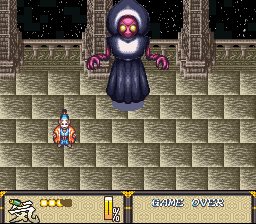 Deae Tonosama Appare Ichiban in the end is just a below-average Pocky & Rocky clone that needs to be bought only if you are a completionist and want absolutely everything that was produced for the SFC, otherwise it deserves the obscurity that surrounds it.

Links:
RVG Fanatic RVG Fanatic’s review, reminiscing when he first heard about the game.
YouTube An entire playthrough of the game, with added commentary by a Japanese-born person about the more peculiar cultural references.