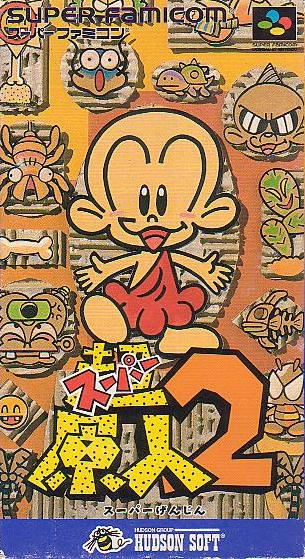 After the somewhat mediocre Bonk 3 and Super Bonk, this Super Famicom sequel is more like it. Super Genjin 2 – only released in Japan – is a return to form, with levels that more closely adhere to the original TurboGrafx-16 games. It’s also received a beautiful visual overhaul. Although the sprites are technically a bit smaller than the previous outings, the stages are much more colorful, consisting of a brighter color palette and unique background designs. Many of the background tiles are angular, making it look like you’re adventuring through a garden of pristine stained glass. It’s a nice alternate take on the storybook-style visuals found in Yoshi’s Island. 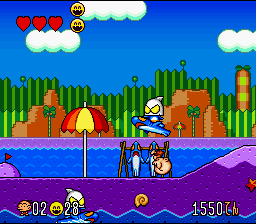 These changes do a lot to inject a bit of life into the stagnating visuals of the previous games, but it’s more than just that. The Giant Bonk and Tiny Bonk power-ups have been ditched, and instead, there are three different forms you can turn into when you eat a piece of meat. The Ballerina form is much like the girlish, make-up wearing ability found in the Japanese versions of Bonk’s Revenge and Bonk’s Big Adventure, although here it also lets you double jump. The Thief form from the Game Boy version of Bonk’s Revenge also returns, allowing you to throw smiley faces like shurikens and bury into the ground. There’s also a Drill form which attaches a drill to your head and allow you to bore through certain rocks. In your angriest form, Bonk can cause waves of fire by smashing his head on the ground.

The Smiley Faces just give extra lives, but you can still access bonus stages by finding flowers. Here, you can take on a number of Bonk’s other forms – in addition to the Ostrich form from Super Bonk and a new Lizard form, you can turn into a tank with a freakish Bonk for a head – as you roll through a city and ruthlessly destroy buildings, each of which reveals a banner decrying your vicious deeds, pleading for you to stop or calling you a monster. 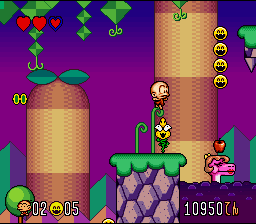 The levels themselves are much more interesting too. In one graveyard level, you’re turned into a zombie as soon as the stage begins, with your soul floating in the upper corner of the screen. You wander through the stage as the undead, eating fruit until eventually you restore your life and get your body back. In another level, you bite onto the main rotor of a helicopter (which looks like a pig for some reason) and rotate around, acting like a blade and allowing you to fly over the landscape. There are still a few anachronistic levels, like the Wild West stage, but when it’s filled with enemies like alligators who wear giant cannons on their crotches, it’s definitely forgivable. With touches like this, it’s easy to see that Super Bonk 2 has regained the crazy inspiration that initially made the series so likable.

Additionally, each level has a number of hidden specialty items, which will deal extra damage to bosses before you fight them. Naturally, the more you uncover, the more damage you’ll do. Finally, you’re sent back to a checkpoint whenever you die instead of resurrecting where you perished, so it’s a bit less easy than some of the other games. 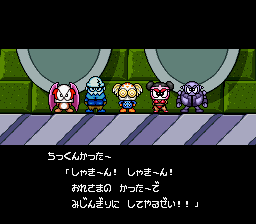 The designers finally realized that the bosses of the previous games were totally missing the personality found in the original Bonk’s Adventure, so here you fight against a team of five eggshell helmet-wearing dinosaurs, each of whom pilot a unique machination and pop up at the beginning of each stage to taunt Bonk for a bit. There’s also a world map, although it just exists to show your progression through the stages and doesn’t allow you to select levels. Even though the game isn’t terribly long, there’s a password system to track your progress.

Even though it was passed over for North American release, Super Genjin 2 is still an excellent title, one that’s usually forgotten because it’s not on an NEC platform.