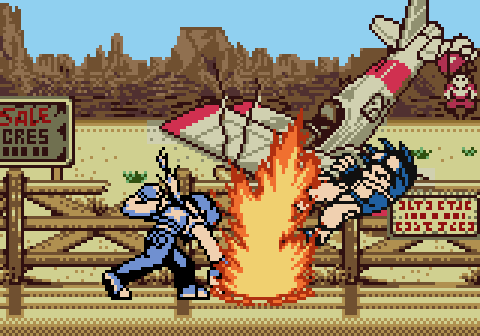 Fatal Fury: First Contact was developed at least in part by Yumekobo, who were also involved with SNK Gals Fighters. It plays pretty much like the Real Bout games. The character roster is most similar to that of RBFF2, only smaller and with an original character named Lao available in two player mode and Alfred becoming playable after beating the game. Characters who have been removed are: Bob Wilson, Sokaku Mochizuki, Cheng Sinzan, Hon Fu, Tung Fu Rue, Duck King, Blue Mary, Jin Chonshu, Laurence Blood, Jin Chonrei, and Franco Bash. Once again there is no plot whatsoever.

Fatal Fury: First Contact is not completely identical to the Real Bout games, but there are very few changes to the gameplay. This similarity is even noted in the intro animation where the phrase Real Bout is flashed on screen. The most noticeable and significant change is that the line sway switching system has been removed. However, that doesn’t mean that there are no means to avoid an opponent’s attacks, as it’s still possible to counter attack by pushing A and B at once before being hit. The dash, back hop, short jump and recovering from knockdowns are all retained, but it’s no longer possible to perform a long jump. All the other moves and rules – like Breakshots, H. Power, P. Power Supers, and S. Power Supers – still apply. As far as controls, quickly tapping either of NGPC’s two buttons will execute a kick or a punch, and holding either button will result in a third attack that’s identical for both buttons. 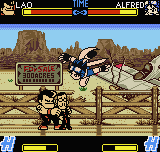 Most of the sprites are taken from other Neo Ggeo Pocket Color fighting games. Every composition is taken directly from the Real Bout games and rendered in tinny 8-bit synth. Likewise, each background directly recreates backgrounds from the Real Bout arcade games. It does this amazingly well, and it’s pretty cool to see them redrawn for this hardware.

Neo Geo Pocket Color cemented beyond a shadow of a doubt that one could make a fighter for a 16-bit portable console that stands up to any game in the genre, and First Contact is among the best portable fighters ever made. Even without a second player to play with, it’s well worth looking at for just to be able to busta the CPU’s woof while on the go.