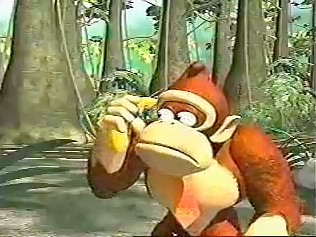 Something major was happening in the ’90s: 3D and computer generated graphics. Everyone was racing to create 3D games and television joined in. Reboot and Beast Wars: Transformers were huge successes, and other shows followed their model, mistakenly thinking their success was garnered by state-of-the-art animation rather than good writing. So for Donkey Kong Country, having been one of the forerunners of the 3D games movement with its pseudo-3D animation that achieved immense attention at the time, it only made sense that if one were to make a show out of it, it should stand on the same cutting edge. Donkey Kong Country 3 had come out the year before and there were no games on the horizon, so for a young fan of the SNES games waiting for the inevitable Nintendo 64 successor, the Donkey Kong Country TV series would carry them to 1999 and a little bit beyond. 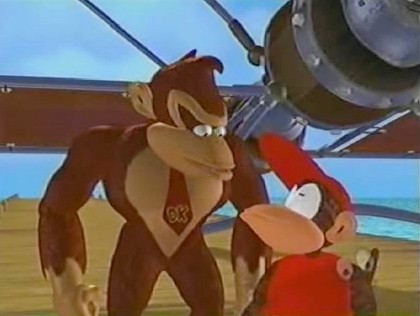 And so, it was in this context that Donkey Kong Country was released. Created by a French/Canadian team in 1996 and localized for American audiences in 1997 when it premiered on Fox Kids, it utilized CGI animation similar to shows like the aforementioned Reboot and Beast Wars. It ran for two seasons and 40 episodes, and though fairly successful in its territories of origin and in Japan, it didn’t make a very big splash in the US.

The visuals, as one would expect from a 3D cartoon from the era, have aged badly. The character models look roughly like they did in the video games, but have a cheap, shoddy look to them, and the animation doesn’t fare much better. Most characters look similar, except Candy Kong, who was given a complete redesign and looks much, much less feminine.

The problem isn’t that it’s hideous and callow. It’s just that it’s wrong. The show is episodic and follows a sitcom format. Episodes typically introduce an issue that’s resolved by the end of the episode, and those issues may or may not have anything to do with the events of the video games; and therein lies its biggest problem. It just doesn’t feel like Donkey Kong Country. 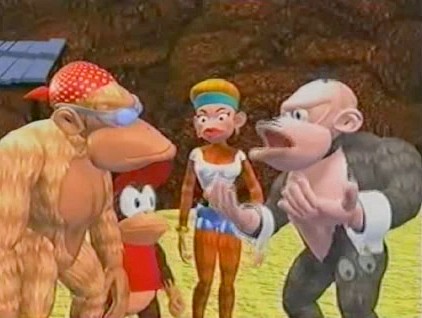 One would imagine Donkey Kong Country show to have more of a sense of adventure. Something more along the lines of a TaleSpin or Rescue Rangers. The game is about a bunch of apes striking out across a vast continent in search of their pilfered bounty of bananas and to rescue kidnapped relatives. Surely, they could’ve cranked out something with a little more swashbuckle than a second-rate Super Mario Super Show.

Though for a long time there were only ever a few sparse episodes released on VHS, there have been some DVD releases to include more episodes.