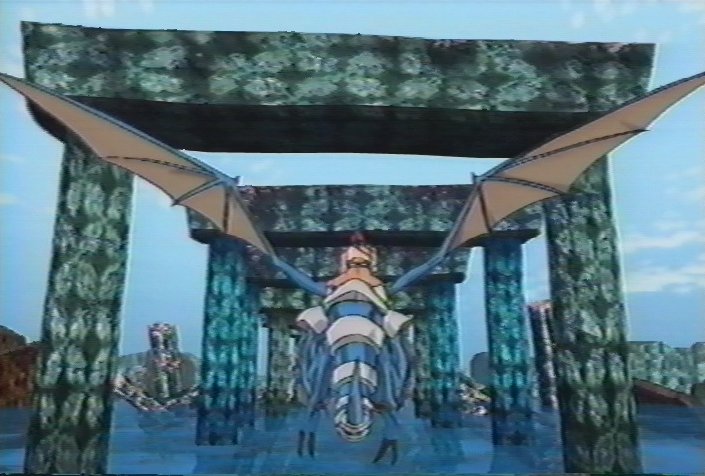 Panzer Dragoon got its own anime in 1996, which was translated and brought to the States by ADV. It is, as one might expect, pretty bad. It’s only a single episode OVA that clocks in at about twenty five minutes. So even if you paid $3 to rent it back in the day before Cartoon Network showed anime non-stop, then you’d probably feel ripped off.

The opening sequence is pretty much like the intro to the video game, with two friends hunting for scorpions in the desert. Except our hero Kyle (mistranslated from “Keil”) has a blind girlfriend named Alita, who is apparently “in tune” with the monsters or something. Anyway, an evil black dragon flies by, kills Kyle’s friend, kidnaps Alita by absorbing her into its body, and takes off. Another dragon, whose rider has been killed, takes up Kyle and chases the black dragon, to not only stop it from reaching the tower, but to save Alita. 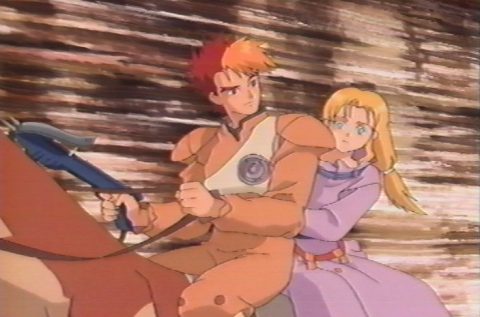 So. On the journey, they run into some Empire ships, which the dragon destroys despite Kyle’s general anti-violence stance. They land on the ground and set up camp, finding a sole survivor amongst the wreckage. Kyle tries to comfort the Empire soldier, who then ends up turning on them. After this needless interlude, Kyle and his dragon fly through a couple segments lifted practically straight from the game (from stages one and four – one of the shots is a pretty clear homage) before getting to the Tower. The dragons fight, and Kyle saves Alita. Then the spirit of the dragon speaks to Kyle and convinces him to “combine forces”, which allows him to throw a super hadoken or something and save the day. Then Alita gets her sight back and everyone lives happily ever after.

It’s hard to develop attachment for character in only one episode, but all Kyle seems to do is yell is his dragon for not listening and whine about saving his dear Alita. The lackluster plot isn’t saved by the visuals either. A few of the segments – notably the intro and any shot with the Empire ships – are rendered with computer graphics that looks reasonably like the models used in the game cutscenes. For the time, they weren’t too bad, but it greatly clashes with the hand drawn characters, so it isn’t even all that visually appealing. Which is really shameful, given the richly detailed world of Panzer Dragoon, which could have been brought to life in the hands of a better animation studio. The action scenes aren’t that particularly good either. Similarly, the music is lacking – the main theme seems to borrow a bit from the Saturn game, but most of the soundtrack is rather lousy. 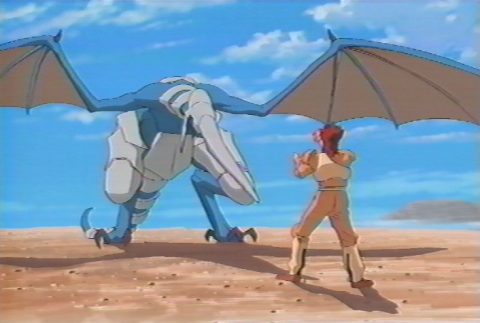 It’s only out on VHS, but it’s not worth bothering with unless you’re a massive Panzer Dragoon fan.