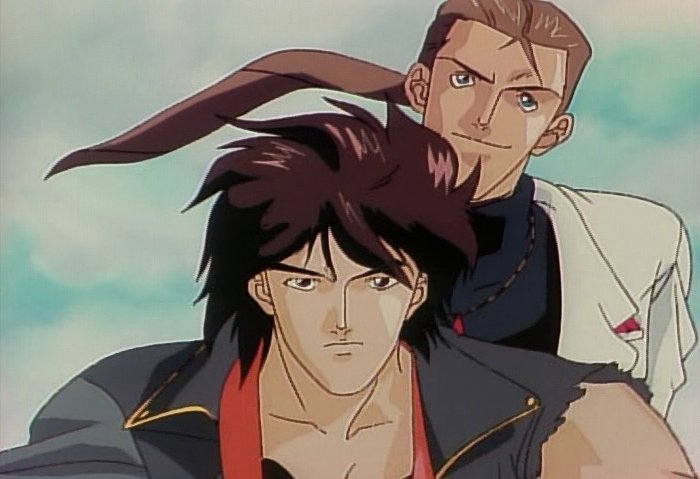 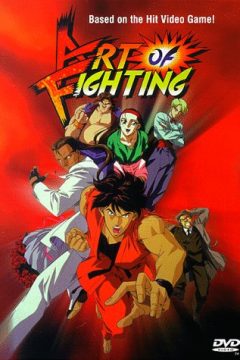 Pretty much any fighting game in the early-to-mid ’90s got its own anime OVAs, be it Fatal Fury, Tekken, Battle Arena Toshinden or Samurai Shodown. Art of Fighting was never quite as popular as any of these, but it was apparently well known enough for a single 45 minute OVA to be produced. And somehow, despite the fact that most of its fighting game brethren anime are pretty awful, Art of Fighting stands out as one of the worst of the worst.

The plot begins with Ryo chasing a cat on a precarious ledge on the outside of a building. Why? Because Ryo is dirt poor, apparently, and needs the cash. Robert drives by in his car and starts making fun of Ryo, who then falls off to his apparent death. Then Robert jump kicks Ryo in mid-air, which somehow causes him to land safely. So it’s already off to an amazingly terrible start.

Ryo and Robert end up following the cat into an emptry apartment, where they end up witnessing the murder of some chump. Said chump apparently knew the location of a valuable diamond, which Mr. Big and company are desperately seeking. Ryo and Robert manage to escape the scene and fend off some thugs, but Mr. Big eventually tracks down Yuri and kidnaps her, hoping to lure the two heroes out of hiding. There’s a fight scene at a casino, and a fight scene at Mr. Big’s mansion, and that’s pretty much it. Outside of Ryo, Robert, Yuri and Mr. Big, Jack Turner and John Crawley star as two of Mr. Big’s thugs. King also makes an appearance as one of the more compentant bad guys, although here it’s explicitly known that she’s a woman, and she flirts quite a bit with Robert. There’s also a loony police chief that somehow forces his way into the action.

Other than seeing the characters in animated form (the only reason these type of programs exist to begin with), there’s very little redeeming about the Art of Fighting anime. The character designs are uniformly awful – Ryo had black hair, Robert has brown hair, and Yuri looks like a generic shoujo manga reject. The artwork in general is appalling, and the few fight scenes (which one would think would be the focus of an anime called Art of Fighting) are quite dull. But worst of all, the characterizations are just completely stupid. As vide game characters, Ryo and Robert were never given much personalities, but here Ryo is a destitute bum who’s in constant threat of having his electricity shut off, and Robert is a sleazy womanizer lacking any semblance of charm. About the only aspect that’s passable is the music – while forgettable, at least the jazzy rock is faithful to the SNK style.

Art of Fighting was released on both VHS and DVD long after the popularity of the games had faded by US Manga Corps, a division of Central Park Media. The voice dubbing is awfully subpar, but it’s not like decent acting would’ve saved this title anyway.