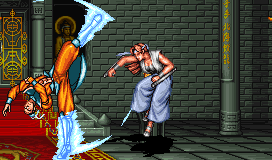 By the mid-nineties, belt-scrolling arcade brawlers where just kind of over, which makes it understandable that Technōs final attempt in making the series relevant again also jumps on the 1-on-1 fighting game bandwagon. Apparently someone at Technōs was actually excited about the Double Dragon movie, and thus this game ties in with it, albeit very loosely. Aside from a short clip in the intro and a few still images in the arcade stage, the identifiable references are limited to the boss being named Shugo, Abobo’s design (his mutation here is temporary and part of his special moves), the imagery of the amulet and the Lee brothers transforming into their stronger versions, Super Saya-jin style. 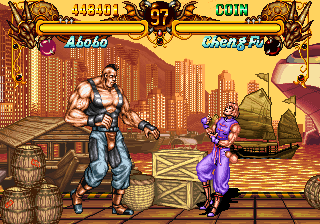 For the most part, the game is a very by-the-numbers iteration on the Street Fighter II formula, to the extent that Billy and Jimmy are turned into the obligatory shotoclones with the usual energy ball, uppercut and spin kick special moves. The gameplay feels noticibly faster and smoother than most Street Fighter titles and other fighting games at the time. The two features that make the gameplay stand out a bit are the fact that special moves apply to all attack buttons, no matter if they’re punch or kick based, and a rather unique “charge” move system, which combines features of the standard super move and desperation meters: As players dish out damage, they build up a blue energy meter, but it overlays on the standard health bar from the opposite site of the red damage indicator. Once the blue and red parts meet, an indicator starts flashing to announce that the strong charge moves are now available, so this happens a lot faster the less health you have left.

In its presentation, Double Dragon is a true Neo Geo game. It starts with a furious intro accompanied with a fun, poppy remix of the familiar Double Dragon theme while showcasing screen-filling concept art of the characters flashing by in between quick in-engine fighting scenes, and it all culminates with the Lee brothers turning into red and blue spirit dragons flying into the foreground to summon up the Double Dragon logo. Some sprites like Abobo and Burnov are huge, and the camera zooms out when the fighters get far away from each other, like in Art of Fighting or Samurai Shodown. 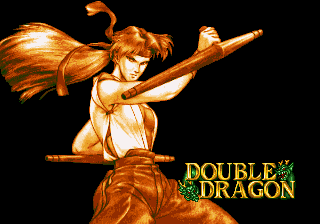 Each stage has many destructible objects and other visual gimmicks. For example, if a fighter is juggled against the ceiling in Abobo’s sewer stage, a subway car comes crashing down from above. The most impressive stage is ninja Amon’s arena, which takes place on the wings of a vintage aeroplane, which flies through a canyon with the rock walls on both sides rushing by like in a Sega Super Scaler game. All the combatants also have individual entrance animations for their own home stages – in the Lee brothers’ dojo, the host is seen sparring with a generic martial arts guy, before the challenger jumps in and kicks him away, newcomer Rebecca leaps down from a burning building in the background, and of course Abobo comes in smashing through a wall.

The game was ported into a version for the PlayStation, which remained exclusively in Japan until Monkey Paw Games published it on the American PSN marketplace as is, with the win quotes, endings and options in Japanese. It does a valiant job at retaining the visuals of the original. Only the intro was completely replaced to feature mostly a montage of scenes from the movie, with the character portraits now in color, but in FMV with ugly fragmenting. The video is much slower paced compared to the Neo Geo intro, and accompanied by generic hard rock music instead of the iconic Double Dragon theme. 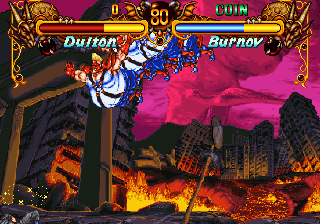 The PlayStation version also adds two new modes: Over Drive Mode inserts a simple priority pattern into the game by which moves cancel each other out based on the button pressed to use them. Tiny 3D Mode is tiny in two senses of the word: It only lasts one fight in the city streets stage before going back to the main menu, and it uses a tiny zoomed-out view of the game – at least until you mess with the camera. In this mode, the stage is transformed into a 3D diorama. It still uses the same 2D elements, but some background elements stand out before others as you pan, turn and zoom the camera around within certain bounds. It doesn’t look good, it doesn’t add anything to the game and there’s not much of it, so it seems it was meant more as a gag rather than a serious feature.

While the Double Dragon fighting game is neither particularly substantial in its mechanics, nor innovative enough to reserve it a place in the canon of great video games, it certainly is a great spectacle and a pure celebration of 2D sprite special effects. It is also much more playable and enjoyable than Double Dragon V.