While Technōs let others make Double Dragon 3 for arcades, the NES version remained an in-house product. The result is much more worthy of the Double Dragon name. It still tells the same story of world travel in pursuit of the Rosetta Stones (which are renamed to Sacred Stones in the English version), but at least it provides a motivation for the Lee brothers by letting Marion get kidnapped yet again – but only in the English translation. Despite the similar premise, it differs the most from its arcade counterpart among all three NES games. 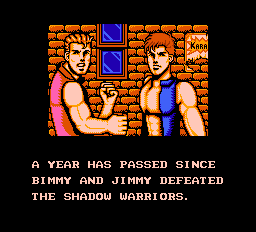 From the beginning, The Sacred Stones proclaims its affiliation with the series roots by booting to a new remix of the classic Double Dragon theme, which was painfully missing from the arcade game. The stages don’t have much in common aside from the general themes, and the controls feel very much in line with its predecessors, though the punching and kicking animations feel a bit different than Double Dragon II.

The standard grappling moves are back, and the handstand throw is the only move taken over from the new attacks introduced in East Technology’s game, but there’s no need to buy upgrades to access them. The Lee brothers are able to run quickly by double tapping like in the arcade, but the input for this isn’t very responsive and there aren’t any attacks to link into anyway other than long jumps. You can bounce off walls to jump kick, or even jump in your partner’s arms and have them fling you across the screen. The enemies can cooperate in the same manner, of course. 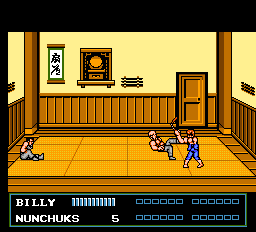 While the players always start as Jimmy and Billy – or Bimmy, how the intro infamously misspells him – the companions from the arcade game appear as bosses, and two of them join the team after they’re defeated. Chin Seimei remains exactly the same, but the Oyama brothers of Karate fighters are replaced by the ninja Yagyu Ranzou, whereas big guy Roney Urquidez – or rather an unnamed character who looks just like him – apparently didn’t fit on the character select screen, and he is not playable. Once the additional fighters joined the cause, it’s possible to switch characters from a pause menu at any given time. Some bosses can be ridiculously easy when timing Yagyu’s shuriken right so they never get a chance to properly stand up again, but in general Billy and Jimmy’s spinning kick is the most effective move in the game because it has a far reach and gets rid of opponents on both sides. It’s executed a bit differently than Double Dragon II though – you need to jump straight up to execute it rather than leaping forward.

Weapons can once again be picked up after disarming enemies, but the broken bottles and sai are only good until its previous owner dies. Fortunately each character also comes into the fight with his own special weapon. Billy and Jimmy can pull out their trusty nunchucks, while Chin Seimei has a nasty steel claw, all three of which can be used five times per stage. Yagyu always wears his katana by default, but can also throw shuriken, drawing from a stock of 20. 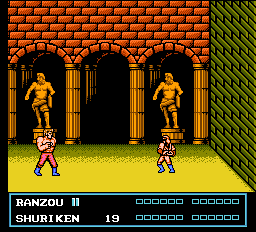 When it comes to presentation Double Dragon III is easily the prettiest among the three NES entries. It has some really neat 8-bit pixel graphics for backgrounds and features a decent variety of evildoers, who keep appearing in later stages in contrast to the arcade game. It is also the first NES game in the series that manages to put two different enemy types at once, although the flickering when all four on-screen characters occupy the same scanline is from another dimension.

The big problem with The Sacred Stones is the absolutely brutal difficulty for a single player, especially in the beginning. Enemies are tough, numerous, and aggressive, and each character gets exactly one try – there are no extra lives and no continues until you get to stage 4, where you are thrown some breadcrumbs in form of a single credit. The Japanese version gives the characters a few more health points and reduces the amount of adversaries, but that doesn’t help much. 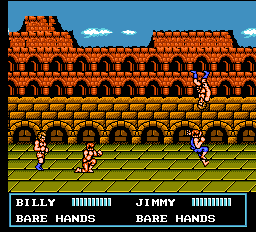 When playing alone, it’s incredibly difficult to get past the first two stages, after which it ironically gets much easier because the companions have separate life bars. But when a character is out of the game, you never get him back, so it’s always best to switch when someone is low on health. This odd difficulty curve doesn’t even seem intentional, as the difficulty early on is much more moderate with two players. It’s still one of the harder games in the series, but at least it’s manageable. The problem could have easily been mitigated by allowing solitary fighters to switch to Jimmy when things get rough, but as it stands, the single player mode is almost unbeatable for most normal players.