Double Dragon started out strong, but the next few sequels didn’t really take the chance to evolve much. In fact, most have been a step back from the original, so it didn’t take long for the series to fall into irrelevance. Only when Technōs’ successor Million brought back Billy and Jimmy for the Game Boy Advance, the series managed to connect to its former glory. Even though it technically is a remake of the first game, in many ways Double Dragon Advance shows the direction the series should have moved towards after its inception. The result is pure beauty. 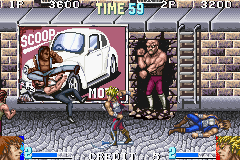 Double Dragon Advance features all the moves from the arcade game, with its separate punch and kick buttons, jump kicks, holds, elbow checks and headbutts. On top of that, it cannibalizes and remixes elements from the sequels to expand upon it in many meaningful ways. Like in Double Dragon 3 – or any reasonably modern brawler – it’s possible to dash forward by double tapping the D-Pad, but here it leads to a whole range of new attacks depending on the buttons pressed, including an awesome roundhouse kick. From Super Double Dragon comes the ability to intercept opponents’ attacks, although here it translates directly into a throw when catching a blow at just the right time. Otherwise the move turns into a standard block – a first for the entire series. Not taken from any former game (but possibly derived from the NES version’s jumping mechanic) is the most useful new maneuver, which is performed by pressing both attack buttons together. This lets the brothers kneel down, which not only serves to avoid some attacks, but also lets them prepare an uppercut or a jumping strike with their knees. 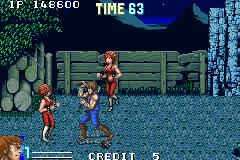 If an enemy is finally down on the floor, the Lee brothers can go after the hoodlum and rain down punches or jump for a nasty stomping attack – if they remain undisturbed by the many remaining adversaries, that is. The arcade game never threw more than four enemies at the player at once, and even then suffered from slowdown that made things a little easier to handle, but here the number is up to five on a significantly smaller screen, and the game always runs fluidly.

Some moves and weapons used to be a bit overpowered the old game, but now you actually have to make use of all your tricks, as the AI is better suited to counter former exploits. There are also new enemies that necessitate new tactics, like secret agent types in suits who intercept your attacks and counter with mean fast punch combos. 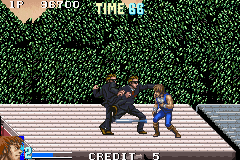 As usual, there are several ways to use the environment to your advantage. In addition to kicking around barrels by aiming low with the feet like in Super Double Dragon, the Lee brothers can perform wall jumps to get out of a tight spot. There are also a few new weapon types, including axes, short fighting sticks and the nunchucks that were so sorely missing in the original game.

At first Double Dragon Advance seems like a straight remake of the original, but from the end of the second stage things start to turn out very differently. Instead of the Lee brother clone Jeff, the boss of this area is Burnov from Double Dragon II, and after it follows an entirely new China Town stage, guarded by two Chinese kung fu fighters. This is followed by a brutally hard fight on top of a truck (Super Double Dragon sends its regards again) and a pack of swordfighting samurais. After that, the game branches back into familiar territory, but the final stretch is expanded with a cave section and a whole new entry aread of the villains’ hideout with new traps. To get into Willy’s chambers, Billy and Jimmy have to defeat the Five Emperors of Gen-Setsu-Ken, superior martial artists with superhuman abilities. They only fight two at a time, but several of them can divide their bodies to make you feel you’re up against a crowd. These fights are a lot more exciting than the final showdown with Willy, so it feels a bit weird to have the actual climax frontloaded like this. 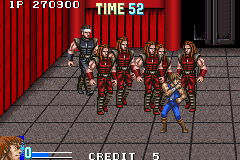 Overall, the quest is now roughly doubled in size. But not only that, by inserting dialog cutscenes after each boss fight the team finally managed to implement a vision that has been looming around behind the scenes since Super Double Dragon. It’s just the usual banter of trying to get information of the big bad’s whereabouts out of the defeated, but its neat to have at least a little context as to why you’re beating all these people up.

After beating the game, you can also try your skills in a survival challenge, which just keeps throwing foes at you in an arena. The game can be played together with a friend via a link cable, but aside from the standard “1P Dragon Game” there’s also a very odd “1P Double Dragon Game” mode, which lets one player switch back and forth between both characters by pressing select. There’s no AI control in this mode, so the other brother always keeps standing still until you switch control, making it next to impossible to play very efficiently in this mode. 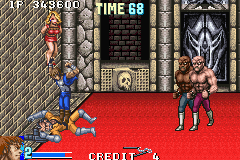 All its improvements and expansions make Double Dragon Advance clearly stand out as the best of the traditional series entries. For fans of Konami’s and Capcom’s nineties arcade brawler output or modern multiplayer mayhems like Castle Crashers and Scott Pilgrim vs. the World it may still feel a bit too old-fashioned, but there is no game that distills the slow-paced, methodical old school formula into a more wholesome mix than this.