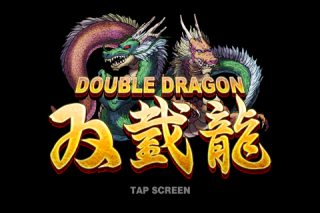 The Double Dragon mobile port was developed by Brizo Interactive, the same team which worked on the Zeebo port. While it shares some of its elements, it’s largely an all new product.

Most of the sprites from the Zeebo port have been reused, though the animation isn’t as smooth nor is the action quite as fast. The backgrounds have been redrawn and they look much improved. However, everything appears smaller due to using the higher resolution of mobile phone/tablet screens. The on-screen touch controls also chew up a significant portion of the playing field, so it feels a little cramped despite the zoomed-out view. The touch controls, as usual, aren’t great. But it does offer controller support, though you still can’t completely deactivate the overlay. 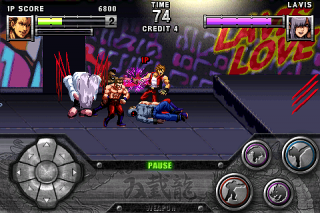 There are two control methods – manual and auto. Auto simplifies all attacks into “regular” and “special”, with combos executed automatically. Manual has separate punch and kick buttons, though there are special moves you can execute in manual that aren’t available in automatic. There’s an additional special meter that will build up and activate a “limit break” to temporarily make you more powerful. As you progress through the game, you get experience points, which unlock new moves. Much like the Zeebo port, you can also unlock and play as every enemy character in the game – there are 26 characters in total.

Once again there are two levels not found in the arcade game, but they are totally different from the Zeebo port, taking place in a school and a nightclub. All of the original arcade levels are present too, though many of them are shortened again. With the new levels come new enemies and some added boss characters – Lavis, the white-haired woman with the black dress and fur coat, returns from the Zeebo game, while Deena, a hip girl with a bikini top and headphones, is entirely new. Like Double Dragon Advance, Burnov also shows up as the second level boss. 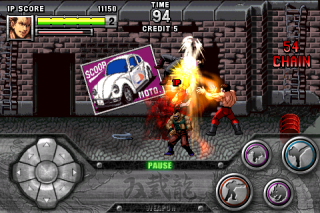 All of the artwork is new too, drawn in a modern manga style. There are dialogues with bosses, pre and post-fight, like Double Dragon Advance, though these are often quite cheeky, and resemble the dialogue of an SNK fighting game. A running gag is that most of the bosses seem to be hitting on Billy and Jimmy (even Burnov) which leads to lots of goofy innuendo.

There is a two player mode over Bluetooth, but no wi-fi. The streamed music suffers from low bitrate, but all of the arrangements are pretty good, far better than the tinny MIDIs of the Zeebo port. 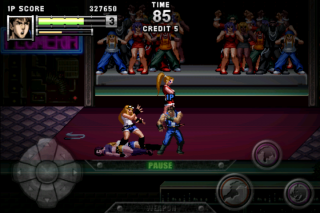 Overall, if you can play with a real controller, the mobile Double Dragon port is surprisingly decent – it’s not as solid as Double Dragon Advance, but it still plays incredibly well, looks great, and there’s a lot of content for those who want to put in the effort unlocking it. But be wary when buying the Android port – it has extremely spotty compatibility, and even when Google Play thinks your device is compatible with the game, it might still not run at all.