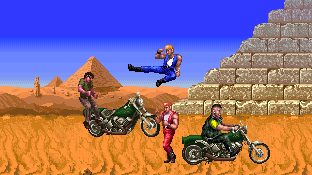 The Rosetta Stone is regarded as the point when Double Dragon started to go astray – both thematically and in terms of quality. It was the first game in the series that wasn’t developed in-house by Technōs – instead it was outsourced to East Technology. It doesn’t appear that the company had much experience with the genre at the time, and it shows.

Double Dragon II might have been a little too similar to its predecessor, but the third game differs too much instead. The plot now revolves around three mystic stones – singular in the title be damned – for which the Lee brothers are sent all around the globe by an old fortune teller, who of course turns out a traitor at the end. 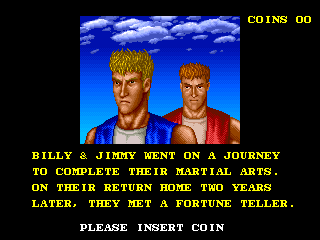 After an introductory stage with the typical New York like urban setting, the journey takes the heroes to a forest in China, a martial arts dojo in Japan, a Coloseum in Italy, and hidden underground chambers beneath the pyramids in Egypt. The traveling aspect allows the background artists to become a lot more creative with the surroundings, but in exchange every stage now has only one or two enemy types, which never appear in any of the other stages. While the roster starts out genre-typical with hoodlums, kung fu fighters and samurais, Italy is entirely populated by half-naked archers, and in Egypt things get supernatural with fighting tree stumps, animate statues and the mummy of no one less than Cleopatra, who seeks to use the Rosetta Stones to return to her human form and rule the world with her black magic. 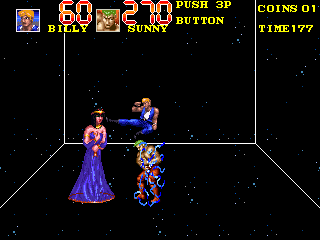 The gameplay vastly differs from the established style as well. The moveset feels rather closer to Renegade than Double Dragon. There’s no headbutt or elbow blow, but it’s possible to stomp on downed enemies, or run across the screen and leap for a diving headbutt. It’s also possible to dash towards a wall and then use it to violently propel yourself into the enemies. When upgraded, the heroes can also make a one-armed handstand on an enemy’s head and do a back suplex, while the regular grappling moves are all missing. A cool new addition is the team-up move where both players can link their arms back-to-back and jump up for a spin kick with twice as many feet to hit enemies with.

The one thing Double Dragon III is famous-infamous for, is its invention of micro transactions – and that’s in a medium that’s already predisposed towards sucking ever more quarters out of players. At the beginning of each of the first three stages, the Lee brothers can enter a shop, which sells upgrades for actual money. For a quarter each, you can buy “Extra Guys” – additional characters that jump in when you’re defeated. They look completely different from the Lee Brothers – a karate guy, a fat guy in a stereotypical Chinese suit and a large burly guy – but have the same set of moves, albeit with changes in timing and ranges. Other buying option include “Tricks”, which unlocks the two head stand grapples and the spin kick move, “Weapons”, “Energy”, and “Power Up”. 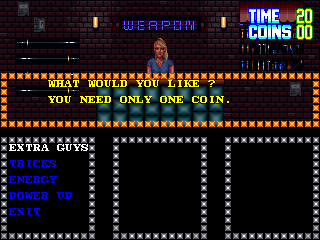 Without upgrades, a game can be over extremely quickly, as Billy and Jimmy have only one life per credit. The initial amount of health points at 230 looks large at first, but a single enemy attack can subtract more than 30 from that, so if anything the heroes are more fragile compared to previous games.

Unfortunately, even though the game is balanced for the players to have all these upgrades, but since each of them costs a quarter, most aren’t even worth bothering with, since they are of less value than just paying for another credit. Some of the companions have more life points or deal more damage than the Lee brothers, but since they require to get used to completely new parameters for your moves, most players will perform much better with the standard heroes.

The only purchase worth contemplating are the weapons, which are just as mighty as in previous games. The first shop doesn’t have any weapons available, but you get nunchuks in China and a katana in Japan. Especially the katana is a lot of fun, as you can clash together swords with the warriors that populate that stage, but they’re gone once you’re defeated and use a credit. There are no weapons to pick up in the stages. 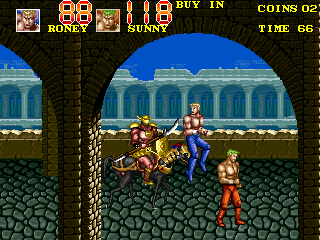 Once you’re unarmed, most enemies and especially the bosses have wider reach, faster attacks and higher priorities than the players, and the final two stages don’t even have a shop to buy weapons to begin with. In contrast to the earlier games, enemies are super aggressive and always in pursuit, so most of the time is spent trying to avoid getting swarmed from all sides. That’s easier said than done, because the characters jerk around the screen in coarse chops, as if this was an old MSX1 game. The scrolling, on the other hand, is perfectly smooth, so apparently this somehow was intentional? At any rate, it renders the game almost unplayable.

It doesn’t take long before the dash attack remains your only viable move of dealing with most enemies. If you’re playing alone, you might as well just give up once you reach the ninja at the end of the Japan stage, or waste quarters spawning player 2 as a decoy for the three incarnations he spawns, because otherwise there is no escaping from them.

The Rosetta Stone started a little Double Dragon tradition where the Japanese version received a significant revamp from the American release. The whole powerup buying feature is gone, and instead you have all moves at your disposal from the beginning, while weapons can be found on the ground in the applicable stages. The alternate characters are still in the game, although here they’re selectable from the very beginning, which makes a lot more sense. For some reason the initial stage skips the first screen with the shop, while they’re simply non-interactive in the other stages. The Japanese version also allows a third player to join, for which an extra Lee brother (“Sonny”) was invented. All other characters likewise appear in a triplet of brothers, even though it is implied that they were originally meant to be individual characters, before someone decided that all players should be able to choose the same guy. 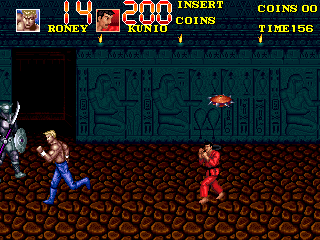 What the Japanese version cannot fix, however, are the shoddy core mechanics. At the end of the day, Double Dragon 3 is just as badly designed as it is implemented. While the motorcycling goons that need to get kicked off their bikes are a neat idea – lifted directly from Renegade – the archers and swordfighters are extremely annoying. The stages offer little deviation aside from an Indiana Jones style puzzle room where you have to step on the floor plates that spell “ROSETTA” from the only latin characters among a bunch of “hieroglyphs”. The Saturday morning cartoon plot and graphics that cater heavily for an American audience throw everything out the window the series had going for it in terms of indvidual style. With that, it set an unfortunate precedent for the direction Double Dragon licensing would take for most of the nineties. 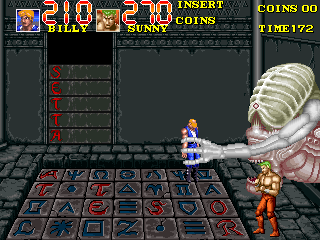 The only half-decent home port comes for the Genesis, ported by UK-based studio Software Creations. At least it retains all fighting moves and fixes the horrible choppy movement. On the downside, several animations were cut – running now looks exactly the same as walking – and none of the attacks really feel like they connect. The shop system is still in place, although you get 15 coins to spend in the beginning and can earn additional coins while playing. 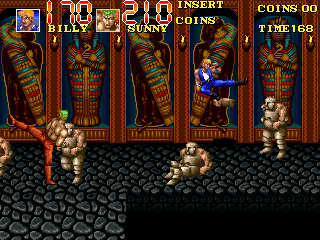 The various computer versions are prime examples of cynical cash grab ports, as clearly no one involved could give a damn. They do feature smooth movement, but lack any music and don’t even bother trying to adapt the controls to a single button scheme and just leave out all moves except the standard punch and kick, only with the additional spinning kick to justify the “Tricks” purchase. The 8-bit versions further reduce the amount of coins available and are unbearably slow.

While it does feature music, the Game Boy port is just as miserable. The moveset is stripped down here as well, and even the additional characters are missing. Instead you just get to buy extra lives at the shop, but you only start with two credits.

The NES version is a completely different (and better game) that is reviewed in the next article. 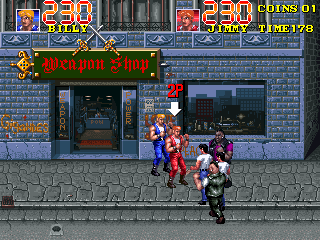 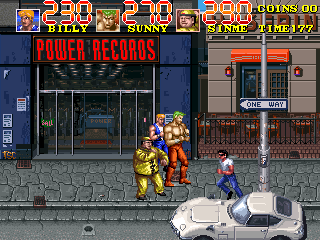 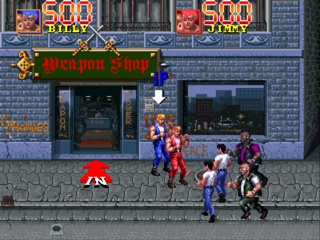 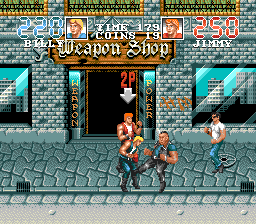 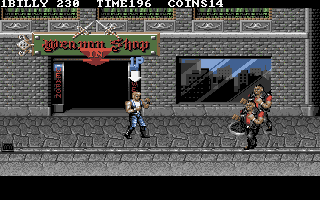 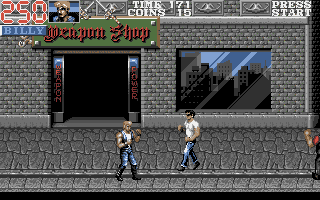 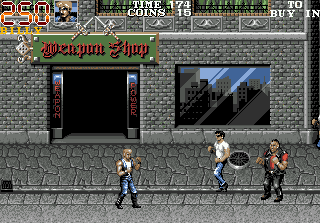 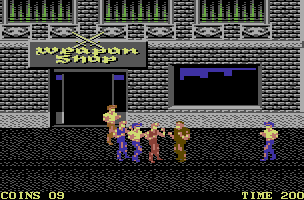 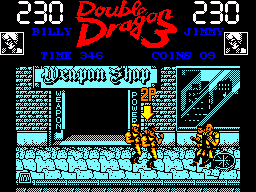 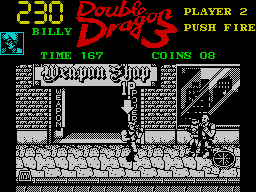